While experiencing more red ink in the current year, Noble Energy executives exuded a positive outlook for the future on Monday, emphasizing the company’s significant acreage in more major U.S. unconventional plays since closing its $2.1 billion acquisition of Rosetta Resources Inc. with more than 100,000 acres in the Permian Basin and Eagle Ford Shale (see Shale Daily, May 11). 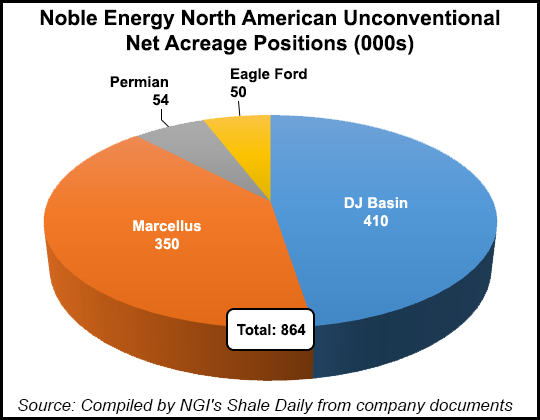 With a recent history of focusing on the U.S. onshore in the Denver-Julesburg (DJ) Basin and Marcellus Shale, Rosetta gives Noble what its executives described Monday during an earnings conference call as “premier positions” in both the Permian Basin and Eagle Ford. While reporting record 2Q2015 production in the Marcellus of 427 MMcf/d, the continued depressed price environment caused Noble to lay down its last operating rig there.

“Over the last few years we have dramatically improved performance in the DJ Basin and transferred and accelerated those margins in the Marcellus,” said Noble’s Gary Willingham, executive vice president for operations. “With the additions of the Eagle Ford and Delaware Basin [in the Permian] we’re confident that our operational expertise will again unlock incremental value.” He said Noble sees “a lot of room” to improve operations further in those basins.

Despite reporting losses for the 2Q2015 and the first six months this year (a loss of $109 million, or a negative 28 cents/share, and loss of $131 million, or a negative 35 cents, respectively), CEO David Stover insisted that Noble is “well positioned with exceptional assets and strong operating and financial capacity to navigate through today’s choppy seas.

“The real driver for the rest of the year will be the activity and performance on the remaining four rigs in the DJ,” said Stover, noting that at the start of the year in the midst of the commodity price plunge, Noble reduced its rig count from 10 to four, but with increased efficiency and longer laterals, the remaining four rigs are doing about 70% of what previously was drilled by the 10 rigs.

In response to questions from analysts, Stover and Willingham covered plans in the other three major onshore U.S. areas where Noble is active: the Marcellus, and with the Rosetta-acquired positions in the Eagle Ford and Permian in Texas. In the Marcellus, Noble will stop drilling when the last horizontal rig operating is laid down later this quarter, despite the 70% increase in production in 2Q2015, compared to the same period last year.

“This is not the time to be drilling in the Marcellus given the current outlook on gas prices, but with an inventory of completions there, we’ll still be ramping up the rest of this year and into next,” Stover said. “The real impact of the current ceasing of any drilling activity won’t be felt until late 2016 and into ”17. And when we eventually decide to ramp back up will depend on outlook for gas prices; we’ll be ready to accelerate when it makes sense.”

In the Eagle Ford, Noble executives are bullish about the South Gates Ranch and the natural gas liquids (NGL) potential longer term. Stover said NGL prices likely won’t improve this year, but next year things could start to change. “We have access to the Gulf Coast and those markets, but NGLs are just one part of the equation when we look at the overall economics,” he said. “The Eagle Ford, particularly in South Gates Ranch, stacked up with everything and anything.”

Stover is looking for some improvement in NGL pricing in 2016-2017 with the advent of additional export capacity, according to a clarification he gave to an analyst’s question. “I think it is going to take something like that [more export capacity] to really change the outlook,” he said.

In the Permian’s Delaware Basin, the focus for Noble is on the Wolfcamp-A horizon, looking at how to “most effectively drain” that whole formation. “There may be opportunities to have multiple laterals, and also start to pick up some of the Bone Spring drainage,” Stover said, adding that Noble’s drilling in the Permian should start to ramp up in 2017 and 2018.

In response to another question, Stover said he would not rule out going after additional assets in the Permian and Eagle Ford to add to the Rosetta acquisition, but that isn’t his focus right now. “We’re focused on execution, and I think you can see that in what we have delivered in the first half of this year, and what we’re set to deliver in the last half.”

At the time of the Rosetta $2.1 billion, plus another $1.8 billion in assumed debt, purchase, Noble senior executives touted the acquisition of liquids-rich assets including 50,000 net acres in the Eagle Ford and 56,000 net acres in the Permian (46,000 acres in the Delaware Basin and 10,000 acres in the Midland Basin). Noble already had identified more than 1,800 gross horizontal drilling locations for development, equating to what it estimated was net unrisked resource potential of about 1 billion boe.

The Rosetta assets produced 66,000 boe/d in the first quarter this year, and year-end 2014 proved reserves were 282 million boe. More than 60% of Rosetta’s production and proved reserves are liquids, according to Noble, which said it expects compound annual production growth from the assets over the next several years to be about 15%.