Noble Energy Inc. is adding two rigs to its Texas operations in the final three months of the year, one in Eagle Ford Shale and another in the Permian Basin’s Delaware formation, following strong production growth in the third quarter. 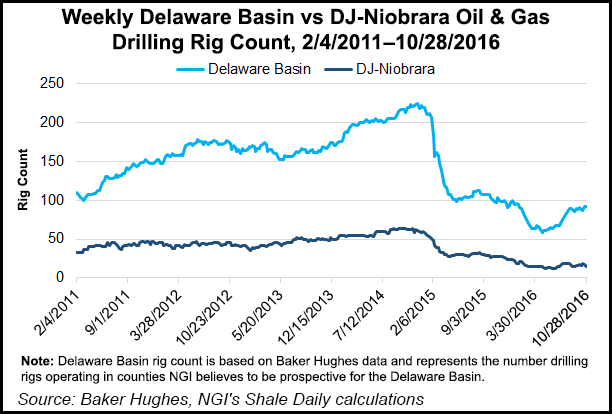 The Houston-based super independent, which works across the U.S. onshore, Gulf of Mexico (GOM) and overseas, achieved third quarter sales volumes of 425,000 boe/d, a 12% increase from a year ago and 8% pro forma for sales.

“Once again, the strength of our high-quality asset base and operational execution was on display in the third quarter,” CEO Dave Stover said. “This was demonstrated by our continued outstanding production performance and cost control.”

Natural gas accounted for 57% of total production, with liquids comprising 43% — 29% crude oil/condensate and 14% natural gas liquids. Total oil volumes of 123,000 b/d primarily were driven by outperformance in the DJ, GOM and West Africa.

Nearly 85% of capital spend during the three-month period was allocated to U.S. onshore development.

Noble now has six rigs working the U.S. onshore, two each in the Delaware, DJ and Eagle Ford Shale.

Between July and September, 43 wells were ramped up in the DJ, with average proppant/lateral foot increasing to 1,600 pounds. Wells Ranch and East Pony combined production rose 11% year/year.

DJ sales volumes averaged 113,000 boe/d, weighted 68% to liquids, 32% to natural gas. Horizontal production represented 97,000 boe/d, up 6% from a year ago. Combined volumes for Wells Ranch and East Pony averaged 59,000 boe/d, which was 11% higher. Noble drilled 23 wells in the DJ during the quarter with average lateral lengths of 9,000 feet-plus, all in Wells Ranch and East Pony. It ended September with 28 wells drilled but uncompleted (DUC). A new long lateral drilling record was set at 9,853 feet in the DJ, with a spud-to-rig release of 4.75 days.

In Texas, combined production from the Eagle Ford and Permian totaled 61,000 boe/d, up 11% from 3Q2015 pro forma, weighted 64% to liquids and 36% to natural gas. Eagle Ford production made up 84% of the volumes with the Permian delivering 16%. During the quarter, 33 Eagle Ford wells were shut-in for up to one month to perform offset fractures.

Noble drilled and ramped up six wells in Texas during the third quarter; five in the Eagle Ford and one in the Delaware. The Delaware well was Noble’s first long lateral at 7,750 feet. As an example of how much proppant use is increasing, Noble’s Johnny Ringo 8 3H well, a Wolfcamp A well in Delaware, had a lateral length of 4,691 feet that was completed using slickwater and 2,500 pounds of proppant/lateral foot. Production also began on the fourth operated well in the Delaware sub-basin with an initial production rate over 30 days of 1,560 boe/d, or 333 boe/d per 1,000 lateral feet.

At the end of September, Noble had 39 DUCs in Texas, with 25 in the Eagle Ford and 14 in the Delaware.

Marcellus volumes averaged 557 MMcfe/d in the quarter, 13% more than in the year-ago period. Natural gas represented 89% of the volumes. No wells were drilled or ramped up in the three-month period, but six wells were completed. At the end of October, Noble held a 100% ownership in 20 DUCs in the Marcellus.

The company in September launched Noble Midstream Partners LP as a public offering, and at the end of October it ended its joint venture in the Marcellus Shale with Consol Energy Inc. (see Shale Daily, Oct. 31; Sept. 15).

“Year to date, we have operated our business within organic cash flows while also monetizing nearly $1.5 billion in assets,” Stover said. “Improving our balance sheet has positioned our business for activity acceleration and allowed us to pay down debt. We have already added an additional two rigs to our Texas assets in the fourth quarter and I would expect that we will further increase activity in the near future. Tremendous performance has ensured a bright future for Noble Energy.”

Driven primarily by accelerated onshore drilling programs, Noble has raised capital spending for the fourth quarter to $425-475 million, with 70%-plus to be allocated to the U.S. onshore. Fourth quarter production guidance is maintained at 400,000-410,000 boe/d.

*Correction: In the original story, NGI incorrectly reported some of Noble Energy Inc.’s 3Q2016 results. The company’s net losses fell to $144 million (minus 33 cents/share) from a year ago when losses totaled $283 million (minus 67 cents). Revenue increased to $910 million from $819 million. Operating expenses fell to $1.16 billion from $1.29 billion. The operator now has two rigs in the Denver-Julesburg Basin and is adding a rig in the Eagle Ford Shale and one in the Permian Basin’s Delaware formation. NGI regrets the errors.