Noble Energy Inc., which has an extensive oil and natural gas leasehold in Colorado, is expecting a state ballot measure that would restrict drilling to go down to defeat in next Tuesday’s election, the CEO said Thursday. 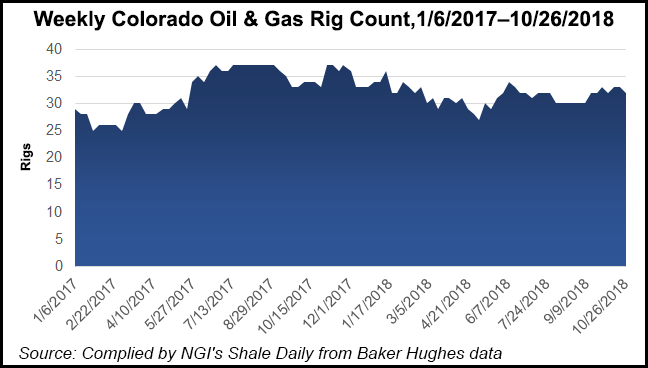 Speaking with analysts during a conference call to discuss third quarter results, CEO Dave Stover said Houston-based Noble has been “part of the Colorado community for many years,” taking a leadership role to oppose Proposition 112. It it were to pass, which is still questionable, it would expand setbacks to 2,500 feet from 500 feet for residences and workplaces, as well as “vulnerable areas.”

Noble employees in Colorado worked to help the communities in the Denver-Julesburg (DJ) Basin “understand the substantive negative impacts” the ballot item “would have on the state’s economy,” Stover said. “While the results of the vote will not be known until next week, I remain confident that the measure will be defeated.”

Less than two months ago, he said, a “very small percentage of the public even knew what this Prop 112 was. When you go out now and look at it, probably…three quarters of the public now knows what that is,” the result of education programs. “I think that’s the benefit that we’re seeing up there” and why he feels confident it will be defeated.

In any case, investors should “rest assured” about the future of Noble’s Colorado operations, said the CEO. Noble has “completed thorough contingency planning and has plans in place for all potential outcomes. I want to reiterate that we have been strategic in how we have set up our DJ Basin position.

“Through a number of transactions over the past several years, we have concentrated our acreage in the oil-rich rural areas of the basin. In the meantime, we’ve also been protecting our drilling inventory through proactive permitting…”

Noble’s Colorado operations actually are expanding, and the company is working to increase its gathering and processing partnerships. In the DJ, the Mustang integrated development plan now has 31 wells online, producing a gross rate of 27,000 boe/d. And earlier this week, Noble also received regulatory approval for a comprehensive drilling plan for a 100 square-mile position in Mustang to accelerate across its 75,000 net acres.

In any case, Noble, like its Colorado peer Anadarko Petroleum Corp., does not rely solely on the DJ, with substantial acreage worldwide from which to pick and choose, including in the Permian Basin, Eagle Ford Shale, offshore and overseas.

However, Stover expressed some concerns about the “tremendous volatility” he has seen over the past month from “market concerns about global trade impacts, supply uncertainties from the pending Iran sanctions and overall, capital efficiency questions about this industry. The market disconnect from energy stocks and commodity price seems overdone.”

In the past few weeks, he said, U.S. publicly held exploration and production companies have lost about $100 billion in market cap, “which is truly astonishing to me, in light of where oil prices are and the growing uncertainty as to whether supply can keep pace with global demand over the next few years.

“This is despite the fact that we are seeing more commitment to shareholder returns and capital discipline than I can remember, against a backdrop of constructive oil market fundamentals.”

During the third quarter, sales volumes climbed 8% year/year to 345,000 boe/d, with all of the business units at or above the midpoint of guidance.