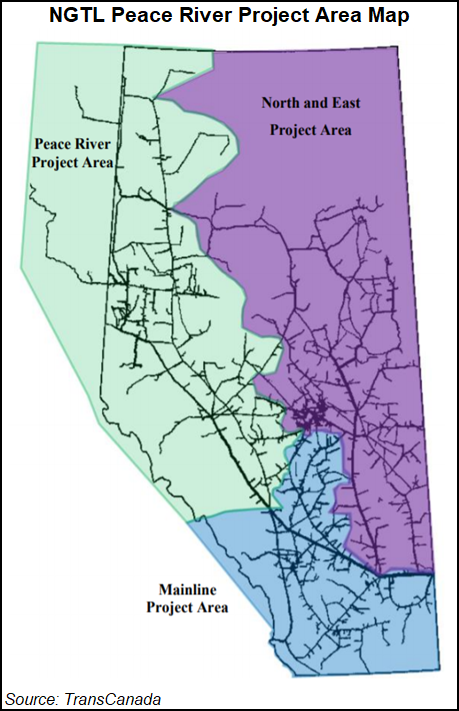 A construction application to the National Energy Board (NEB) calls for adding 344 kilometers (206 miles) of jumbo pipe, 48 inches in diameter, and three compressors to the NGTL web to fulfill new delivery bookings as of April 21, 2021.

The growth package indicated natural gas supply connected to NGTL is forecast to grow to 13.4 Bcf/d in 2021, up 40% from the current 9.5 Bcf/d. TransCanada’s annual five-year capital plan for NGTL is predicting traffic will grow to 7 Bcf/d onto the Mainline, which serves cross-border links into the United States and Eastern Canada.

NGTL carries about three-quarters of Western Canada Sedimentary Basin (WCSB) gas production, which is forecast to rise steadily by 40% to 22.5 Bcf/d in 2030 from 15.8 Bcf/d today.

NGTL’s 2021 expansion program highlighted accelerating WCSB industry concentration on tapping liquids-rich formations with horizontal drilling and hydraulic fracturing. The new facilities cater to supply development of the Montney and Duvernay structures straddling northern BC and Alberta in a region that NGTL calls its Peace River Project Area, or PRPA for short.

Growth is already strong. Since 2013, when shale/tight gas district production was 6.4 Bcf/d, or 63% of NGTL gas traffic, the northern PRPA share of the grid total has risen to 8.6 Bcf/d, or 76%. By the expansion project’s 2021 completion, NGTL predicts PRPA gas will hit 11.3 Bcf/d and account for 85%of supplies on its pipeline grid.

Markets across Canada and the United States will be big enough to absorb the anticipated increases in Alberta and BC gas prediction, NGTL said.

Western Canadian consumption led by growing Alberta thermal oilsands extraction is forecast to reach 6.7 Bcf/d in 2030, up by nearly one-third from 5.1 Bcf/d today. In eastern regions served by TransCanada’s cross-country Mainline, thermal power generation is expected to increase demand to 4.9 Bcf/d from the current 4.4 Bcf/d.

NGTL is forecasting total U.S. gas demand rising by 27%from 80.6 Bcf/d today to 102.5 Bcf/d by 2030. The Western Canadian pipeline grid is expecting LNG to be the continental industry growth star south of the border, with U.S. overseas exports rising to 13.9 Bcf/d by 2030 from the current 3.3 Bcf/d.