A federal oil and gas auction is scheduled for mid November that once again will offer all of the unleased areas of the Gulf of Mexico (GOM) for development. 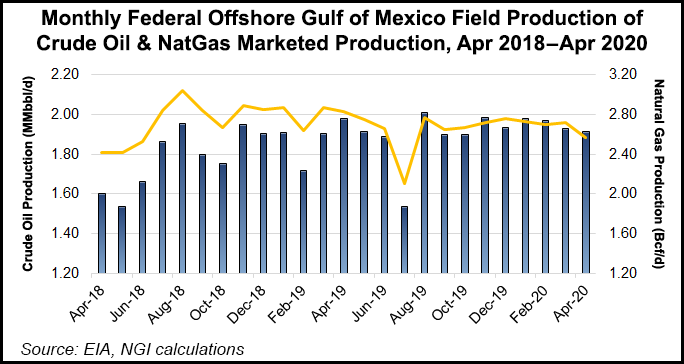 The Interior Department’s Bureau of Ocean Energy Management (BOEM) said Lease Sale 256, scheduled to be livestreamed on Nov. 18 from New Orleans, would be the seventh under the 2017-2022 Outer Continental Shelf (OCS) Oil and Gas Leasing Program.

The auction originally had been scheduled for August, but federal officials wanted to assess the impact of Covid-19 on U.S. oil and gas markets. The auction would offer about 78 million acres for oil and gas development on the OCS.

Since the Trump administration began overseeing the auction, two lease sales have been held each year and include all available blocks in the combined Western, Central, and Eastern Gulf of Mexico Planning Areas.

Lease Sale 256 is to include 14,755 unleased blocks that are three miles to 231 miles offshore in water depths of 9-11,115 feet (3-3,400 meters). Excluded from the auction are  blocks subject to the congressional moratorium established by the GOM Energy Security Act of 2006; blocks adjacent to or beyond the U.S. Exclusive Economic Zone in the area known as the northern portion of the Eastern Gap; and whole blocks and partial blocks within the current boundaries of the Flower Garden Banks National Marine Sanctuary.

Revenues from the leases are directed to the National Parks and Public Land Legacy Restoration Fund, as well as to the U.S. Treasury, the Land and Water Conservation Fund, the Historic Preservation Fund, as well as Texas, Louisiana, Mississippi Alabama. Awarded leases include stipulations to protect biologically sensitive resources, mitigate potential adverse effects on protected species and avoid potential conflicts associated with oil and gas development in the region.

BOEM has included fiscal terms that take into account market conditions. Terms include a 12.5% royalty rate for leases in water depths of less than 200 meters. There is a royalty rate of 18.75% for all other leases.

“Under this stipulation BSEE has 75 days to approve an APD or APM after the application has been received, with some exceptions,” BOEM noted. “This change is being made to facilitate efficient exploration and development of a lease area, consistent with all current practices pertaining and safety and environmental laws.”

Bids are permitted by mail only for Lease Sale 256, and walk-in bidding is not permitted. Check the filing for additional information.