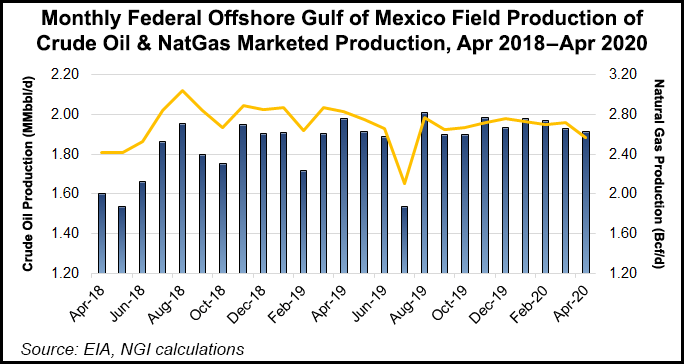 A federal offshore oil and gas lease set for August has been delayed for three months to assess the impact of Covid-19 on U.S. oil and gas markets.

The Department of Interior’s Bureau of Ocean Energy Management (BOEM), which oversees the offshore auctions, rescheduled the Gulf of Mexico (GOM) Lease Sale 256 to November.

The rescheduling was done “to conduct additional analysis to consider recent changes in the oil and gas markets, which were due in part to the Covid-19 pandemic,” BOEM said.

BOEM’s Mike Celata, who directs the GOM Region, said, the GOM is “one of the most productive basins in the world,” and its development “is essential to our nation’s energy security.”

The latest sale mirrors all the other six auctions undertaken by the Trump administration in the 2017-2022 Outer Continental Shelf (OCS) Oil and Gas Leasing Program, which again is offering all unleased acreage, or nearly 79 million acres. Around 14,755 unleased blocks would be available in the auction, to be live streamed from New Orleans.

Revenue from the leases, including high bids, rental payments and royalty payments, are directed to the U.S. Treasury, Texas, Louisiana, Mississippi and Alabama, as well as the Land and Water Conservation Fund and the Historic Preservation Fund.

None of the region-wide auctions have generated strong interest. In last August’s GOM Lease Sale 253, bids were tailored by producers to deepwater areas with existing infrastructure. Of the 14,585 blocks on offer at that time, the auction attracted 165 bids total from 27 operators. Only 151 total blocks received bids, with combined high bids of $159.39 million.

Per usual, leases excluded from the auction include blocks subject to the congressional moratorium established by the GOM Energy Security Act of 2006, blocks adjacent to/beyond the U.S. Exclusive Economic Zone in the area known as the northern portion of the Eastern Gap, and whole/partial blocks within the current boundaries of the Flower Garden Banks National Marine Sanctuary.

Fiscal terms include a 12.5% royalty rate for leases in water depths less than 200 meters, and a royalty rate of 18.75% for leases in deeper depths.Bids issued to regulators that are included in the Proposed Notice of Sale information package are only accepted by mail because of the pandemic, BOEM noted. The notice was to be published in the Federal Register.