Natural gas forwards basis markets entered April with nary a whisper, shifting no more than a few cents at most pricing hubs as mild weather continued to keep prices steady. 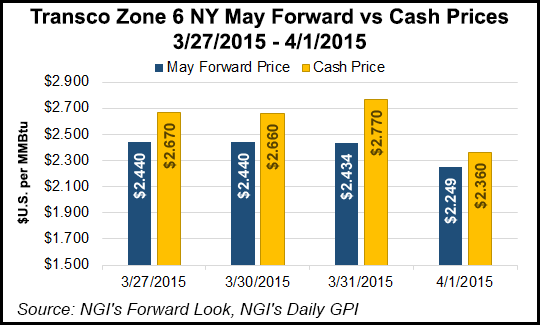 The lone exception to the overall stabilization in prices was in New York, where prices crumbled midweek following double-digit declines in the cash market.

Transco zone 6-New York May basis tumbled 9.7 cents between Friday March 27 and Wednesday April 1 to land at minus 29.6 cents/MMBtu, according to NGI’s Forward Look.

The bulk of the decline at New York occurred Wednesday, when cash prices fell more than 40 cents thanks to lower power demand and continually moderating weather aside from a brief cold blast this weekend.

“As the second week of April unfolds, the reservoir of frigid Canadian air will finally retreat northward, and while weather systems will continue into the northern U.S., they will fail to tap into any truly cold Arctic air,” forecasters with NatGasWeather said. “Therefore, apart from a brief cool down this weekend, weather patterns are shaping up to be relatively mild for early Spring.”

And while Texas Eastern Transmission zone M3 cash prices also shed more than 40 cents in Wednesday trading, forward prices brushed off the declines as the market hub experienced considerable weakness the prior week.

In fact, TETCO M3 May basis picked up 4 cents between Friday and Wednesday to reach minus 94.4 cents/MMBtu, and June basis tacked on 2.3 cents to hit minus 87.3 cents/MMBtu. The balance of summer was up just 1.7 cents to minus 88.6 cents/MMBtu.

Elsewhere in the US, changes in the prompt-month were even more muted.

In California, prices hardly budged even as the state imposed the first mandatory water restrictions to deal with the ongoing drought in the state.

California Governor Jerry Brown directed the State Water Resources Control Board to impose a 25% reduction on the state’s 400 local water supply agencies, which serve 90% of California residents, over the coming year.

State officials earlier this week indicated snowpack levels to be just 6% of normal.

Despite the continued bleak water picture, which could provide some support for gas prices as summer demand picks up, Pacific Gas & Electric city-gates May basis slipped 1.8 cents between Friday and Wednesday to plus 21.5 cents/MMBtu, while June fell 4.8 cents to plus 20 cents/MMBtu. The balance of summer was down 6.3 cents to plus 24.2 cents/MMBtu.

In the Pacific Northwest, a region also grappling with expectations of low hydro output this summer, prices also remained unimpressed. Northwest Pipeline-Sumas forward prices were flat through the summer and fell only as much as 1 cent as far out the curve as the winter 2016-2017 strip.

Despite the lackluster activity in the forwards markets through the middle of the week, futures were poised to perhaps offer some direction Thursday after the U.S. Energy Information Administration reported a larger-than-expected 18 Bcf withdrawal from storage.