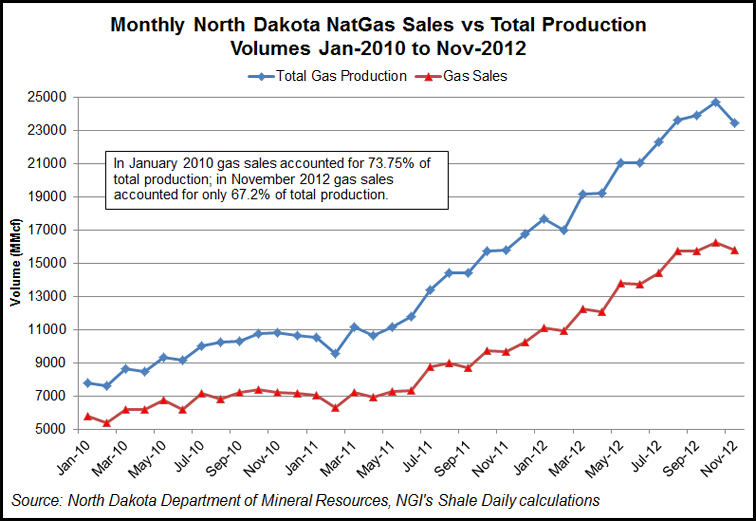 State Sen. Tim Mathern’s bill (SB 2315) would eliminate any “hardship” exemptions after a year, and wells that continued to flare over the one-year limit would have to pay extra royalties and fees to the state.

The head of the North Dakota Petroleum Council (NDPC), Ron Ness, and officials with Oneok Inc., urged that the proposal be rejected at a Senate Natural Resources Committee hearing last week. The debate among lawmakers over the flaring issue “is an important conversation to have, but this isn’t the right approach,” an NDPC official told NGI’s Shale Daily Friday.

Earlier this year another proposal (HB 1134) was submitted to offer tax exemption incentives to operators for two years after they find alternatives for the gas rather than flaring it (see Shale Daily, Jan. 17).

Currently, even with the ability to flare gas for a year without paying taxes or royalties, and beyond that to seek hardship status for extending the practice, some operators are trying to find uses for the gas, including using it to produce electricity to run hydraulic fracturing equipment, and to produce fertilizer (see Shale Daily, Dec. 26, 2012).

Ness told state lawmakers Thursday that “nobody dislikes flaring natural gas more than oil producers or royalty owners,” according to an Associated Press report out of Bismarck, ND.

Mathern said that 95% of the extensions requested during the past two years were granted, and in the past more than 30% of the associated gas produced is burned off and the total volumes have increased as the oil production in the Bakken has surged during the same period.

The NDPC has more than 400 members working in the North Dakota oil and gas fields, mostly in the Bakken and Three Forks areas.