In some cases operators just aren’t drilling and in others they are leaving the state for greener pastures as 2012 continued to be another year for declining natural gas production in Northwest New Mexico’s San Juan Basin, according to the latest state statistics that showed the region produced 780 Bcf last year. 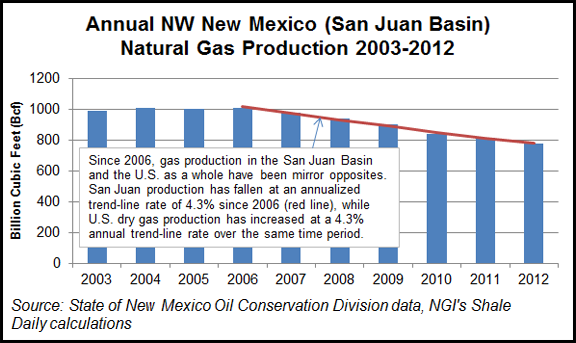 It was the sixth consecutive year of declining gas production in the region, according to New Mexico’s Oil/Gas Conservation Commission (OGCC), which is predicting that the decline will continue this year, hitting the lowest level of the past two decades (733 Bcf) recorded in 1992.

As an indicator of the growing shift of attention toward oil, sponsors of a two-day (March 18-19) conference on the San Juan Basin oil play said the event is sold out.

While the longer-term prospects of the Mancos Shale are viewed positively (see Shale Daily, Feb. 5), major oil/gas players in the region in the recent years of depressed prices for dry natural gas have talked up diverting rigs to more liquids-rich targets in North America (see Daily GPI,July 26, 2012).

The OGCC statistics released recently indicate that San Juan Basin drillers are moving some operations to other states, leaving positions vacant and retooling their drilling programs to focus more on oil.

Northwest New Mexico produced 780 Bcf last year, down 4.2% from the 815 Bcf produced in 2011. Local commentators have said this continues to have a major impact in the region where gas production still dominates, even with the heightened interest in oil. As a result, Dugan said he is not “looking for good times” in the San Juan Basin anytime soon.

Even amidst the adverse economics for gas, New Mexico’s John Bemis, secretary of energy, minerals and natural resources, has proposed a number of initiatives to boost demand for natural gas in his state, which continues to be one of the leading gas producers in the Lower 48.

Since 2006, gas production in the San Juan Basin has been a mirror opposite of total U.S. production, according to New Mexico Oil Conservation Division data and NGI’s Shale Daily calculations. San Juan production fell at an annualized trend-line rate of 4.3% between 2006 and 2012, while U.S. dry gas production increased by 4.3% over the same period.