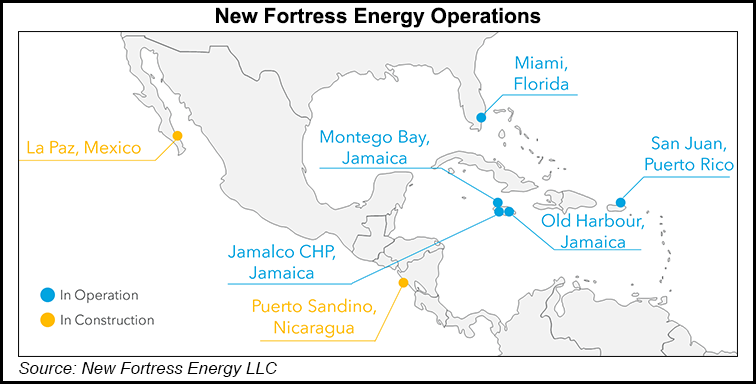 The deal would strengthen NFE’s core business of introducing LNG in markets that lack access for power generation and other needs. The acquisition also expands the company’s LNG import terminals to nine from five that are operational or in development, particularly in Brazil, which is expected to drive LNG demand in Latin America over the next decade.

“With a strong presence in Brazil and a world-class LNG shipping business, Hygo and GMLP are excellent additions to our efforts to accelerate the world’s energy transition,” said NFE CEO Wes Edens. “The addition of Hygo will quickly expand our footprint in South America with three gas-to-power projects in Brazil’s large and fast-growing market. With GMLP, we gain LNG ships and world-class operators that are an ideal fit to support our existing terminals and robust pipeline.”

From Hygo, NFE would acquire an operating FSRU vessel and a 50% interest in a 1,500 MW power plant in Sergipe, Brazil, as well as two FSRU terminals with 1,200 MW under development. Hygo’s fleet also consists of a newbuild FSRU and two operating LNG carriers that will be acquired. NFE also would acquire GMLP’s fleet of six FSRUs, four LNG carriers and a 50% interest in the first two  production units of the Hilli Episeyo, a floating liquefaction vessel.

Under terms of the transaction, NFE agreed to exchange 31.4 million shares of Class A common stock and $580 million for all outstanding shares of Hygo. The Hygo deal has a $3.1 billion enterprise value and a $2.18 billion equity value. NFE also agreed to acquire for $3.55/each all outstanding common units of GMLP, a deal with an enterprise value of $1.9 billion and $251 million equity value. Divesting Hygo and GMLP would reduce the fleet under Golar LNG Ltd.’s umbrella by roughly half.

The Golar companies are pioneers in floating liquefaction technologies. NFE went public last year and has continued to transition into an operational company. NFE operates or is developing small-scale LNG assets across the world, including import terminals, fuel management facilities, regasification infrastructure, gas-fired power plants and midstream facilities in the Caribbean, Europe, Latin America and the United States. In Latin America, NFE expects to bring LNG projects online this year in Mexico and Nicaragua.

The merger deals would give the company a foothold in Brazil, where natural gas power is used principally as a backup for hydropower and is prized for its flexibility. According to the Berkeley Research Group, natural gas-fired power generation in Brazil could grow by 20 GW by 2040, rising to 15% from 9% of the energy mix.

NFE also is expanding in the hydrogen market with an investment in H2Pro, an Israel-based startup developing hydrogen production technology. Through a new division called Zero, it also has partnered on a gas-fired power plant project in Ohio that would blend hydrogen to produce electricity.

NFE shares “our vision to provide cheaper and cleaner energy to a growing population,” said Golar LNG Chairman Tor Olav Trøim. “The consolidation of two of the entrepreneurial LNG downstream players gives the company improved access to capital and creates a unique world-leading energy transition company which Golar shareholders will benefit from being a part of going forward.”