New York City-based New Fortress Energy LLC (NFE) has more liquefied natural gas (LNG) supply than it needs for customers in the Carribean as the Covid-19 pandemic has cut into economic activity and use of the fuel for power generation across the region. 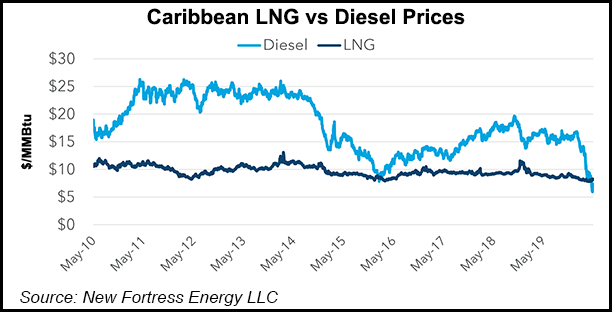 “We’ve got a couple of cargoes extra that we have contracted for that we don’t need right now,” said CEO Wesley Edens during the company’s first quarter earnings call May 5. He said the company would try to sell those volumes in the spot market or shift them to Puerto Rico, where NFE opened a fuel management facility about a month ago to load trucks with LNG for distribution.

The company’s margins were also squeezed by higher gas prices as it worked through legacy cargoes that were purchased before the sharp declines in spot LNG prices that have characterized the market amid the steep supply and demand imbalance.

Management said, however, that as the company continues to grow it will need to secure more LNG supply. CFO Christopher Guinta noted that more than 60% of the company’s current LNG needs are uncontracted.

“Securing long-term supply at low prices is a primary focus and represents a big opportunity to dramatically increase earnings to the tune of billions of dollars,” Guinta said.

New Fortress, which went public last year, is focused on introducing LNG in markets that lack access to the fuel for power generation and other needs.

The company operates or is developing small-scale LNG assets across the world, including import terminals, fuel management facilities, regasification infrastructure, gas-fired power plants and midstream facilities in the Carribean, Europe, Latin America and the United States. In the United States, the company operates a 100,000 gallon/day liquefaction facility in Miami. It’s also developing two small-scale liquefaction plants in Northeast Pennsylvania in the heart of the Marcellus Shale that would feed an export terminal proposed for New Jersey.

Sales volumes are expected to average between 1.5 and 2.5 million gallons/day for the remainder of 2020, but management indicated that they could slow as customer uptake and new projects could hit bumps given the pandemic.

Even still, committed volumes and “in discussion volumes” are over 19 million gallons/day, NFE said. The company has 10 key target markets for growth that also include Africa, India, South America, Southeast Asia and other areas of the Asia-Pacific region.

“The world has not suddenly gotten electrified on its own or attained its own gas,” Edens said. “So there’s a lot of new business prospects for us still out there. Covid has obviously impacted our customers, but power and gas are essential.”

He said that travel limits around the world are making it more difficult to get new projects off the ground. “We have become very familiar with Zoom calls,” he said of the videoconferencing platform. “I had a Zoom call with an energy minister yesterday, I’ve got one here later this morning. So, everyone is adapting to this new world without being able to travel, but I’m hopeful that that will ease soon.”

Edens said LNG remains very competitive with other fuels, particularly in the Carribean, even as oil prices have plummeted. He said that only during 15 days of the last 10 years was it more economic to burn diesel than it was to burn natural gas.

“So our value proposition remains intact,” Edens added. “And this, of course, is just the beginning of it. In addition, you’ve got a much, much better environmental profile, you have much lower maintenance of your equipment. So, we feel very good about our position with this. We’ve seen no pullback whatsoever from our customers considering a switch from oil to gas.”