The nation’s benchmark environmental protection law, signed by President Nixon 50 years ago, may be eased under an overhaul unveiled Thursday by the Trump Administration, which if it were to clear legal obstacles, would strip constraints on constructing natural gas and oil pipelines, power plants and other major infrastructure projects.

The landmark National Environmental Policy Act (NEPA), which touches almost every significant infrastructure project in the country, has been under assault by the gas and oil industry for years. NEPA requires thorough impact assessments of major projects and allows the public to weigh in before a shovel is allowed to break ground.

“The administration is committed to ensuring that we are good stewards of our environment, while supporting American prosperity,” President Trump said during a press conference Thursday. “Modernizing environmental regulations will help bring new infrastructure projects to our communities that benefit American workers, farmers and families.”

The White House proposal, which is to be published as a proposed rulemaking in the Federal Register on Friday, would narrow NEPA oversight using a new “nonmajor” category and redefine a “major federal action” to exclude privately financed projects with minimal government funding or involvement. Public comments would be accepted until March 10.

Bernhardt said the NEPA revisions would result in a “home run in delivering better results to the American people by cutting red tape that has paralyzed common-sense decision-making for generations.” He cited the numerous projects slowed by NEPA.

“The list goes on and on and on,” and the slowdown has “lowered the expectations of American exceptionalism and influence.”

Basically, federal agencies would be given the green light to approve major infrastructure projects with limited oversight. It would be less cumbersome to build most pipelines overseen by federal authorities, including the Keystone XL and Dakota Access oil pipelines, which have suffered years of delays in some form.

The NEPA revamp, however, would not directly impact state oversight of infrastructure.

According to the White House Council on Environmental Quality (CEQ) established under NEPA, two-year deadlines for environmental impact statements (EIS) would be mandated, and pages included in the reviews would be limited.

Also proposed to be scaled back is the definition of cumulative environmental “effects,” which could make it more difficult to include climate impacts in an analysis.

The Interstate Natural Gas Association of America (INGAA) and other industry groups hailed the move.

NEPA “is an important law that is intended to ensure good public policy and informed decision-making,” CEO Don Santa said. “However, since the law passed 50 years ago, the corresponding NEPA regulations have not undergone a significant review. The lack of clarity in the existing NEPA regulations has led courts to fill the gaps, spurring costly litigation, and has led to unclear expectations, which has caused significant and unnecessary delays for infrastructure projects across the country.

“The Council on Environmental Quality’s proposed rule is an important step in restoring the intent of NEPA by ensuring that federal agencies focus their attention on significant impacts to the environment that are relevant to their decision-making authorities,” Santa said. “Restoring efficiency in the NEPA review process will enhance safety, improve environmental outcomes, and ultimately deliver cost benefits to consumers.”

The Independent Petroleum Association of America (IPAA), which represents independent producers that develop 91% of U.S. gas and oil wells, hailed the potential overhaul.

“IPAA is pleased that the administration continues to tackle substantial projects, such as their effort to return the NEPA process to the original intent and scope of the law,” Senior Vice President Dan Naatz said. He oversees government relations and political affairs.

“Although IPAA and our members recognize the important role NEPA plays in public land policy, for many years we have seen the law being abused by environmentalists with extreme agendas to delay and halt various multiple-use activities on federal lands, including oil and gas production,” Naatz said.

“The NEPA process was established over 40 years ago to ensure an appropriate level of environmental protection is achieved, however, there are many projects that can move forward with the flexibility granted through an environmental assessment and environmental impact statement process. Just as the geology, hydrology, and topography of our federal lands differ from state to state, so too should the NEPA process become more project-based rather than one-size-fits-all.”

A coalition of industry groups including the U.S. Chamber of Commerce, American Petroleum Institute and American Chemistry Council on Thursday launched Unlock American Investment, a website to support the overhaul.

Last November 34 industry groups, led by the U.S. Chamber, sent a letter to CEQ Chair Mary Neumayr asking her to “modernize NEPA processes,” as it now takes nearly six years on average to complete an EIS.

“If America is to meet its growing challenges on infrastructure, energy and the environment, then we must modernize the 40-year old NEPA process,” Chamber CEO Tom Donohue said. “In many cases, it takes far longer to obtain a permit than it actually takes to build one of these critical projects, and that should not be acceptable.

“That’s why the Chamber strongly supports the administration’s efforts to streamline permitting processes, and why we are leading a broad coalition representing the business community and workers to support the new rule.

“We support NEPA’s requirement for environmental reviews and public input. But too often, the current rules are used as a tool to obstruct important projects, such as highways, bridges, public transit and even renewable energy projects. Reducing delays and uncertainties associated with infrastructure investment and related projects will allow businesses to plan and invest with confidence while enhancing economic productivity and supporting more and better-paying jobs throughout the country.”

The Laborers’ International Union of North America (LIUNA), among other unions, also threw its support behind expediting environmental reviews.

“For the hard working members of LIUNA, who have had their livelihoods put on hold as infrastructure projects become mired in a review process that is needlessly long, complex, and lacks transparency, the administration’s anticipated NEPA reforms are a welcome change,” said General President Terry O’Sullivan.

Republican Sen. Lisa Murkowski of Alaska, who chairs the Energy and Natural Resources Committee, welcomed updating NEPA. “While I am still reviewing the details of this proposal, antiquated federal regulations often stand in the way of critical infrastructure and other important projects that can create jobs, improve our standard of living and energy security, and yet still fully protect the environment,” she said. “The president and his advisers deserve credit for leading the charge to bring our 1970s-era permitting processes into the 21st century.”

Legal challenges, likely to take years before NEPA is revised, are a given.

“We live in a democracy, not a dictatorship,” said Natural Resources Defense Council CEO Gina McCarthy. “Americans deserve to have their voices heard before their families’ health and well being are put at risk by projects that bring unwanted and unnecessary pollution and disruption into their communities. While our world is burning, President Trump is adding fuel to the fire by taking away our right to be informed and to protect ourselves from irreparable harm.

“For the past 50 years, NEPA has been an essential part of the public process, providing critical oversight that the federal government relies on to fully understand the potential implications of projects that can harm people’s health and the environment,” McCarthy said. “We will use every tool in our toolbox to stop this dangerous move and safeguard our children’s future.”

The administration’s efforts “to punch loopholes into long-standing protections under the National Environmental Policy Act would put communities at risk and worsen climate change,” Patton said. “The Trump administration has a legal and moral duty to protect all Americans, especially our children, from climate pollution and industrial environmental threats. This unlawful and dangerous action takes our country in the wrong direction.” 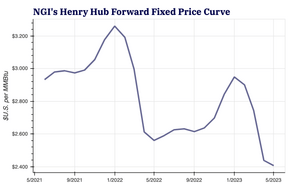 On the strength of exports and domestic consumption, natural gas spot prices at Henry Hub are expected to average $2.78/MMBtu in the second quarter and $3.05 for 2021 overall, the U.S. Energy Information Administration (EIA) said Tuesday. The updated projections, published in the May edition of the agency’s Short-Term Energy Outlook, represent a modest increase…