Natural gas should be viewed not as a bridge fuel, but as a catalyst to the energy transition domestically and abroad, according to the new “Appalachia First” vision unveiled by CNX Resources Corp. 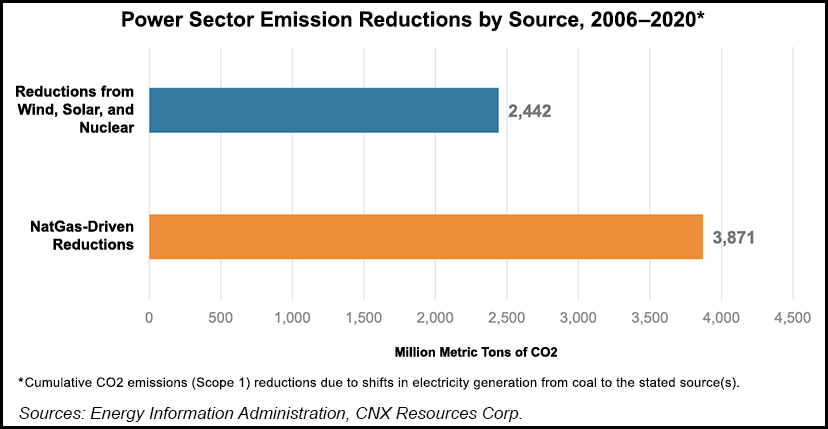 The Pittsburgh-based firm, which produced 1.67 Bcfe/d from the Marcellus and Utica shales during the third quarter of 2022, is arguing against a renewables-focused strategy for the region.

“The nation and world are waking up to stark energy realities: energy scarcity, deterioration of our power grid and energy inflation stoking wider inflation,” said CEO Nick Deluliis. “Policy often relies too heavily on applications such as wind, solar and electric vehicles that can present large life cycle carbon footprints, require supply chains stretching thousands of miles, are costly and face serious challenges when scaling in regions like Appalachia.

“If we don’t get energy and climate policies right, our economic competitiveness will be stifled, the environment will be worse off, and we will end up enabling our adversaries to wage war and forcing leaders to negotiate energy supplies from dictators and despots.”

He cited that natural gas has driven a 40% reduction in Pennsylvania’s electricity-related carbon emissions since 2005, and that gas’ share of the PJM Interconnection LLC electricity mix grew from 14% to 38% between 2011 and 2021. Over the same span, the combined contribution from wind and solar grew from about 1% to just under 4%.

“There is a better, simpler and more logical way,” Deluliis said. “Appalachia can be the launchpad to a more efficient and sustainable future catalyzed by lower carbon intensity natural gas. This proud region and its people should be the solution to deliver reliable and affordable energy – our region’s abundant energy resources can and must be used more effectively to prioritize the improvement of the human condition, the environment, the nation and the world.”

This approach, Deluliis said, represents “a clear roadmap to transform key sectors of our economy and workforce while also changing the world for the better.”

According to CNX, Appalachia should leverage its immense gas reserves to bolster the region’s economy while reducing emissions.

Appalachia has the potential to “transform the sectors of aviation, plastics, rail, cargo, mass transit, trucking, and fleet and passenger vehicles by displacing higher-carbon fuels with locally produced natural gas,” the company said.

Citing that 50% of the U.S. population lives within a day’s drive of the region, Deluliis said Appalachia has the tools to become a low-carbon industrial and logistics hub.

This has led to the cancellation of projects such as the Atlantic Coast Pipeline, and an uncertain future for others such as the Mountain Valley Pipeline.

Policy shifts such as permitting reforms would “drastically improve the likelihood of this vision of Appalachia First coming to fruition,” Deluliis said.