CNX Resources Corp. will increase this year’s capital expenditures (capex) as it battles through inflationary pressures and works to keep its operations stable heading into next year. 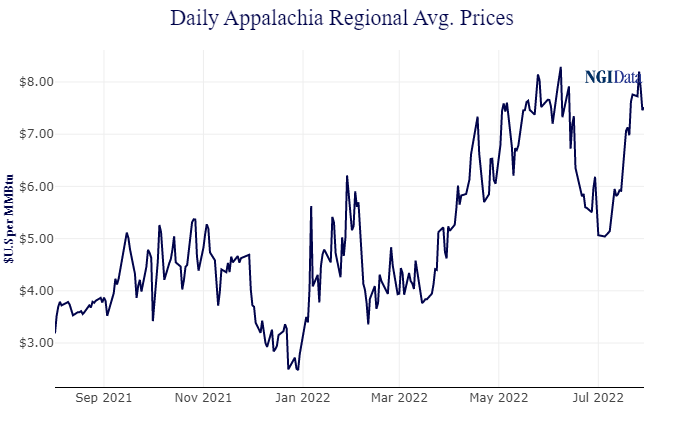 The Appalachian pure-play is now guiding for a 2022 capex range of $550-590 million, up $70 million at the midpoint from its previous forecast.

“We are planning to run a second rig for almost the entirety of the second half of the year to ensure there are no delays to our 2023 schedule, and we are pre-buying and locking in key tangible goods and services,” said CFO Alan Shepard during a recent call to discuss the company’s second quarter results.

Plans to keep a second rig running and accelerate three well turn-in-lines are forecast to cost  $25 million, while $15 million has been allocated for innovation and emissions reductions, and another $30 million has been earmarked for rising costs related to inflation.

While other independent producers across the country have shared ambitions to gain more exposure to international markets through LNG exports, CNX management continues to stress a more local approach.

“CNX is going to continue to advocate for natural gas and the Appalachian region,” said CEO Nicholas Deluliis. He noted during the Pittsburgh-based company’s first quarter earnings call in April that the basin has a limited ability to ramp up production to help meet overseas natural gas demand due to pipeline constraints.

The company has been pursuing local projects for what management said have been marginal costs. CNX recently expanded a partnership with the Pittsburgh International Airport, where it operates shale gas wells. The company plans to develop more wells at the airport to produce liquefied natural gas and compressed natural gas for use in ground transportation and aviation.

The company also recently partnered with a California-based technology company to capture methane to manufacture a biodegradable polymer.

“At CNX we focus on the near-term tangible actions rather than hypothesizing as to what may or may not occur decades into the future,” he said, stressing that natural gas is “not a bridge fuel – it’s a catalyst fuel” with an immediate ability to lower greenhouse gas emissions.

The company’s move to increase spending to avoid delays to the 2023 schedule ties in with a seven-year plan it laid out during the Covid-19 outbreak in 2020 aimed at stable operations and free cash flow (FCF) generation.

CNX reported $62 million in FCF during the second quarter, its tenth consecutive period of FCF generation.

The company, one of the leading Marcellus and Utica shale producers, reported second quarter production of 142.3 Bcfe, up from 137.9 Bcfe in the year-ago period.

It also benefited from higher commodity prices. Including hedges, the company’s average realized price for the period was $3.32/Mcfe, up from $2.60 in 2Q2021.

As a result, revenue jumped to $420.4 million during the second quarter, compared to negative revenue of $127.2 million at the same time last year, when the company was impacted by losses on derivatives.