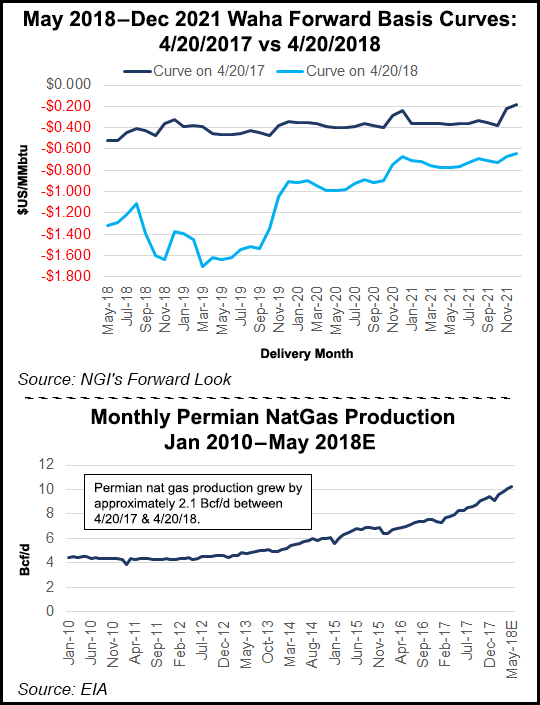 Nymex futures led the way, although most of the action throughout the week was rather muted as daily swings were generally limited to less than a couple of cents. That changed on Thursday, when the Nymex May futures contract dropped 7.9 cents to settle at $2.66.

With declines of 4 cents or more seen across the futures curve through Calendar (Cal) 2022, “it is often heavy producer selling that causes an almost parallel term structure shift,” Mobius Risk Group analysts said. Losses were slightly greater at the front of the curve, however, which also indicates there could have been a speculative unwind in the market as well, analysts noted. For reference, the most recent Commodity Futures Trading Commission commitment of traders report showed the speculative community still holding more than 100,000 lots of net length.

Technicals aside, the gas market also was hit with news that the start-up of the first liquefied natural gas (LNG) train at the Freeport LNG terminal on the Texas Gulf Coast would be delayed until September 2019. “Slippage in the originally scheduled in-service of late 2018 could have caused associated long positions to be unwound,” Mobius said.

Indeed, the long-term effects of the delayed exports proved to be of far more importance to the market than an otherwise bullish storage report from the U.S. Energy Information Administration (EIA). The EIA reported a a 36 Bcf withdrawal from Lower 48 gas stocks for the week ending April 13, an unusual pull from inventories during injection season thanks to uncharacteristically cold weather during the period. Last year, 47 Bcf was injected, and the five-year average is a build of 38 Bcf.

Immediately after the number reached trading desks at 10:30 a.m. ET on Thursday, the May contract added close to 3 cents, gaining back a chunk of what it lost after selling off to as low as $2.676 earlier in the session. By 11 a.m. ET, May was trading around $2.730, down about a penny from Wednesday’s settle.

But with Lower 48 dry gas production holding in the upper 70 Bcf range and expected to continue growing throughout the summer, the implications of the Freeport LNG delay negated the widening storage deficit.

“The result will be a chunk of demand not arriving for the first two thirds of 2019 even as production swells,” Bespoke Weather Services said, pointing to selling Thursday further along the strip into 2019. “Those contracts broke lower on the day and barely flinched after a bullish EIA print, eventually dragging the rest of the strip lower as the prompt contract settled near the low of the day.”

Still, there are analysts who believe the current futures strip is undervalued. Societe Generale (SocGen) analysts noted that the market is on track for a record low April storage injection pace, below 2 Bcf/d, compared to 7.6 Bcf/d last year and a five-year average of 7 Bcf/d.

“Our end-of-October storage level has been consistently trending in the 3.55-3.65 Tcf range. We do not see this as a precarious level to start winter 18/19, even though it is very near the historical low seen in 2014; however, we do think the curve is undervalued at that storage level,” SocGen natural gas analyst Breanne Dougherty said.

If the trajectory shifts above 3.75 Tcf, the investment bank could see “more legitimacy” to current prices, “but right now there is no visibility on that level of net injection being achieved. At sub-1.3 Tcf as of week ended 13 April, there is a long way to go,” she said.

Declines were steepest at the Waha Hub, where robust associated gas production in the Permian Basin remains trapped with little takeaway capacity to move that gas to demand markets. The issue is one that began affecting Waha and other supply hubs last year — and should continue to do so until late next year at the earliest — as basis differentials dropped far below Henry Hub.

Other supply hubs outside the Permian also have been affected by the growing production. While most of the recent production growth has been concentrated in the Permian, supply is also growing in the Marcellus and Utica shales, the Haynesville Shale and in the Rockies, leaving the country awash in supply at one of the lowest demand periods of the year.

On a call April 18 to discuss quarterly earnings, Kinder Morgan Inc. (KMI) CEO Steven Kean said the company is doing what it can to aleve some of the constraints in the region. In addition to KMI’s Gulf Coast Express project, a $1.7 billion proposed project that would carry 1.92 Bcf/d from the Permian to the Texas Gulf Coast, the company also has signed up about 1.2 Bcf of Permian capacity on its El Paso Natural Gas transmission lines.

These are “short-haul moves,” and the expansion capital required is “very modest” for a little more than $30 million, Kean said. “This illustrates the value of having pipe in the ground while overall utilization of the network is climbing as a result of a growing supply and demand, including export demand.”

With little demand to speak of in California, most markets in the area retreated in line with Nymex futures and the rest of the country. But ongoing pipeline restrictions that were recently extended helped keep May forward prices at the SoCal City-gate relatively support.

Southern California Gas Co. (SoCalGas) on Wednesday said it was “extending its L3000 maintenance for an additional four and a half months past the previously expected completion date of May 1, which means that import capacity will continue to be notably constrained throughout the summer,” Genscape analyst Joe Bernardi said. This work is limiting operational capacity at SoCalGas’ two Topock receipt points to zero.

“Before reductions took effect in early 2016 at these points, they had brought on an average of 324 MMcf/d,” Bernardi said. “This maintenance has been extended several times, well beyond the initially estimated reinstatement date of Oct. 31, 2016. The newly announced end date is Sept. 17.”

While it appears traders may have been pricing in the possibility of a slight extension in the maintenance, with SoCal City-gate May forwards slipping just 1 cent from April 13-19 to $2.685, the rest of the forward curve posted losses that were mostly in line with Henry Hub. SoCal City-gate June was down 7 cents to $2.728, the balance of summer (June-October) was down 10 cents to $3.01 and the winter 2018-2019 was down 6 cents to $3.36, Forward Look shows. This could leave room for more downside in the forward curve, especially if the summer turns out to be a mild one.