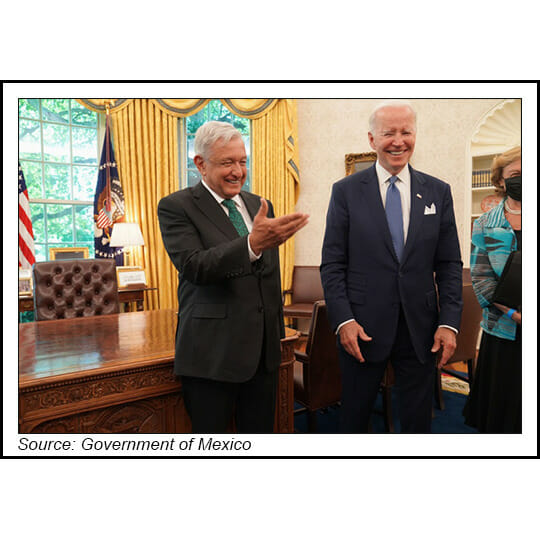 The policies mentioned include a June 2022 directive from Mexico energy ministry Sener that would require natural gas marketers and large consumers to source the fuel from either national oil company Petróleos Mexicanos (Pemex) or state power company Comisión Federal de Electricidad (CFE). A federal judge struck down the rule, though Sener is appealing the decision.

“We have repeatedly expressed serious concerns about a series of changes in Mexico’s energy policies and their consistency with Mexico’s commitments under the USMCA,” said the USTR. “These policy changes impact U.S. economic interests in multiple sectors and disincentivize investment by clean-energy suppliers and by companies that seek to purchase clean, reliable energy.”

The United States also is challenging a 2021 legislative change that prioritizes CFE-produced electricity in the dispatch order over private generators regardless of cost, as well as “Mexico’s inaction, delays, denials and revocations of private companies’ abilities to operate in Mexico’s energy sector,” the USTR added.

The disputed policies also include a December 2019 regulation that gave Pemex an exclusive five-year extension to comply with the maximum sulfur content requirements for automotive diesel fuel, putting non-state fuel suppliers at a disadvantage. Without the extension, Pemex would be required to source low-sulfur diesel from the United States and/or upgrade its facilities to produce the low-sulfur fuel itself.

López Obrador, who took office in 2018, campaigned on a promise to “rescue” state oil company Pemex and CFE. Through legislation and regulatory actions, the president and his allies have sought to walk back the energy market liberalization that began in 2013 and tip the scales in favor of Pemex and CFE.

“Mexico’s policies have largely cut off U.S. and other investment in the country’s clean energy infrastructure, including significant steps to roll back reforms Mexico previously made to meet its climate goals under the Paris Agreement,” Tai’s office said, adding that the policy changes “threaten to push private sector innovation out of the Mexican energy market. To reach our shared regional economic and development goals and climate goals, current and future supply chains need clean, reliable and affordable energy.”

The measures promoted by López Obrador “appear to be inconsistent with several of Mexico’s USMCA obligations, including under the Market Access, Investment, and State-Owned Enterprises chapters,” according to the USTR.

The USMCA requires the parties to enter consultations within 30 days of a request, unless both parties agree not to do so. If the matter is not resolved within 75 days of the request, the United States may request the establishment of a panel.

In a rare joint statement, the heads of the American Petroleum Institute (API) and American Clean Power Association (ACP) weighed in to express support for the USTR’s request.

“We applaud Ambassador Tai for making this request and reinforcing the mutual benefits [that] continued international trade and energy investments can deliver for both Mexico and the United States.”

“We have repeatedly expressed our concerns with the direction of these policies, which have unfairly disadvantaged U.S. companies and are at odds with our common goals of generating reliable energy, sustainable growth and a durable economic recovery,” Herrington said.

He added, “We appreciate the Biden Administration’s attention to these important issues, and we are committed to working with both governments to successfully address them and ensure North America is the most dynamic and competitive region in the world…”

López Obrador, in a Wednesday morning press conference, dismissed and made light of Tai’s allegations. To convey his reaction, he asked an aide to play a music video for a song called Uy, Que Miedo, which roughly translates to “I’m so scared.”

He cited a chapter in the USMCA which recognizes Mexico’s “Direct, Inalienable and Imprescriptible Ownership of Hydrocarbons,” and the country’s right to amend its constitution.

However, the pact also preserves the investor dispute settlement mechanisms from the original North American Free Trade Pact for select industries including oil and gas, a provision for which the industry lobbied aggressively.

The USTR announcement follows an official visit by López Obrador to Washington, DC, during which energy figured prominently in the bilateral discussions.

Despite the recent tension, López Obrador has managed to find at least some common ground with U.S. energy investors.

For example, the president, along with Pemex and CFE, have touted multiple liquefied natural gas export projects planned in Mexico by U.S. firms such as Sempra, New Fortress Energy Inc. and Mexico Pacific Ltd. LLC.