Natural gas exploration is making headway in pockets around the world thanks to U.S. technology, but it’s unlikely to replace coal on a global basis anytime soon, BHP Billiton Ltd.’s chief said Tuesday. 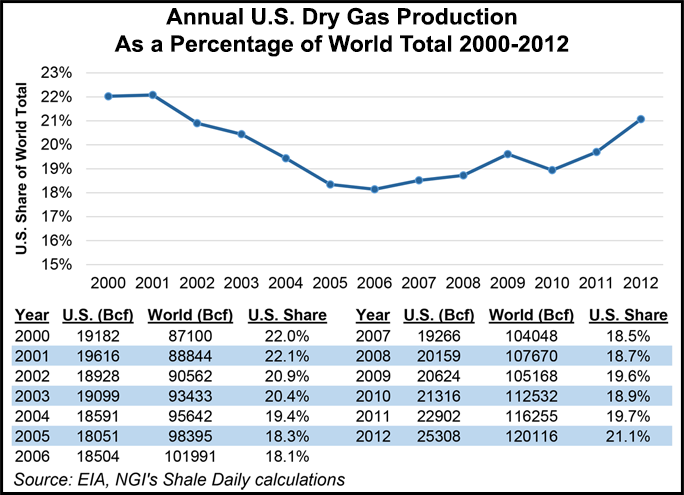 As one of the featured speakers on the second day of IHS CERAWeek, CEO Andrew Mackenzie said he expected the United States to remain the unconventional leader for some time to come. Mackenzie helms the largest mining company in the world.

The “gas revolution is unlikely to go global quickly,” Mackenzie said of domestic shale and tight gas development. “We are unlikely to see gas replace coal globally at the scale and pace seen here in the U.S.”

The Australian conglomerate has about 1.5 million acres in U.S. onshore leaseholds, including the gassy Haynesville and Fayetteville shales. In addition, BHP holds positions in Texas in the Eagle Ford Shale and the Permian Basin. The domestic unconventionals are expected to provide 200,000 b/d of liquids production in fiscal 2017 (see Shale Daily, Dec. 11, 2013).

Mackenzie, who is a trained geologist, bolsters the claims of more than 95% of scientists worldwide who say there is compelling evidence that the climate is changing. There is visual evidence in formations that indicate the effects of climate extremes.

“You can’t argue with a rock,” said Mackenzie. To reverse the trend, a carbon pricing system, or tax, would enable the market ” to identify the most cost-effective methods of cutting emissions.” ExxonMobil Corp., BP plc and other majors have advocated for a carbon tax, but there has been pushback from Congress.

BHP is working to reduce the environmental impacts of coal and other fossil fuels, but a mix of fuel types worldwide will remain in place, said the CEO. The quickly expanding Asia-Pacific marketplace needs all types of fuel to grow, as do other developing regions of the world.

“In the past, we’ve fallen into the trap of saying ‘my fossil fuel is better than your fossil fuel,” but it’s difficult to replace the types of fuels used worldwide as countries attempt to balance energy security and affordability. Critics who want to do away with fossil fuels aren’t acknowledging reality, and they are putting environmental concerns above the need to alleviate poverty, he said.

Coal’s role may diminish over the coming decades but it will remain the dominant source of global electric power, according to Mackenzie.

The BHP chief gave a nod to the debate about whether to allow liquefied natural gas (LNG) and crude/condensate exports from the United States. U.S. LNG export projects are being approved, but he doubts domestic prices will increase when they begin. There are high transport costs to overseas markets, and projects would compete with new facilities carrying gas from, among other places, Australia and West Africa, he said.

Allowing crude products to be exported, however, could encourage global market development and advance free trade policy “for all resources.” Open trading for crude products, he said, would promote energy security and stability around the world and raise the gross domestic product.

Chevron CEO John Watson, who also was a keynote speaker on Tuesday, said rising costs to build projects are a growing concern.

“There is a new reality in our business,” he told the audience. For oil prices, “$100/bbl is becoming the new $20.00/bbl…Costs have caught up with revenues for many classes of projects.”

Watson, too, would like to see the United States lift the crude oil export ban, but he thinks there will be much more debate before any decisions are made. Sen. Lisa Murkowski (R-AK) on Monday advocated again for allowing domestic crude products to be exported (see Daily GPI, March 4).

“I thought the benefits of free trade were established long ago,” said the Chevron chief. “Free trade wins. We ought to get on with it.”

Interestingly, the U.S. share of global dry gas production in 2012 stood about where it did in 2000, but that masks the volatility between that period, according to Patrick Rau, NGI director of Strategy and Research.

“The U.S. accounted for approximately 22% of world dry gas production in 2000 and 2001, but that figure dropped to just 18.1% in 2006,” Rau said, citing Energy Information Administration data. “However, that is right around the time when the unconventional drilling techniques used in the Barnett Shale and Rocky Mountain tight sand formations started to appear in other U.S. basins, such as the Fayetteville, Haynesville, Marcellus and Woodford shales, and the U.S. share of global dry gas production has marched steadily higher, reaching 21.1% in 2012.”