Fueled by stubbornly mild weather and an improved supply outlook, North American natural gas prices fell more than $1 from Monday to Wednesday and closed in on the $4.00/MMBtu mark for the first time since early summer. 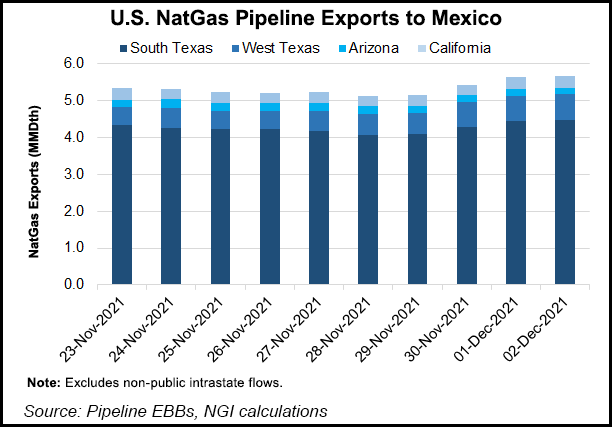 Even as gas prices in Europe continue at record levels, the North American supply/demand and pricing picture has shifted decidedly in recent weeks. Lower 48 production continues to be on an upswing and averaged 94.3 Bcf/d in November, up 1.5 Bcf/d versus October.

The lower prices are fueling higher power burns in Mexico, according to Wood Mackenzie analyst Ricardo Falcón. From Nov. 25 until Wednesday (Dec. 1), Mexico’s natural gas burns for power generation averaged nearly 3.7 Bcf/d, up about 300 MMcf/d over the previous week.

This seems to be “reversing a downtrend that commenced in early September when U.S. benchmarks began to mark the strongest surges/volatility since February of this year,” Falcón told NGI’s Mexico GPI.

Overall Mexico imports of pipeline gas from the United States are off from summer highs, and averaged 5.33 Bcf/d over the past 10 days, according to NGI calculations.

Economic activity remained tempered in Mexico as the manufacturing sector is impacted by supply chain shortages. The Mexican economy shrunk 0.4% in the third quarter, according to the country’s Instituto Nacional de Estadística y Geografía (INEGI).

A Mexico City-based shipper told NGI’s Mexico GPI that industrial gas buying is being impacted by a slowdown in the manufacturing sector. He cited the lack of semiconductors impacting Mexican automaking and driving down demand for steel.

All Eyes On Infrastructure

TC’s Stanley Chapman III, president for U.S. and Mexico natural gas pipelines, said “perhaps even more so than in the U.S., our business in Mexico is reinforced by strong fundamentals, which point to the need for additional midstream infrastructure.”

Meanwhile, Pembina Pipeline Corp. on Wednesday said it was abandoning plans to build the Jordan Cove liquefied natural gas (LNG) export project and related pipeline in Oregon, citing ongoing regulatory setbacks. This would leave only a handful of potential LNG export projects on the western coast of North America.

One of these, Sempra’s 3.25 million metric ton/year (mmty) Energía Costa Azul, is under construction in Mexico’s Baja California and set to go online in 2024. A proposed second phase would add 12 mmty of liquefaction capacity. There are three other potential liquefaction projects slated for Mexico.

At points key to Mexico trades in South Texas, January futures were down across the board on Wednesday for a third straight day. The Henry Hub January contract closed at $4.278, down 30.9 cents day/day.

Mexico’s Sistrangas five-day line pack average was 6.683 Bcf on Wednesday (Dec. 1), below the optimal line pack of 6.86-7.29 Bcf needed to guarantee sufficient pressure in the system.

Demand on the Sistrangas on Wednesday was 4.686 Bcf, down from 4.709 Bcf a day earlier. Mexico gas production fed into the system was 1.286 Bcf. Southeast production dominated the total, with 730 MMcf/d from the region injected into the pipeline system on Wednesday.

On Thursday, the U.S. Energy Information Administration (EIA) reported a 59 Bcf withdrawal from natural gas storage inventories for the week ending Nov. 26. The print was basically in line with market expectations.

The South Central region saw stocks fall by a net 12 Bcf, including a 3 Bcf decline in salt facilities and an 8 Bcf drop in nonsalts. Until Mexico develops its own storage capability, this is the storage system most readily available to the country.