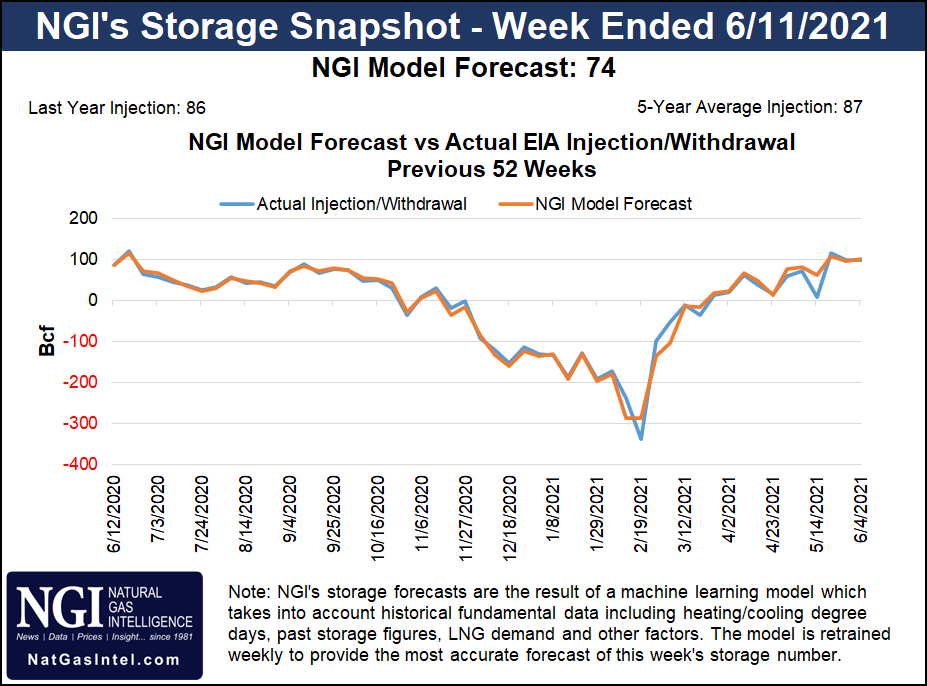 Tetco said a 20% pressure reduction that began this month on part of its 30-inch diameter system could last until late in the third quarter. This developed after Tetco reported an anomaly that was identified during recent inspections.

“We believe the market may still be underestimating the impact of the anomaly discovered on Tetco’s 30-inch pipeline,” analysts at EBW Analytics Group said Monday. EBW is watching to see if “it is found to extend into other segments of the line or takes many more months to repair than the time frame specified in the Tetco notice, as we believe is likely to occur.”

“It may take weeks or even months before the gas market fully recognizes the extent of the impact,” the EBW analysts added.

Meanwhile, hotter-than-normal conditions could persist for the rest of June over parts of the West, Midwest and Southeast, bolstering natural gas demand, while production is holding steady at around 91-92 Bcf/d.

Bespoke Weather Services expects a “hotter overall base state” over the next two weeks.

“Best heat in the near term remains in the western half of the nation, where some records likely fall this week, though as we move closer to the end of the month, some modest above normal temperatures can return to the eastern U.S.,” Bespoke said.

Summer heat permeated the nation’s midsection Monday. High temperatures held firmly in the 90s as far north as the Dakotas, with highs expected to approach 100 on Tuesday in parts of the northern Plains. Highs in the 90s baked Houston, Dallas and other major markets in Texas, too.

The Electric Reliability Council of Texas on Monday issued a conservation alert, asking consumers and businesses to reduce electric use immediately to prevent surging demand from resulting in blackouts.

Scorching triple-digit temps were expected throughout the desert Southwest, as well, with highs around 115 degrees expected in Las Vegas and Phoenix for most of this week.

Additionally, power burns “continue looking stronger in our weather-adjusted model, aided somewhat by a recent spike in nuclear outages,” Bespoke said. “While we would not be surprised at a pullback after such a strong move higher recently…confidence is too low, for now, to say that is more likely than not.”

After dipping below 10 Bcf last week amid maintenance work at export facilities, LNG feed gas volumes hovered above 10 Bcf on Monday. That was not far from the record 11.9 Bcf record reached in April. U.S. export destinations in Asia and Europe — where supplies are light and cooling needs are mounting — are expected to drive robust demand throughout the summer months.

“The freedom of movement of people is scaling up in the U.S. and Europe in particular,” she said.

Dickson called it “a bullish cocktail of rising demand, summer maintenance and a vaccination breakthrough.”

Also of note, Pacific Gas and Electric Co. (PG&E) announced it would adjust how it reports storage inventory to reflect a reclassification of 51,098 MMcf from working gas to cushion gas. The adjustment will affect the storage inventory level PG&E reports to the EIA beginning with the week ended June 18.

This means the EIA storage report covering that period “should show a ‘net change’ number which is 51 Bcf lower than the ‘implied flow’ number for that week,” said Wood Mackenzie analyst Eric McGuire.

The change has the impact of reducing inventory in the winter and withdrawal capacity in the summer, a “potentially bullish” development for high demand periods, McGuire said.

NGI forecast a build of 74 Bcf for the week ended June 11. Bespoke pegged the increase at 72 Bcf.

Those figures compare bullishly to both the year-earlier injection and historic norms. Last year EIA reported an increase of 86 Bcf, while the five-year average is 87 Bcf.

The National Weather Service on Monday issued excessive heat watches and warnings throughout California, southern Nevada, Arizona and Utah. Many of the alerts extend through Friday.

NatGasWeather said both the domestic and European weather models shifted over the weekend to show demand easing “slightly” this week after robust cooling demand last week.

This was attributed largely to “weather systems with showers and comfortable temperatures” across the Great Lakes, Mid-Atlantic and Northeast, the firm said. Highs in those regions are expected to range from the upper 60s to lower 80s this week.

Prices climbed across every region except West Texas, where Waha dropped 29.0 cents to $2.890.

Also of note on the weather front, Tropical Depression Two developed off the coast of North Carolina on Monday. AccuWeather forecasters said the system could strengthen and become the second named storm of the two week-old 2021 Atlantic hurricane season. It would be named Bill.

The depression was about 100 miles east of Cape Hatteras, NC, with maximum sustained winds of 35 mph at midday Monday, the National Hurricane Center said. The system was moving to the northeast and was not expected to threaten the Lower 48. However, it “will churn up seas offshore, which would be a concern” for shipping interests, AccuWeather said.