After a week of only modest changes along the Nymex futures curve, price action on Friday was anything but, as a major natural gas pipeline warned that restrictions it has in place could last through the end of September. The July Nymex gas futures contract started climbing overnight and continued to surge throughout the day, closing the week at $3.296, up 14.7 cents from Thursday’s close. August prices rose 14.5 cents to $3.311. 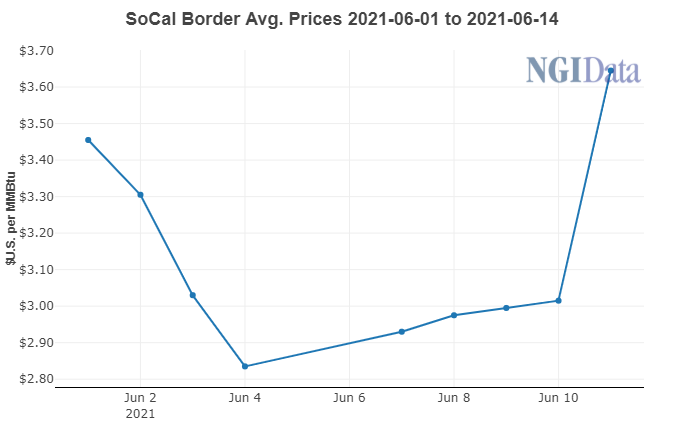 Spot gas action was just as significant. Stout gains across much of the country overshadowed losses in the Northeast amid a return of cool weather. NGI’s Spot Gas National Avg. climbed 16.0 cents to $3.060.

Nymex gas prices had maintained the $3.00 handle for more than a week even as summer heat failed thus far to be sustained across the country for more than a few days. However, market observers said prices would struggle to gain much ground without more hot weather, or some other supportive factor like a recovery in liquefied natural gas (LNG) demand.

In a posting to its electronic bulletin board shortly before 6 p.m. ET Thursday, Tetco said a 20% pressure reduction that began this month on part of its 30-inch diameter system — required by a Pipeline and Hazardous Material Safety Administration (PHMSA) order — could last until late in the third quarter.

The restrictions were put in place after Tetco reported an anomaly that was identified during recent inspections. PHMSA is working to further evaluate the findings of inspections and how they could impact other Line 10 and Line 15 segments along the system.

Tetco said it is continuing to meet regularly with PHMSA and is in the process of conducting an engineering analysis to support a return to service. The pipeline said it “understands the importance of returning its system back to full service as soon as possible, and endeavors to provide a more exact timeframe and potential scope of work by the end of the month.”

In a Friday note to clients, Bespoke Weather Services said as soon as the Tetco news was issued, things went “bonkers in the natural gas market.” Based on market chatter that some of the gas may be rerouted, Bespoke questioned whether the rally was an “overreaction, especially in light of supply/demand balances not being impressive of late.”

The market was shrugging off the looseness, even before the Tetco issues first surfaced, “but it is honestly difficult to have much of an edge here, given that this issue is not clear cut yet,” according to Bespoke.

“Weather remains generally hot,” with some risk of cooler weather for a brief period in the next few days. However, the market is “definitely pricing in a lot of bullish news up here,” Bespoke said. “Obviously, if the Tetco issue winds up less significant than what the market currently expects, we will fall.”

Still, “things hinge on an issue that is difficult to know all about at this time,” according to the firm. “Sometimes it is just best to sit on the sidelines until the smoke clears, and a higher confidence play shows up, which will surely happen at some point here. Until then, it is a market to tread lightly in.”

EBW Analytics Group said while some of the gas may flow via another route, flows from Appalachia to the South could be reduced for months. It is also possible that sections of the pipeline would need to be shut down until the anomaly is corrected. This would further magnify the impact on gas prices, it said.

With the Tetco news dominating the market on Friday, the latest government storage data took a back seat.

Tudor, Pickering, Holt & Co. (TPH) analysts said the Energy Information Administration’s (EIA) 98 Bcf storage injection was not material as it came in near consensus and did little to meaningfully improve balances. The story that is worth watching, according to analysts, is power generation data for the latest week (June 7-11), which is giving an early indication that coal may struggle to substitute for gas.

The analysts were cautious to read too much into a small sample. However, the weak coal generation numbers equate to an incremental 3.5 Bcf/d of power burn. “If this trend continues into summer, it would bring material upside for Henry Hub into $3.50-plus territory,” the TPH team said.

If the share of gas in thermal power generation holds in the 60% range, peak generation in mid-summer should land in the 40 Bcf/d range, which should push total demand north of 96 Bcf/d, according to TPH. With modeled production at 92 Bcf/d and Canadian imports at 4.5 Bcf/d, this could bring the market near its balancing point. That potentially may open the door for a small mid-summer withdrawal.

“Some stars would need to align, but the setup looks to be there for the possibility of the first summer draw since 2016,” the firm said.

“Weather has been slightly bearish over those four weeks, with total degree days actualizing six less than the five-year,” Wood Mackenzie analyst Eric Fell said. “On a weather-adjusted basis, the last four weeks appear very close to normal/neutral relative to the prior five-year.”

Between Monday and Friday (June 7-11), the loss of Gulf Coast LNG feed gas demand of 1.8 Bcf/d week/week and a lack of regional early-season warm anomalies could lead to continued weakening of the regional gas storage deficit, according to EBW.

Prices across the Midcontinent and into the Midwest picked up mostly between 10.0 and 20.0 cents, while gains were smaller farther east. Texas Eastern M-3, Delivery spot gas prices rose 2.5 cents to $2.085.In the Northeast, the approaching cool front sent prices tumbling. Transco Zone 6 non-NY slipped 2.0 cents to $2.045. Iroquois, Waddington posted a much steeper 17.0-cent decline to average $2.920.