Over the weekend, the celebrated groundhog Punxsutawney Phil foreshadowed an early spring, but natural gas traders have spent the past month wondering when winter will start, much less when it will end. 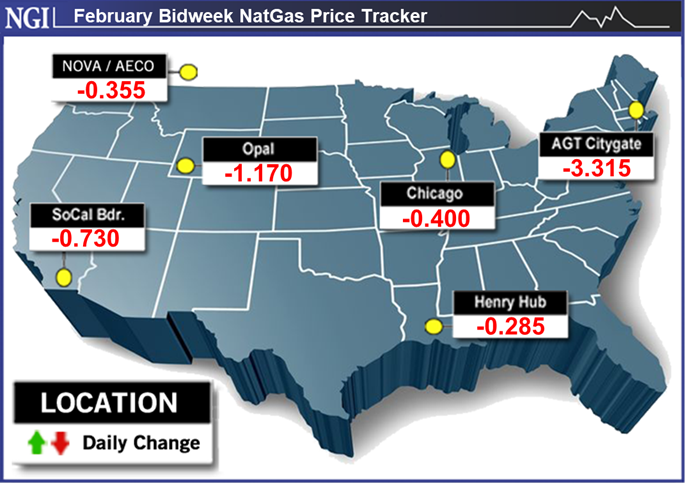 To describe January heating demand as underwhelming would qualify as an understatement, and any lingering winter risk premiums seemed to evaporate with the morning dew in February bidweek trading; deep discounts from coast to coast dropped NGI’s February Bidweek National Avg. 75.5 cents to $1.810/MMBtu.

The near-complete absence of January cold — especially for key demand markets in the Midwest and East — sent natural gas futures plunging below the psychologically and technically significant $2 level.

The February Nymex contract rolled off the board at $1.877 last week; the 28.5-cent month/month decline at benchmark Henry Hub established a bearish baseline that saw fixed-plus-basis averages drop at least a quarter at nearly every trading location in NGI’s bidweek reporting.

The Northeast posted the largest discounts during February bidweek. New England hubs hardly showed any of their characteristic winter volatility in spot trading during the month of January, and February fixed-plus-basis averages plummeted accordingly.

With the market entering the first trading week of February, the path forward for natural gas prices remains clouded in uncertainty. Forecasts heading into Monday’s trading suggested bulls could only hope for near-normal temperatures at best through mid-February.

Looking at the major models, the European dataset moved slightly colder over the weekend as the American shifted warmer, “bringing the two into very good agreement regarding total forecast demand through the middle of the month,” Bespoke Weather Services said. “We do see more ridging at times around Alaska in the medium range…but the lack of any blocking whatsoever from the pole over to Greenland keeps any cold confined to the central/western states, with above normal temperatures persisting in the East.

“This makes it difficult to get national demand any higher than near normal for a few days here and there, and means any weakening of the Alaska ridging would lead the forecast right back warmer.”

Still, balance data as of Monday suggested the market remains “quite tight,” including more than 9.0 Bcf/d of liquefied natural gas (LNG) feed gas demand and power burns that “look healthy” given weak demand and increased wind generation, according to Bespoke.

“If we can progress forward and maintain a near normal demand regime, we feel that would be bullish with this balance, allowing prices to continue advancing higher, but if the pattern again winds up rolling forward warmer, we would be back in a situation where warmth can negate the balance side of the equation,” Bespoke said.

With 4Q2019 earnings season underway, upcoming disclosures from exploration and production companies could significantly shape the market’s expectations for future supply trends, according to analysts at EBW Analytics Group. The firm said pipeline flows suggest production has dropped off by around 2.5-3.0 Bcf/d since November.

“The most important non-weather bullish catalyst over the next month is likely to be producer earnings calls with 2020 production guidance,” the EBW analysts said. “If producers cut back capital expenditures and 2020 production estimates, the grounds may be laid for a sustained rebound in natural gas.”

The weather and storage picture at this point in the season is working against the bulls, however, according to the EBW analysts.

“There are no current signs of sustained colder-than-normal weather during the second half of February or early March. This period is critical,” they said. “Even at last Friday’s prices, storage is currently on a path to end the winter heating season in March well above 1,800 Bcf in a normal weather scenario — making it difficult for the front-month contract to move back above $2.

“We are at the point of the winter, however, when the number of hours of sunshine is increasing rapidly. This reduces the opportunity for cold enough weather to draw down storage significantly. By contrast, the warmside risk remains high, potentially driving prices even lower.”

Energy Aspects recently estimated an end-March carryout of 1.85 Tcf. Considering the mild start to February, even sustained colder-than-normal weather later this month (more than what recent forecasts have shown) might not make much of a dent in the storage cushion, according to the firm’s modeling.

“We ran our models assuming 5% and 10% colder-than-normal weather from Feb. 7 through end-February,” Energy Aspects said. “Under the 10% colder-than-normal scenario, our balances indicate an additional 135 Bcf of residential/commercial, industrial heating and power load demand…With all else being equal, even the overtly bullish 10% scenario would still leave our end-March inventory just above 1.7 Tcf.”

The significant net short position among speculators leaves open the possibility for a “temporary move up” driven by short covering, Energy Aspects said, but “such a large inventory overhang” will likely compel the market to “work some of that down ahead of the start of cooling season.”

Exports should help do at least some of the work of soaking up the excess supply. As of Monday, NGI’s LNG Insight showed total deliveries to U.S. LNG export terminals reaching 9.28 million Dth/d. Volumes have topped the 9 million Dth/d mark each day since Jan. 27.

The recent start of commercial service for Freeport LNG’s Train 2 has been “standalone bullish” for Houston Ship Channel (HSC) prices, according to RBN Energy LLC analyst Jason Ferguson. However, “new Permian supply into the coastal markets of Texas has more than met that rising demand and kept prices under pressure.”

“Back in 2018, HSC basis was trading at a consistent premium to Henry Hub as supply from the nearby Eagle Ford Shale slumped, demand from Mexico was rising and power demand for gas was increasing due to coal plant retirements,” Ferguson wrote in a recent blog. “2018 also pre-dated any of the major interstate pipeline flow reversals from Louisiana and any expansion of intrastate pipeline capacity from the Permian to the Gulf Coast.

“However, in 2019 HSC basis reversed course and began pricing well under Henry Hub…The initial price weakness at HSC was largely driven by a timing mismatch between the pipeline reversals meant to supply the new LNG export terminals in Texas and the actual completion of LNG export capacity there.”

This included a ramp up in flows into the HSC area on the Gulf South Pipeline in the spring of 2019 meant to supply the Freeport terminal, the analyst said.

“While Freeport has since ramped up its LNG export capacity,” Kinder Morgan Inc.’s 2 Bcf/d Gulf Coast Express pipeline has ramped up volumes flowing to the Texas Gulf Coast out of the Permian Basin over the same period, meaning “supply there has continued to outpace demand.”

Elsewhere on the exports front, Genscape Inc. said U.S. pipeline exports to Mexico declined over the weekend, but the firm is looking for volumes to increase later this week.

“Exports fell to as low as 5.14 Bcf/d this weekend and are only up to 5.23 Bcf/d for today,” Genscape senior natural gas analyst Rick Margolin said. “Volumes are low due to the weekend, mild weather and today being Constitution Day, a national banking holiday. The bulk of the drops has been on South Texas pipes, though volumes out of West Texas, Arizona and California are also down.

“The conclusion of” Monday’s holiday “should compel volumes to climb back into the 5.5 Bcf/d range for the rest of the week. Volumes could move higher next week as a warm front moves across the country, potentially generating cooling loads.”

Prices in West Texas came under more pronounced downward pressure as signs of congestion have continued in the producing region early in 2020. Waha tumbled 81.0 cents to average just 28.0 cents in February bidweek.