U.S. natural gas futures facing Mexican buyers and sellers were a roller coaster this week as prices jumped early in the week as October rolled off the board followed by a dive on Wednesday when November took over as the front month. 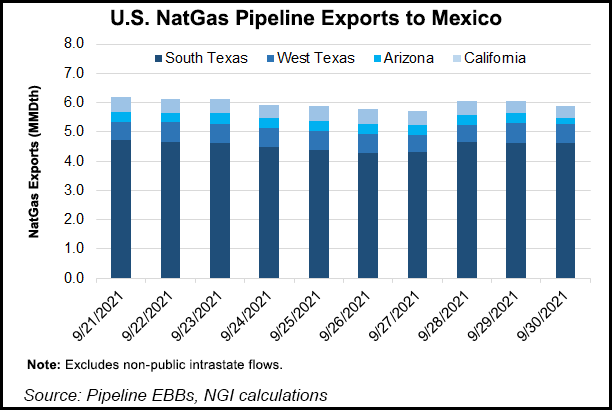 “Markets are very, very nervy,” a Mexico City-based trader told NGI’s Mexico GPI. “We hope nothing extraordinary happens. Because in Mexico no one really has hedges to cover for extraordinary events.”

Analysts at EBW Analytics Group said “technicals and fundamentals indicate bearish momentum is likely to continue” for U.S. prices, which at the main benchmarks have been at or above the $5.00/MMBtu mark over the last month. A recent survey of oil and gas companies by the Federal Reserve Bank of Dallas was also bearish and the consensus was that commodity prices by year’s end would be lower than where they stand today.

This is in contrast to the rest of the world where prices can’t seem to find a ceiling on the back of soaring global demand for natural gas amid tight supplies.

In North Asia, Japan-Korea Marker (JKM) spot prices were assessed at an all-time high of $34.47 on Thursday, nearly $3.00 above Wednesday’s levels, while British and Dutch benchmarks now sit well above $30 and continue to set records.

The higher prices in Mexico were also having ripple effects across the economy. On Thursday, Mexico’s Central Bank raised interest rates for the third straight meeting, to 4.75%, citing inflation worries including higher energy and food prices. Officials now see Mexico inflation hitting 6.2% in the fourth quarter from a previous estimate of 5.7%.

A trader for a natural gas generator in Mexico City said power prices after initially lagging were also now reflecting the cost of natural gas.

Gas imports from the United States are also dipping, as is typical for the shoulder season in Mexico. Flows into Mexico were 5.87 Bcf on Thursday and the 10-day average was 5.97 Bcf/d, according to NGI calculations.

Mexico’s Sistrangas five-day line pack average was 6.812 Bcf/d on Wednesday, just below the optimal line pack of 6.86-7.29 Bcf needed to guarantee sufficient pressure in the system.

Demand on the Sistrangas on Wednesday (Sept. 29) was 4.377 Bcf, basically flat compared with 4.385 Bcf a week earlier. Mexico gas production fed into the Sistrangas rose week/week to 1.427 Bcf on Wednesday from 1.368 Bcf. The processing centers at Nuevo Pemex (450 MMcf), Burgos (302 MMcf) and Cactus (354 MMcf) were all up on the week and were the leading injection points.

On Thursday, the U.S. Energy Information Administration (EIA) reported an injection of 88 Bcf into natural gas storage for the week ended Sept. 17, slightly above market expectations.

The South Central saw a storage increase of 23 Bcf, including a 12 Bcf injection into nonsalt facilities and an 11 Bcf build in salts.