Solid growth continued across some of the biggest oil and natural gas production regions in the country during the third quarter, but supply costs are rising and executives are a bit more wary than earlier this year, the Federal Reserve Bank of Dallas said Wednesday. 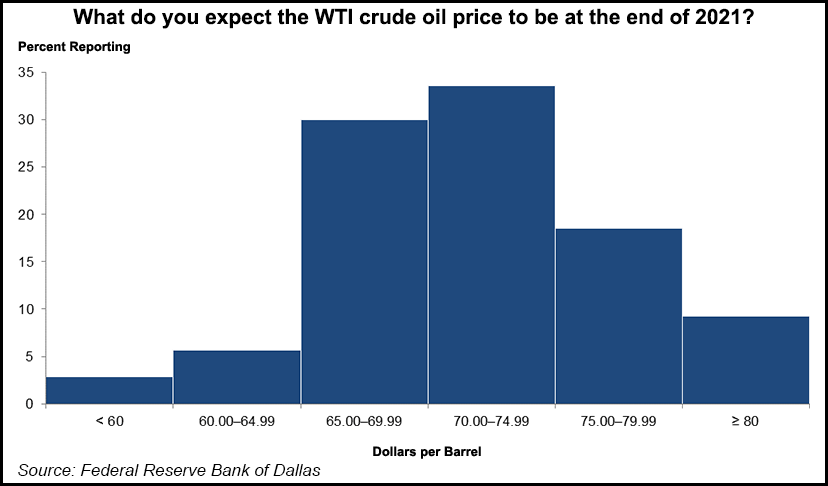 The Dallas Fed, as it is known, collected data across the Eleventh District from Sept. 15-23 from 95 exploration and production (E&P) companies and 47 oilfield services (OFS) firms in the state of Texas, 26 parishes in Northern Louisiana and 18 counties in southern New Mexico. Those states include the Permian Basin, as well as the Eagle Ford and Haynesville shales.

The outlook for commodity prices by year’s end is lower than where oil and natural gas prices stand today, executives said.

Henry Hub prices are forecast to average $4.74/Mcf at year’s end, the executives predicted. For reference, Henry averaged $5.22 during the survey collection period.

West Texas Intermediate (WTI) oil prices are expected to average $70/bbl at the end of 2021, with responses ranging from $42 to $90. For reference, WTI averaged $72 when the survey was taken.

The business activity index, the survey’s “broadest measure of conditions” facing the energy sector, “remained elevated,” economists said. However, the index moved down to 44.3 from 53 in 2Q2021.

For a second quarter in a row, costs were up sharply, the respondents said.

Among OFS firms, the input costs index “increased to 60.8, a record high and indicative of significant cost pressures.”

Only one of 47 OFS firms responding to the survey reported lower input costs during 3Q2021.

One OFS executive in responding to the survey said the business provides seismic data to E&P clients, “or at least it used to be.

“We are increasingly seeing new customers who are interested in using seismic data to assist them in carbon-capture use and storage projects. It appears that regulatory bottlenecks and/or delays are slowing the potential for many of these carbon-capture projects.”

E&P firms also are reported to have higher sequential costs. Finding and development costs advanced to 33 in 3Q2021 from 28.3. Additionally, the index for lease operating expenses increased to 29.4 from 23.4.

“It is also taking longer for companies to receive inputs,” economists said. Among the OFS firms surveyed, the supplier delivery time index increased sequentially to 26.7 from 14.0, “the highest reading since the survey’s inception in 2016.”

“The index measuring delays in deliveries increased to 26.7, also a record high. Similarly, among E&P firms, the index for supplier delivery time increased from 4.0 to 10.5.”

“Operating margins continued to widen, with the index remaining positive at 21.8,” according to economists. “The index of prices received for services rose from 30.0 to 42.2.”

The employment index in the third quarter stood at 25.5 for OFS operators, compared to 8.4 for E&P firms. The aggregate employee hours index also “remained positive,” but it dipped to 19 from 24. The aggregate wages and benefits index increased to 30.3 from 20.6.

“Six-month outlooks improved, with the index remaining positive,” economists said. However, it declined to 58.9 from 71.9 in 2Q2021. “After two quarters of declining uncertainty, the uncertainty index moved up from minus 19.6 to 4.3, suggesting a slight rise in uncertainty this quarter.”

Each quarter, the Dallas Fed asks special questions of the E&P and OFS firms. For the latest survey, economists were looking for insight from executives about U.S. electric vehicle (EV) sales, carbon credits and/or carbon offsets, as well as Covid-19-related operational delays and hiring challenges.

OFS executives were queried about whether they were having issues hiring people. More than half (51%) “said they had difficulty hiring workers over the past quarter.” However, around one-quarter had no issues, while 24% did not post any job openings.

Said one E&P executive, “In order to pursue the climate goals of the U.S., we must incorporate traditional energy producers and industrial firms in the conversation…If you desire to have an impact on carbon, you can catch more flies with honey than vinegar. There is no amount of electrification (or carbon taxation) that will create plastics, cement or fertilizer.”

The executive said it was time for tax incentives, like the 45Q, which provides credits for carbon dioxide sequestration, “to be expanded and extended.”