This week saw an ebbing in the price surges of the past month, but Mexican buyers of natural gas are gearing up for a potentially precarious winter season. 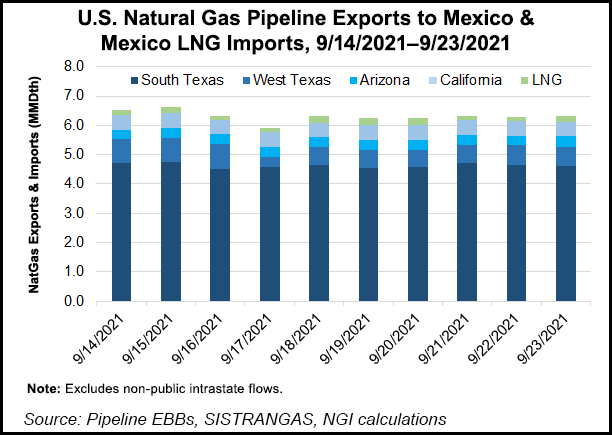 “This winter is gonna be very different from previous years for sure, as we haven’t had this tight of a market in a very long time,” Refinitiv analyst Shuya Li said Thursday on The Desk’s online energy platform Enelyst. “The prompt prices have come down a bit from the record highs as we head into the shoulder season. But winter risks didn’t go away.”

Gadex consultant Eduardo Prud’homme said market conditions in Mexico are stable at the moment, but there is concern about what the winter might hold in store.

In a webinar Tuesday hosted by Refinitiv and NGI, a panel of experts said numerous factors, including supply that isn’t reacting to price signals as in previous surges, have converged to create a far tighter market than what is normally seen at this time of year.

“I traded 25 years…and we are coming into a winter that has the most upside bullish tail risk for prices that I’ve seen in all my years in the space,” said NGI’s David Dutch, vice president of business development.

Some hubs that are key to Mexico gas supply are expecting massive year/year jumps. The winter strip pricing at the Waha hub in West Texas, for example, is more than double what it was at this time last year.

Meanwhile, on the positive side, a gas buyer said Mexico is also in the advantageous position of importing via pipeline and isn’t facing the $20/MMBtu-plus that liquified natural gas (LNG) importers are dealing with in European and Asian markets.

CFEi is the international marketing arm of Mexico’s state-owned power company Comisión Federal de Electricidad (CFE). During 2Q2021, it was the ninth largest marketer of gas in the North American market.

Mexico gas imports have also slowed marginally now that the hottest months are over, but are still robust.  According to NGI calculations, the 10-day average of gas imports from the United States was 6.31 Bcf/d through Thursday.

Beyond the freakish prices recorded during the Texas freeze in February, they were for the second consecutive month the highest on record since the IPGN was launched in 2017.

Natural gas volumes transacted by marketers that reported to CRE rose to 7.381 Bcf/d in August, from 7.194 Bcf/d in August 2020. The figures mad August the busiest month of the year in terms of Mexico natural gas transactions.

The CRE used 335 transactions from information provided by 31 marketers to calculate the August index. The industrial Northeast reported the highest volume of transactions at 2.179 Bcf/d, followed by the gas region encompassing Mexico City, which saw transactions of 1.982 Bcf/d.

Mexico’s Sistrangas five-day line pack average was 6.674 Bcf/d on Wednesday, again below the optimal line pack of 6.86-7.29 Bcf needed to guarantee sufficient pressure in the system.

Demand on the Sistrangas on Wednesday (Sept. 22) was 4.385 Bcf, basically flat compared with 4.392 Bcf a week earlier. Mexico gas production fed into the Sistrangas fell week/week to 1.368 Bcf on Wednesday from 1.412 Bcf. The processing centers at Nuevo Pemex (447 MMcf), Burgos (297 MMcf) and Cactus (306 MMcf) were the leading injection points.

At points key to Mexico trades, futures prices fell back this week through Wednesday. The Henry Hub October contract closed at $4.810 on Wednesday, flat day/day. Agua Dulce was down by 2.3 cents at $4.835, while Waha slipped 1.5 cents to close at $4.502.

Houston Ship Channel prices for October settled at $4.802, down 2.2 cents.

On Thursday, the U.S. Energy Information Administration (EIA) reported an injection of 76 Bcf into natural gas storage for the week ended Sept. 17, on par with market expectations.

The South Central saw a storage increase of 25 Bcf, including a 14 Bcf injection into nonsalt facilities and an 11 Bcf build in salts.

Total working gas in the South Central region stood at 990 Bcf for the reporting period, down from 1,282 Bcf for the same time one year ago. The figure was also 85 Bcf lower than the average 1,064 Bcf in storage for the same day between 2017-2021, EIA said.