Colder than normal temperatures could trigger extreme upside volatility for natural gas prices this winter, according to industry experts. 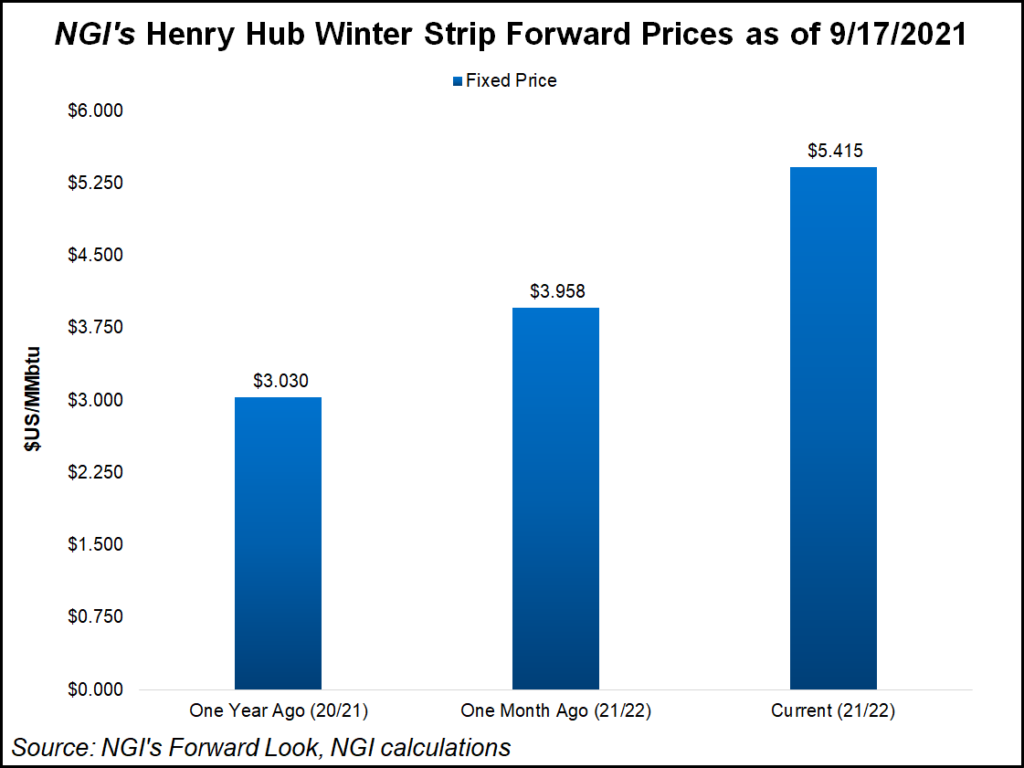 In a webinar Tuesday hosted by Refinitiv and NGI, a panel of experts said numerous factors have converged to create a far tighter market than what is normally seen at this time of year.

“I traded 25 years…and we are coming into a winter that has the most upside bullish tail risk for prices that I’ve seen in all my years in the space,” said NGI’s David Dutch, vice president of business development, when discussing the current state of the gas markets.

Dutch shared the virtual stage with NGI’s price and markets editor Leticia Gonzales, who agreed that “this is not looking like it’s going to be a normal winter.”

Gonzales highlighted that NGI’s Forward Look winter strip Henry Hub prices stood at $5.415/MMBtu as of Sept. 17, up from $3.030 at the same point last year – and that’s just the beginning.

Forward prices at Algonquin Citygate, the benchmark for gas consumed in the Northeast, stood at $18.792 for January and $18.030 for February as of Tuesday (Sept. 21).  “That’s an incredible number already at this time of year,” Dutch said.

The Northeast is not alone. Gonzales noted that winter strip pricing at the Waha hub in West Texas is more than double what it was at this time last year.

Conditions are similarly tight in the Midwest, said Refinitiv’s Shuya Li, a fellow panelist, who is senior analyst for natural gas research.

For starters, North America is coming off a summer that saw stronger-than-anticipated cooling demand. In addition, upstream capital discipline by the exploration and production sector, surging demand for liquefied natural gas (LNG) and pipeline exports, and extreme drought in the West all have contributed to a price rally and storage deficit heading into the fall shoulder season.

Gonzales explained that winter gas at Algonquin Citygate has already been priced at levels approaching parity with European and Asian benchmarks, since New England typically must import LNG when temperatures drop.

So if cold weather hits New England, “and you’ve got those pipeline constraints that are already occurring…then you’re going to see even higher prices play out in this region,” Gonzales said.

One market in particular, California, has been ravaged by drought and historically low water levels at the Lake Mead reservoir, limiting hydroelectric output in the region.

With Dutch Title Transfer Facility (TTF) and UK National Balancing Point (NBP) prices at record high levels and European storage levels well below historical averages, U.S. LNG “most likely stays in the money to these markets all winter unless it really gets cold here and we’ve got to price out,” he said.

Adding to the market tightness is a reduced ability for other thermal energy sources such as coal and nuclear to absorb power demand in a high price scenario, Li said. She noted that a lot of coal and nuclear capacity has been retired or will be soon.

Dutch agreed, saying that “we cannot count on gas to coal switching like we used to be able to in other years.”

Renewable energy has compensated somewhat, Dutch said, “but the sun’s got to shine and the wind’s got to blow…so that’s a tough one to count on.”

Another bullish signal, Dutch said, is that “both the Henry Hub and almost all of our basis winter curves are in backwardation to the outgoing winters. When you go backwardated like that, it’s an extremely bullish signal that people are very nervous about prices in the coming winter.”

Dutch said the only significant bearish factor on the horizon for prices is the prospect of replenishing storage levels somewhat during the fall shoulder season. The two things “that can really sink the winter” are increased production of natural gas and above average winter temperatures, he said.

The biggest wild card, though, will be weather.

“When it gets cold, the upside volatility is going to completely explode,” Dutch said. He cited that two months ago, a majority of natural gas traders were set up in long positions, but now the split between long and short is closer to 50/50.

“That tells you that a lot of traders have already taken profit, and a whole lot of people don’t know what to do with this market this high going into the shoulder season before winter.”