Natural gas pipeline capacity into the South Central region, the epicenter of anticipated demand growth from exports to Mexico and via liquefied natural gas (LNG) terminals, is expected to climb to 19 Bcf/d by the end of the year, according to the Energy Information Administration (EIA). 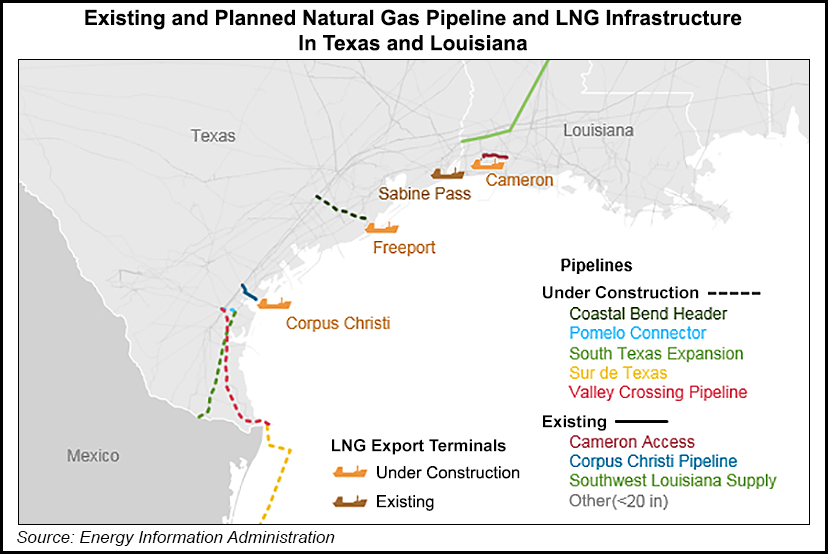 EIA in a recent note said of the 6.4 Bcf/d of Northeast takeaway capacity expected online this year, more than 2.8 Bcf/d extends into the South Central, a region that includes the big producing states of Texas, Oklahoma and Louisiana, as well as Alabama, Arkansas, Kansas and Mississippi.

Recent or imminent expansions into the South Central include the Rayne XPress, Gulf XPress and Atlantic Sunrise projects. Also included is Natural Gas Pipeline of America’s Gulf Coast Southbound Phase 1 expansion to deliver about 0.46 Bcf/d from Illinois into South Texas and Louisiana to supply Cheniere Energy Inc.’s Corpus Christi LNG terminal and pipeline exports to Mexico, according to EIA.

The South Central region’s transformation from a supply region “to a source of growing demand” is a transformation, said EIA, that is “reversing the historical flows of natural gas in the Lower 48 states” as new pipelines crossing the border into Mexico and new LNG export capacity along the Gulf Coast pull gas down into Texas and Louisiana.

“The LNG export facilities scheduled to come online in 2018 and 2019 represent an additional 6.1 Bcf/d of LNG export capacity, requiring infrastructure to connect them to the interstate pipeline network and deliver large volumes of natural gas to the liquefaction terminals,” EIA said.

Four LNG export facilities are under construction, including three in Texas and Louisiana that each have associated pipeline expansions:

Meanwhile, EIA said it expects gas exports to Mexico via pipeline to increase this year as several projects are completed, including the 2.6 Bcf/d Valley Crossing Pipeline, Texas Eastern Transmission Co.’s South Texas Expansion Project and Pomelo Connector LLC’s Pomelo Connector Pipeline. On the Mexican side of the border is the Sur de Texas pipeline, EIA said.

LNG pioneer Cheniere continues to make progress on export-related projects at FERC, with affiliate Midship Pipeline Co. LLC receiving a certificate this week for its Anadarko Basin-to-Gulf Coast expansion. Cheniere has also applied for authorization to introduce feedgas to Train 1 at is Corpus Christi terminal.

Citing rising Lower 48 dry gas production from both gas- and crude-focused basins, analysts have been predicting widespread negative basis differentials as producers compete to move their gas into the premium Gulf Coast market where demand-growth is expected to be concentrated.

Last year, RBN Energy LLC’s Rusty Braziel predicted a scenario where “there’s simply not enough pipeline capacity” to move all the supply to the Gulf Coast, “which is going to show up as widening basis for all the points outside the Gulf Coast region. Bottom line: We haven’t seen the last of natural gas price basis problems across most of the country, at least for the next couple of years.”

East Daley Capital Advisors President Jim Simpson recently offered a similar prognosis, describing a “Southeast/Gulf box” as one of the few premium markets in the country and the focal point of new demand growth.

“Northeast producers get into this box first,” Simpson said during a conference in June. “They win. Now I’ve got a period in time here, before the Permian expansions open up, where I’ve got to push a little over 1 Bcf/d back into the Midcontinent and into this market” outside of the Southeast/Gulf. “So at this point, it doesn’t bode particularly well for basis markets outside that box…so we’ll continue to see fairly weak basis for much of the country for quite some time to come.”