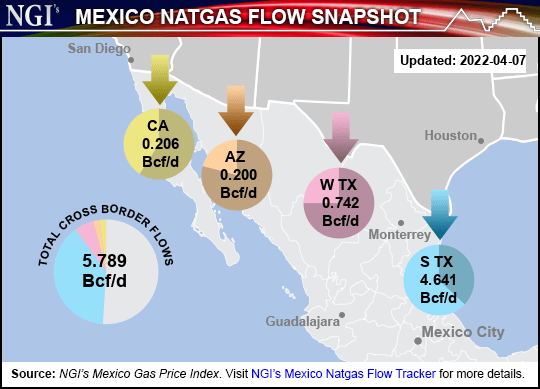 After significant gains on Monday and Tuesday, the May New York Mercantile Exchange futures contract settled at $6.029 on Wednesday, off three-tenths of a cent from Tuesday’s close. June was basically unchanged at $6.107.

That’s three straight weeks of powerful momentum for U.S. natural gas prices, and analysts don’t see a slowdown. Until there is clear evidence of increasing U.S. production growth, “bounds on the upside are somewhat unconstrained without Mother Nature stepping in and providing relief for market participants with short interest,” Mobius Risk Group said.

U.S. supply is seen as sluggish even in the Permian Basin, a key supply point for Mexico natural gas. The analyst team at Tudor, Pickering, Holt & Co. (TPH) noted that while the Permian Basin recently reached highs near 15 Bcf/d, overall supply has been constrained relative to its expectations for this time of the year.

As the Lower 48 gas producers stick to capital discipline, European imports of U.S. liquefied natural gas (LNG) continued at record levels. Mexico, meanwhile, is switching over to its stronger demand months, with April seeing an uptick in U.S. pipeline imports.

“Gas burns for power generation are a main driver for incremental volumes, signaling the fundamental shift that typically comes at the start of the summer,” Falcón said. He added that Mexican dry gas output production remains strong, and is at an April-to-date average of nearly 2.9 Bcf/d.

This is “giving way to some gas-to-gas competition on the supply side.” But, “it is not clear how sustained these levels will be during this season,” he added.

Data released on Thursday showed inflation in Mexico clocking in at 7.45% during 1Q2022, the highest level for this period in two decades. Fuel prices led those gains, according to national statistics institute INEGI.

The lack of permits for private sector firms to both import fuels, and for storage, has exacerbated pricing and energy security worries, according to one energy sector professional.

Mexico’s Supreme Court was set to rule soon on the legality of amendments to the Electricity Industry Law (LIE) approved in congress last year. Discussions on the topic among the 11 justices began earlier this week.

The LIE seeks to give state power company Comisión Federal de Electricidad (CFE) priority over competitors in the nation’s power dispatch. If approved, the LIE would likely impact natural gas demand, as more fuel oil would be used in the nation’s generation mix, according to market participants.

Mexicans also go to the polls this weekend to vote on whether President Andrés Manuel López Obrador should continue his term. The vote is expected to see low turnout with an “active mobilization of voters by the administration and the ruling Morena party, according to Eurasia Group analysts. They said the vote would likely result “in an overwhelming yet inconsequential win” for the president.

The recall referendum was the president’s idea. López Obardor’s approval rating remains strong at around 57%. Meanwhile, any “fears that López Obrador might use the referendum to stay in power after his term ends in 2024 are unfounded. The president has clearly and repeatedly stated that he will not attempt this,” the analysts said.

Mexico’s Sistrangas five-day line pack average was once again low this week, hitting 6.381 Bcf on Wednesday (April 6). This is below the optimal line pack of 6.86-7.29 Bcf needed to guarantee sufficient pressure in the system. System operator Cenagas has advised users to maintain injections and withdrawals to their contractual quantities or risk facing penalties.

Southeast production dominated the total, with 703 MMcf from the region injected into the pipeline system, down 11 MMcf from the previous week.

The South Central region saw a pull of 8 Bcf, which was split evenly between nonsalt and salt facilities. Until Mexico develops storage capability, this is the storage system most readily available to the country.

For the week ending April 1, total working gas in the South Central region stood at 589 Bcf, down from 765 Bcf for the same time one year ago. The figure was also 150 Bcf lower than the average 739 Bcf in storage for the same day between 2018-2022, EIA said.