Wrapping up one of the warmest Novembers in U.S. history, natural gas winter forward prices plunged during the Nov. 25-Dec. 2 period as the weather outlook for December grew milder, according to NGI’s Forward Look. 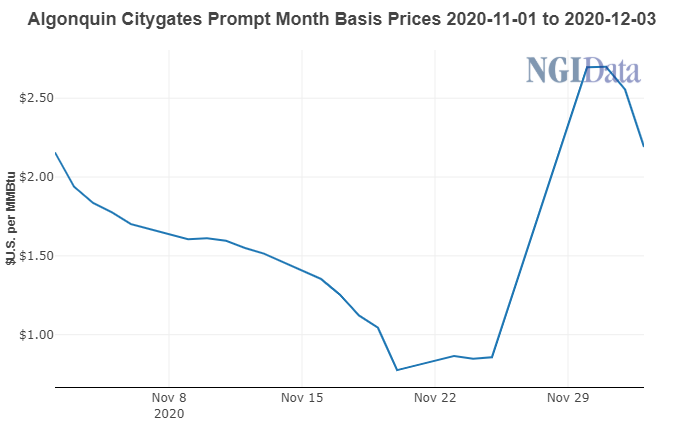 January prices averaged 18.0 cents lower over the period, which included the extended Thanksgiving holiday, while the balance of winter (January-March) tumbled an average 16.0 cents. Losses extended through the rest of the curve but were less pronounced, with the summer 2021 strip (April-October) falling 6.0 cents on average and the winter 2021-2022 sliding 7.0 cents on average, Forward Look data showed.

At the heart of the retreat is an increasingly warm outlook for December. The coming two-week span is generally forecast for moderate temperatures across much of the country. There were hopes of a mid-month cold front, however, Wednesday’s weather models lessened those chances and subsequent runs deteriorated the outlook even further.

Even with other more supportive factors weighing on the market, the balmy turn in the December outlook quickly sent futures prices crashing. The January Nymex settled Wednesday at $2.780, off 10 cents day/day and off 18 cents from Nov. 25. The balance of winter dropped 16 cents to $2.76 over the seven-day period, while the summer 2021 strip dropped 6 cents to $2.73 and the winter 2021-2022 fell 6 cents to $2.98.

“…We truly feel a lot of this price action is simply length exiting, and these folks are likely de-risking for the balance of 2020 given time of year and not wanting to risk more losses at the very end of a year,” Bespoke Weather Services chief meteorologist Brian Lovern said on Wednesday.

That makes it tough for prices to rally, as the control winds up more with momentum trading. A fair price prior to Wednesday’s midday weather model runs was “easily $3.00,” according to Lovern, but the market could never get there.

“This may be something we have to fight until the holidays, even if we get supportive data,” he said.

That fight got a little tougher on Thursday when the Energy Information Administration (EIA) reported a measly 1 Bcf withdrawal from storage inventories for the week ending Nov. 27, which was more than 10 Bcf lower than consensus.

The reference period included the Thanksgiving holiday, which always makes estimating the storage change a bit more difficult. But it also factored in millions of people staying home for the holidays and strong global gas demand in key U.S. export markets. Feed gas deliveries to U.S. liquefied natural gas (LNG) terminals have been rampant over the past month, coming in well above 10 Bcf/d.

Balance wise, Lovern said the EIA’s 1 Bcf draw is “very weak, even factoring in the holiday.”

Participants on The Desk’s online chat Enelyst noted the EIA figure indicates the market is nowhere close to tight. This has become increasingly evident in recent weeks, with back-to-back injections reported in November after an early withdrawal in the final full week of October.

Ahead of Thursday’s EIA report, consensus had built around a draw in the mid- to high teens Bcf range. The EIA’s 1 Bcf draw compares with a 22 Bcf pull last year and the five-year 41 Bcf average draw.

Market observers were looking to the next EIA report to determine whether there is any “proof in the pudding” as far as how supply/demand are stacking up against each other. Bespoke has seen improvements in the data over the past week, suggesting that future EIA stats may be back tighter.

Nevertheless, Thursday’s price action along the Nymex strip proved to be a bloodbath. After Wednesday’s warmer turn in the weather models, Thursday’s further bearish changes swiped the floor from underneath prices.

The January Nymex futures contract was trading about 25 cents lower even before the EIA storage report was released. The prompt month plunged to an intraday low of $2.484 and took the rest of the winter months along with it.

The summer strip also was sharply lower, with traders appearing to either write off winter completely or at least price in the possibility of winter withdrawals coming in lower than normal. One Enelyst participant also pointed out that many market players had been expecting U.S. dry gas production to exit 2020 at around 83-85 Bcf/d. On Friday, output was around 89-90 Bcf. “That is huge.”

The EIA in the latest Short-Term Energy Outlook said it projected dry gas production to decline to 87.0 Bcf/d by April 2021 before “increasing slightly” from there. That would represent a decline of 10 Bcf/d from monthly average production of 97.0 Bcf/d recorded for December 2019. The agency expects dry gas production to average 87.9 Bcf/d in 2021.

The January Nymex futures contract went on to settle Thursday at $2.507, down 27.3 cents from Wednesday’s close, but then gained back some of the losses to close out the week at $2.575.

While weather may not be cooperating on the home front, weather models are painting a slightly more positive picture overseas.

DTN-Frontier Weather meteorologist Steve Strum said Western Europe is expected to see some “modest cold” anomalies the next couple of weeks, but most areas should average fairly close to average. There also may be decent shots of snow in the northern parts of the country in the near term as well.

Eastern Asia also is expected to experience some modest cold anomalies the next couple of weeks, but most areas will likely average fairly close to average, according to DTN. The December outlook favors some cold across central and eastern China, but warmer weather across northeastern China and eastern Russia. More warmth is forecast across eastern Asia during January and February, though the forecaster expects a couple of weeks of widespread cold may occur at some point during January or February across eastern Asia.

Gas prices in Asia and Europe have been on a tear in recent weeks, closing at or near their highest levels since the pandemic began amid a drawdown in storage inventories and supply disruptions in Australia and Qatar. Given Thursday’s dramatic tumble, whether overdone or not, U.S. LNG export economics look even better for this winter and summer, even with current spot charter rates around $110,000/day, according to Shah. “Shipping costs to Asia at those rates are $2.25/MMBtu and to South America or Europe, it’s about $1.25/MMBtu.”

Tudor, Pickering, Holt & Co. analysts agreed that while it’s been a rough ride for Henry Hub this week, global balances have shown considerable tightening with positive implications for U.S. LNG utilization through next September if this keeps up. Over the past week, European storage has drawn by 114 Bcf versus seasonal norms of 82 Bcf, according to TPH, and inventories now sit 222 Bcf below year-ago levels.

“Our end of March forecast has European storage only 106 Bcf below 2020 levels, suggesting there is considerable potential upside to end-of-season balances, freeing up space for more U.S. LNG over the injection season and resulting in fewer cargo cancellations,” TPH analysts said. “However, widening (or even maintaining) the spread versus 2020 is about to get a lot more challenging.”

The firm pointed out that Russian imports are currently running at 17.5 Bcf/d versus January levels of 12.9 Bcf/d and a 1Q2020 average of 14 Bcf/d. “This demand will need to see a year/year increase of around 3.5 Bcf/d just to keep pace with last year’s draw profile. This is not an impossible ask, as last year’s first quarter weather was roughly 3 Bcf/d below norms.”

The possibility of the winter season’s first bomb cyclone this weekend did little to deter bears looking to sink forward prices across New England.

The losses in the region nearly doubled those seen elsewhere in the Northeast, as flows through Algonquin Gas Transmission’s Weymouth, MA, compressor station were set to resume on Friday, according to Genscape Inc.

The Pipeline and Hazardous Materials Safety Administration recently gave approval to resume service at the compressor, which was originally brought into service on Oct. 1 as part of the Atlantic Bridge infrastructure expansion that would allow increased flows toward the Maritimes & Northeast Pipeline.

Meanwhile, after one blast of cold air exited the Northeast, another was hot on its tail and set to hit the region this weekend. AccuWeather said although the storm’s exact path is unclear, where it tracks would determine whether it becomes the season’s first nor’easter. Forecasters will also be monitoring the potential for this storm to go through the process of bombogenesis, or a rapid strengthening that occurs when the central barometric pressure of a storm plummets by 0.71 of an inch of mercury within 24 hours. This level of intensification is referred to as a bomb cyclone.

“If that type of significant strengthening takes place, the storm could bring high winds and extensive power outages throughout the Appalachians and Atlantic coast with widespread flooding rain along the coast and very heavy snowfall across the interior of the Northeast,” said AccuWeather meteorologist Maura Kelly.

The weather system could unleash widespread impacts across the Northeast even if it doesn’t intensify enough to be classified as a bomb cyclone as it tracks along the Eastern Seaboard. Cold air drawn into the storm’s circulation could mean “heavy, wet snow,” particularly in the higher terrain from western Massachusetts up into interior Maine, according to AccuWeather. The heaviest snow is expected to fall across northern New England, where 6-12 inches is likely. Snowfall totals can even reach above a foot in northern Vermont, New Hampshire and western Maine.