The Energy Information Administration (EIA) reported a 76 Bcf injection into natural gas storage inventories for the week ending Sept. 25, a figure that offered no surprises to the market but initially knocked prices down a couple of notches. 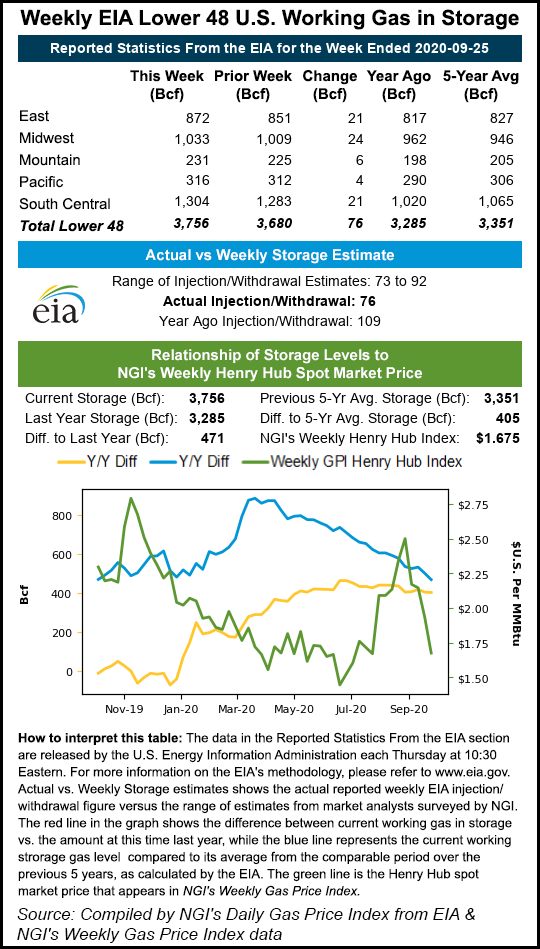 The November Nymex gas futures contract was trading about 5.5 cents lower in the minutes leading up to the EIA’s 10:30 a.m. ET report and dropped another 1.6 cents to $2.455/MMBtu as the print hit the screen. By 11 a.m., the market settled and the prompt month moved back up to $2.487, which was still off 4.0 cents from Wednesday’s close.

The Wall Street Journal survey estimates were 73-92 Bcf, with an average of 80 Bcf. NGI estimated an injection of 80 Bcf.

EIA recorded a 109 Bcf injection for the comparable week last year, and the five-year average is a build of 78 Bcf.

Despite the hefty build, the figure is reflective of some of the tightest supply/demand balances seen this summer, according to some analysts. However, with storage at record levels, it is not enough yet to avoid containment issues, said Bespoke Weather Services. This is true in the South Central region, which is most important to Henry Hub pricing.

South Central inventories rose by 21 Bcf, including a 9 Bcf injection into salt facilities and an 11 Bcf build in nonsalts, according to EIA. Salt capacity is reported to be around 400 Bcf, with four more weeks remaining in the traditional injection season. Builds often continue into November.

The balance of the injection season is expected to be all about storage containment. Genscape Inc. senior natural gas analyst Eric Fell said for the next month, spot prices may be prone to wild swings based on weather forecasts, production and how long the ongoing liquefied natural gas (LNG) terminal outages last. Cameron LNG remains offline following Hurricane Laura, while Cove Point is shut down for planned maintenance.

Genscape continues to expect a significant ramp-up in LNG feed gas deliveries in October, with nominations to Cameron now at 0.1 Bcf/d after being at zero for most of September. It also expects the return of Cove Point, while nominations to Elba and Freeport have hit new all-time highs in the last two days.

Going forward, demand is expected to be hypersensitive to gas prices, according to Fell, “but weather is the 800-pound gorilla in the winter.” Genscape is currently projecting end-of-October storage inventories to reach 3.96 Tcf.