Fueled by a large decline in production, intense heat and a return to strong exports, the Energy Information Administration (EIA) reported a modest 16 Bcf injection into storage inventories for the week ending July 2. 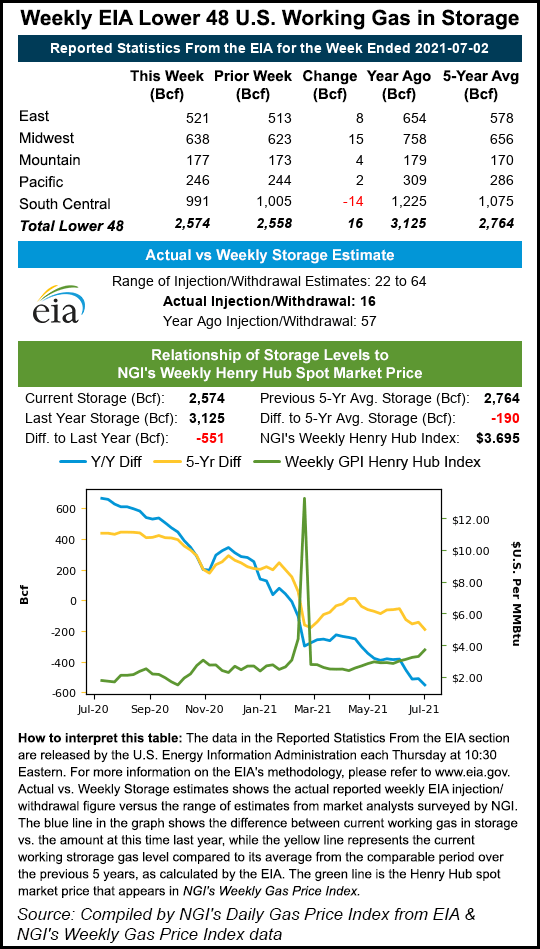 The figure came in below the lowest of expectations, sending Nymex natural gas futures screaming higher. The August Nymex contract was off early in Thursday’s session, in line with global commodity trends, trading at around $3.62/MMBtu in the minutes leading up to the report. After the print crossed trading desks, the prompt month shot up to around $3.670 and by 11 a.m. ET was at around $3.660, up about 7.0 cents from Wednesday’s close.

“Was the past four sessions a break? I don’t know. Maybe, maybe not,” Sharp said. “It’s going to be a grind to the end-of-season number.”

Last year, the EIA recorded a 57 Bcf injection and the five-year average stands at 63 Bcf.

The reference week included record heat in the Pacific Northwest, as well as hot weather on the East Coast. Meanwhile, after weeks of maintenance, liquefied natural gas feed gas demand soared back above 11 Bcf on several days. Production also was lower in both the Northeast and the South Central region.

Broken down by region, the South Central stunned market observers with a rare withdrawal in both salt and nonsalt facilities, declining by a net 14 Bcf in the reference week.

Enelyst participants noted that the draw wasn’t because of heat in Texas. Instead, the reduced production combined with low wind generation likely led to the surprise draw. Enelyst managing director Het Shah said wind is “really messing with the power stack. The same level of coal isn’t there anymore to react when prices move higher.”

Elsewhere, the Midwest reported a 15 Bcf injection into storage, according to EIA. The East added 8 Bcf, and the Mountain region added 4 Bcf. Pacific inventories rose by 2 Bcf.