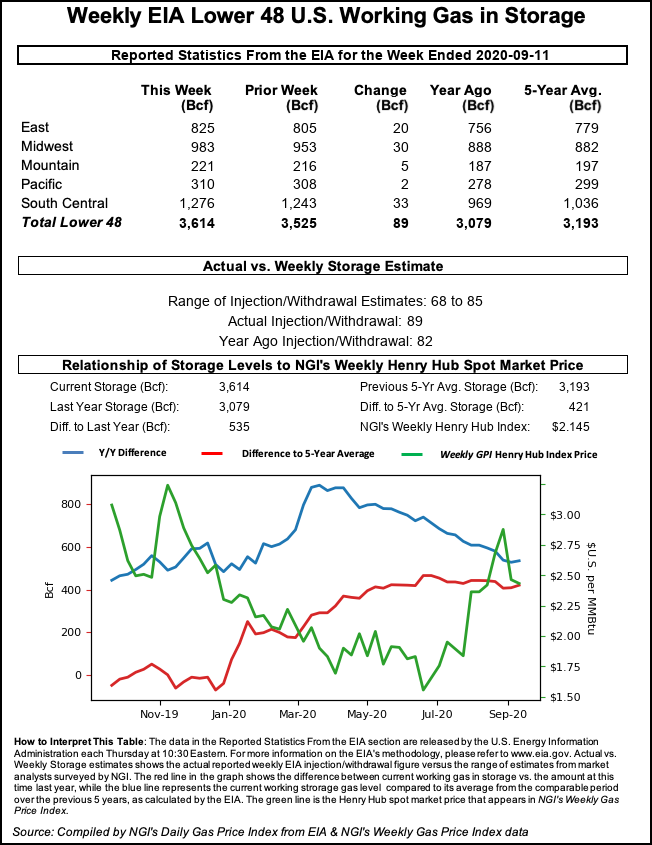 The losses occurred as Hurricane Sally’s destruction imposes uncertainty, and the full impacts of other demand drivers this fall also remain unclear.

The prompt month has not dipped below $2.000 since early August, with markets rallying since then as economies reopened and energy demand showed signs of momentum. However, Robert Yawger, director of energy futures at Mizuho Securities USA LLC, said supply/demand fundamentals did not support the revival and much of the trading was overly speculative. Brimming storage levels in September punctuate this, he said.

“Nobody should be surprised the natural gas bubble has burst,” Yawger said.

Spot gas prices dropped across the country as well on Thursday, with NGI’s Spot Gas National Avg. down 24.0 cents to $1.595.

“So much for the bulls,” said a participant on The Desk’s online energy platform Enelyst.

Prior to the report, a Bloomberg survey found estimates ranging from 68 Bcf to 81 Bcf, with a median of 78 Bcf, while a Reuters poll found a low estimate of 68 Bcf and a high of 85 Bcf with a median of 80 Bcf. NGI’s model predicted an 84 Bcf injection.

Last year, EIA recorded an 82 Bcf injection for the period, and the five-year average is a 77 Bcf build. The agency reported an injection of 70 Bcf for the week ending Sept 4.

The latest injection reflected in part cold weather across the Rockies and into the central United States during the covered week. The build for the Sept. 11 week pushed inventories up to 3,614 Bcf from 3,079 Bcf a year earlier, well above the five-year average of 3,193 Bcf.

“No matter how you cut it, this is a tremendously weak number,” Bespoke Weather Services said of the most recent injection. “With very low weather demand on the way, we really need to see more significant tightening to avoid containment issues over the next few weeks.”

LNG feed gas hovered above 7 Bcf on Thursday as it had all week, Bespoke noted, an encouraging level well above the norms of the summer months, when demand dried up amid the lockdown measures imposed in key export destinations to curtail spread of the coronavirus. But concern permeated markets that additional gains could prove difficult to generate with the Cameron LNG export facility still shut down due to the impacts of former Hurricane Laura late last month.

“No firm timeline on a return to service has been provided yet, but it appears the largest hang-up is the restoration of the local electricity grid, as Cameron pulls its power off the grid, unlike most facilities, which generate their own power from natural gas,” analysts at Tudor, Pickering, Holt & Co. (TPH) told clients early Thursday. “At a minimum, expectations are for the facility to remain down through October, which will keep a cap on U.S. LNG utilization around current levels.”

TPH estimates current U.S. LNG export capacity utilization at around 90%, or an average of around 7.4 Bcf/d during the current week.

“Despite the extended Cameron outage, current feed gas demand is still exceeding our expectations for September,” the TPH analysts said. They added that if Cameron resumes operations sooner than expected, it could infuse “potential bullish upside” to the containment picture.

Domestic industrial demand, meanwhile, continues to increase, but the pace appears vulnerable. The Federal Reserve said this week that U.S. industrial production rose a mere 0.4% in August, down from a 3.5% increase in July and a 6.1% increase in June – increases that marked a rebound from a pandemic-induced collapse last spring.

“Balances aren’t exactly shoring up as fast as any of us would like,” an analyst said on the Enelyst platform Thursday. A further LNG recovery and any upticks in industrial demand would “start to move the needle in the coming weeks, but I’m not betting the farm on it.”

Meanwhile, Sally, which made landfall on Alabama’s coast Wednesday morning, caused extensive flooding and damage across dozens of coastal communities in the Gulf of Mexico (GOM) and inland this week. Due to precautionary offshore shut-ins, gas production was down but forecasters suspected that power outages and evacuations could result in even greater demand loss this week from the storm.

As of midday Thursday, approximately 25% of natural gas production in the GOM remained shut-in, according to the Interior Department’s Bureau of Safety and Environmental Enforcement (BSEE). Around 31% of oil output also was shut-in, the BSEE estimated based on 29 operator reports.

While hot in the West, forecasts showed comfortable temperatures ranging from the 60s to 80s over much of the eastern half of the country.

“This is still the type of pattern we expect to hold into October as well, keeping demand rather low,” Bespoke said.

Sally, downgraded to a tropical depression by Thursday, brought heavy rains and cooling winds to the GOM, and those conditions were expected to spread into the Southeast and Mid-Atlantic this week.

Additionally, forecasters were watching a new tropical system that could gain strength and evolve into a powerful storm by next week.

“In the tropics, a new feature has formed in the Bay of Campeche and looks likely to become our next tropical storm over the next day or two,” Bespoke said. “Steering currents are very weak, meaning this system will move very slowly and erratically, but could pose a risk to the western Gulf this weekend into early next week.”

Next day prices were down across the country.

Elsewhere, OGT shed 29.0 cents to $1.570, and Dominion Energy Cove Point lost 24.0 cents to $1.630.In California, where prices have seesawed for much of September amid an historically treacherous wildfire season, SoCal Citygate declined 25.5 cents to $2.550 a day after posting a strong gain.