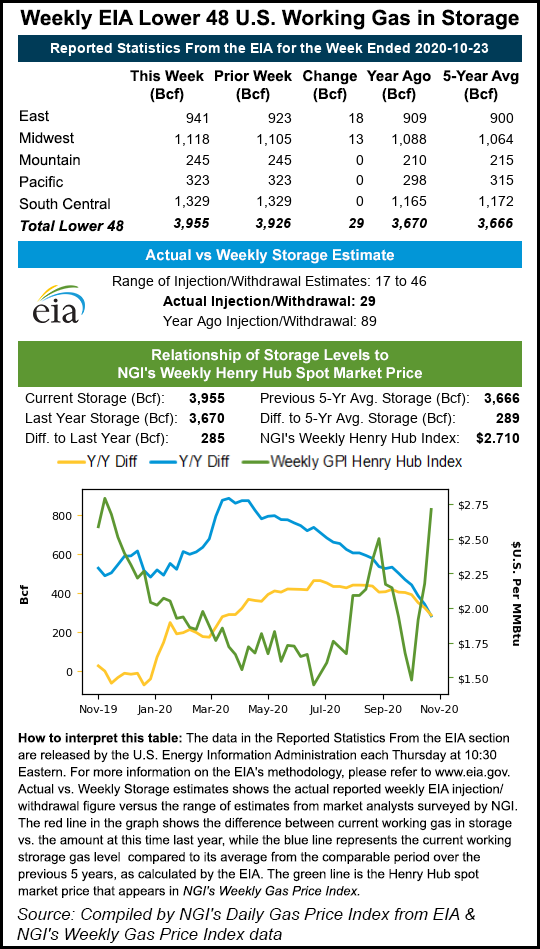 The reported build compares with last year’s 89 Bcf injection and the five-year average build of 67 Bcf. The EIA figure came in on the low end of wide-ranging estimates from a 17 Bcf build to a 46 Bcf injection. NGI projected inventories would climb by 42 Bcf.

December Nymex futures were down sharply Thursday morning as weather models confirmed a warming outlook for mid-November. In the minutes leading up to the EIA report, the prompt month was trading about 10 cents lower day/day at $3.190.

“It looks like the market is digesting $3 after all,” said Huntsville Utilities natural gas scheduler Donnie Sharp. “A couple of twists on storage, and there you are. People can learn to like the taste of anything.”

Bespoke Weather Services chief analyst Brian Lovern said the 29 Bcf injection is a “notably tighter” number than expected in terms of supply/demand balances. For now, the higher prices have not materially impacted demand.

“At some point, some impacts should be seen, but we have also stepped higher in LNG again this week,” Lovern said. “In short, it is a bullish report, and any turn back supportive in the weather will lead to higher prices rather easily.”

Participants on The Desk’s online chat Enelyst pointed out “all those eggs” in the data. The EIA showed no week/week net change in inventories in the Mountain, Pacific and South Central regions. The South Central reported a surprise 1 Bcf draw from nonsalt facilities, while salts reported no change.

The Energy Authority’s Mike Zaccardi, market research analyst, said he is seeing daily withdrawals from storage. However, an upcoming mild spell “should keep storage around the 3.95 Tcf level before dropping off a bit come end-of-season time.” Category 2 Hurricane Zeta avoided the liquefied natural gas export facilities “nicely” and foreign gas prices are on the rise.

The tropics could still be a future storm issue, according to Zaccardi. “We’ll see what happens. We could have Eta late next week.”

As NGI previously reported, the Atlantic hurricane season has gone through every name on the list of storm names. Zeta was the sixth name using the Greek alphabet. The NHC reached the sixth Greek letter previously one time, in 2005.

“That surplus is getting worked off in a hurry,” said Enelyst managing director Het Shah.