Natural gas futures crumbled further on Monday as weather models continued to warm, perhaps even a bit too much. With production above 100 Bcf/d and Freeport LNG still offline, the January Nymex gas futures contract settled at $5.577/MMBtu, down a jaw-dropping 70.4 cents from Friday’s close. February futures slid 68.5 cents to $5.484. 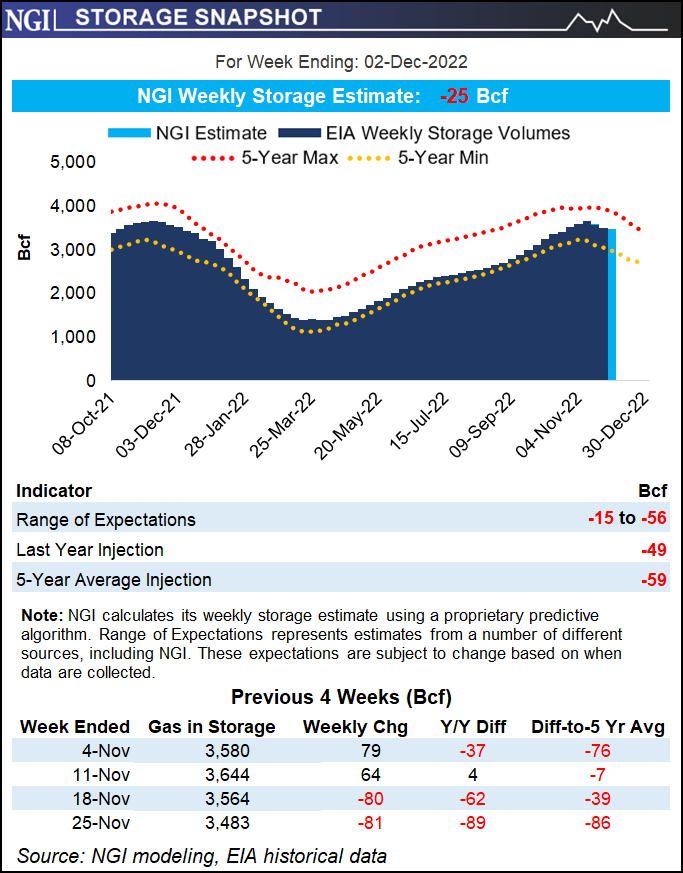 NatGasWeather said both data sets were “quite bearish” overall through Dec. 15. This is largely because of warmer-than-normal temperatures covering the southern and eastern United States on most days. That said, the forecaster noted that the GFS is nearly 20 HDDs warmer than the European model for the coming 15 days, which would likely lead to a revision one way or the other.

The weekend weather data teased a colder pattern finally setting up Dec. 16-20, but there have been multiple instances in recent weeks where the data was cold and then shifted warmer. As such, the natural gas markets didn’t give the frostier forecast much credence on Monday.

NatGasWeather said frigid air over Canada is expected to dive into the Pacific Northwest and Northern Plains/Midwest going forward. However, the weather data failed to advance it eastward, instead favoring the warm ridge over the southern and eastern United States to effectively block the cold air from advancing out of the Midwest through the middle of the month.

“There will be potential for cold air to eventually spread across the northern and eastern U.S.; it just won’t be until after Dec. 15,” NatGasWeather said.

With warmer weather in place beginning last week, the reduction in gas demand for heating is likely to stall the string of hefty storage withdrawals the market has seen the past couple of weeks.

Preliminary withdrawal estimates for the upcoming Energy Information Administration (EIA) inventory were ranging widely on Monday, from a draw as light as 15 Bcf to one as stout as 56 Bcf for the week ending Dec. 2. NGI projected a 25 Bcf pull.

Last week, the EIA reported a larger-than-normal 81 Bcf withdrawal from stocks for the week ending Nov. 28. The draw left inventories 89 Bcf below year-earlier levels and 86 Bcf below the five-year average.

However, given the mild weather outlook this month, NatGasWeather said stocks could flip back to a surplus over the five-year average after the next three EIA reports are accounted for. “If cold fails to arrive for Dec. 17-30, surpluses will increase further.”

Although it appears much of the Lower 48 may be sporting summer attire for a couple more weeks, EBW Analytics Group LLC said the first week of December remained far too early to call winter finished. After all, the market is still awaiting the return of liquefied natural gas exports from Freeport LNG. Two carriers were reportedly anchored off the Texas coast.

Intake volumes at other LNG export facilities also have fluctuated over the past week. NGI data showed feed gas deliveries back at 12.17 Dth on Monday, up from weekend lows but still off from a peak of 12.97 Dth last week.

No doubt, LNG demand is poised to climb in the coming weeks as frigid weather that has finally arrived in Europe is likely to keep the call high on U.S. LNG.

The bitter conditions are expected to linger through the six- to 10-day period as well, according to MWD forecasters. Germany and Poland may be particularly cold as upper level troughing generates below-normal readings in the UK, France as well as western and central Scandinavia. MWD also projected rough seas in the Northeast Atlantic amid an unsettled weather pattern throughout the week.

Back in the Lower 48, EBW said forecaster DTN has reiterated its call for a transition to a cold mid- to late December, potentially offering bullish hope and avoiding a full collapse in Nymex winter risk premiums.

If the more wintry forecast comes to fruition, natural gas remains on the price-inelastic portion of the demand curve and could yet regain losses, according to the firm.

Most U.S. spot gas prices continued to retreat on Monday amid a balmy weather pattern and light demand.

In West Texas, pipeline maintenance that was set to begin on Permian Highway Pipeline (PHP) on Tuesday sent prices crashing down into negative territory.

Kinder Morgan Inc. said PHP’s capacity would be reduced through Friday to 1.1 Bcf from 2.1 Bcf. Throughput is set to return to the normal capacity from Dec. 10-12, but is set to fall again to 1.65 Bcf from Dec. 13-16. PHP is scheduled to resume normal operations on Dec. 17, according to Kinder Morgan.

With gas flows out of the Permian limited, cash prices cratered. Waha plunged $2.945 from Friday to average only 26.5 cents for Tuesday’s delivery. The lowest price at the West Texas location was seen at negative 30.0 cents.

Meanwhile, West Coast cash prices recovered swiftly from pre-weekend lows as frigid air was in store for the region this week.

This area also may see the threat of accumulating snow, particularly early in the week. Although amounts are not expected to be heavy for the most part, northwestern Montana and northern Idaho could see more than a foot of snow.