Natural gas futures flexed some pricing muscle on Friday on the heels of a solidly bullish storage report and a shift hotter in an already sizzling late-summer weather outlook. The August Nymex gas futures contract gained 36.7 cents day/day and settled at $8.299/MMBtu to close the week. September advanced 38.0 cents to $8.195. 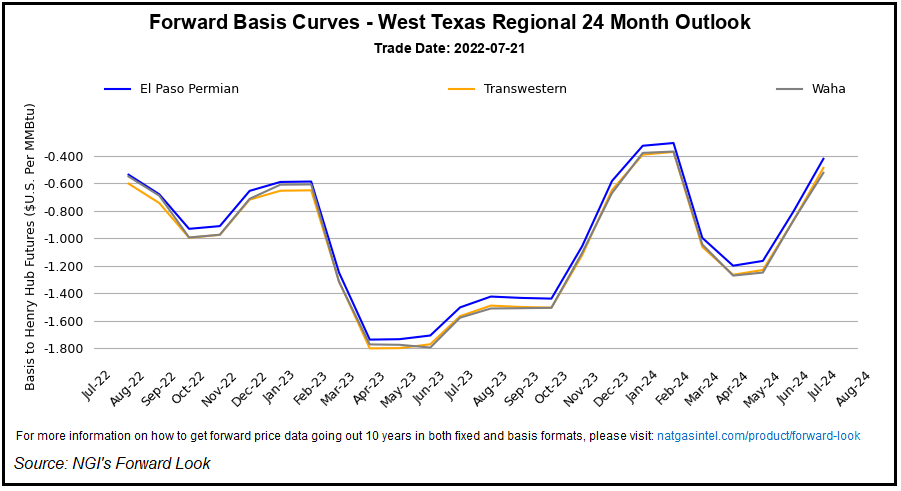 Markets on Friday mulled the implications of a seasonally weak inventory build and the prospect of more to come as exceptional cooling demand has come to define the summer of 2022.

The U.S. Energy Information Administration on Thursday posted a 32 Bcf injection of gas into underground storage for the week ended July 15. The print fell short of expectations and historic norms.

Polls ahead of the EIA report pointed to an increase in the mid- to high-40s Bcf. The actual build compared to the 50 Bcf increase in the comparable week last year and a five-year average injection of 41 Bcf.

The injection raised working gas in storage to 2,401 Bcf, though stocks were 328 Bcf below the five-year average.

“Carrying forward even a portion of tighter supply/demand balances implied” by Thursday’s report “dropped our end-of-season storage target by 40 Bcf to well under 3.4 Tcf,” Rubin said.

The next two EIA prints “should be even tighter,” given robust demand, Rubin added. “If the scorching weather outlook verifies and the storage deficit versus the five-year average rises to 375 Bcf in early August as projected, another leg higher for natural gas is possible.”

Summer heat remains a “primary driver of price action” for the natural gas market, having pushed power generation demand to an all-time high at 47.5 Bcf/d during the July 17-22 week, roughly 6 Bcf/d above seasonal norms, according to the TPH analysts.

Analysts at The Schork Report said the government assessment came in 24% below the most conservative forecast in major polls. About halfway through the storage refill season, they said, the market has covered 45% of last winter’s gas deliveries.

“This is not good enough and the market agrees with us,” the Schork analysts said, referring to the prompt month trading above $8. “This is the clearest possible telltale of the market’s angst regarding the adequacy of this summer’s refill pace.”

The market had anticipated that the Freeport LNG outage – caused by a June fire – would ease supply worries even in the face of prolonged heat. The outage cut export capacity by 2.0 Bcf for the summer – and likely longer – and that gas is now available for domestic use. But utilities are eating through the added supply and still struggling to narrow the storage deficit to the five-year average.

Meanwhile, output climbed to around 97 Bcf early in the past week – near a summer high. But producers were not able to sustain that level as maintenance projects interrupted momentum and curbed output to around 95-96 Bcf late in the week.

Forecasts Friday provided no offset to the lackluster production.

Bespoke Weather Services said widespread high temperatures in the 90s and 100s put this month on track to be one of the three hottest Julys on record. Now, the latest outlooks shifted hotter and put next month on a path to become one of the five hottest Augusts in the firm’s data set.

“If this heat does indeed continue throughout August, it is likely that prices still move higher from here, and end-of-season storage projection could fall as low as 3.25 Tcf, with hot weather having eaten away most of what Freeport gave the market,” Bespoke said. “Such a scenario would mean prices could still manage to touch $10.00 yet.”

NatGasWeather painted a similar picture. “The longer a hotter-than-normal U.S. pattern lasts, the less damage the Freeport outage will ultimately inflict,” the firm said. “So far it hasn’t been much, with deficits not improving since it went offline, and even potentially increasing the next few weeks on recent and coming heat.”

Cash prices cruised ahead Friday as they have much of July, led higher by hubs in the Midwest and South.

NatGasWeather said Friday the American and European forecast models continued to show “a hot and bullish pattern most of the next 15 days.”

The firm sees exceptionally robust cooling needs early in the week ahead as highs of 90s and 100s “rule” most of the country.

Temperatures will be hottest from California to the Great Plains with highs of upper 90s to 110, while also blazing with highs of 90s over major East Coast cities, NatGasWeather added.

Looking into August, hot high pressure would likely span the southern two-thirds of the Lower 48, delivering more highs in the 90s and above, with the most extreme heat in the Southwest and Texas. “Overall,” the forecaster predicted “strong national demand” heading into next month.

Over the weekend, forecasters saw little in the way of potential hurricane activity in the Atlantic. However, AccuWeather meteorologists were anticipating severe weather events in the Midwest.

Storms were forecast to develop by Saturday afternoon from central Minnesota to northern Wisconsin. They were expected to strengthen over the weekend, with Minneapolis first in line for harsh weather.

“As the storms progress to the south and east,” AccuWeather said Friday, “they will intensify further, and all hazards will be possible,” including tornadoes.