Only 32 Bcf of natural gas was injected into storage for the week ended July 15, the U.S. Energy Information Administration (EIA) reported on Thursday. The print fell far short of expectations amid inventory decreases in a South Central region barraged by unrelenting heat. 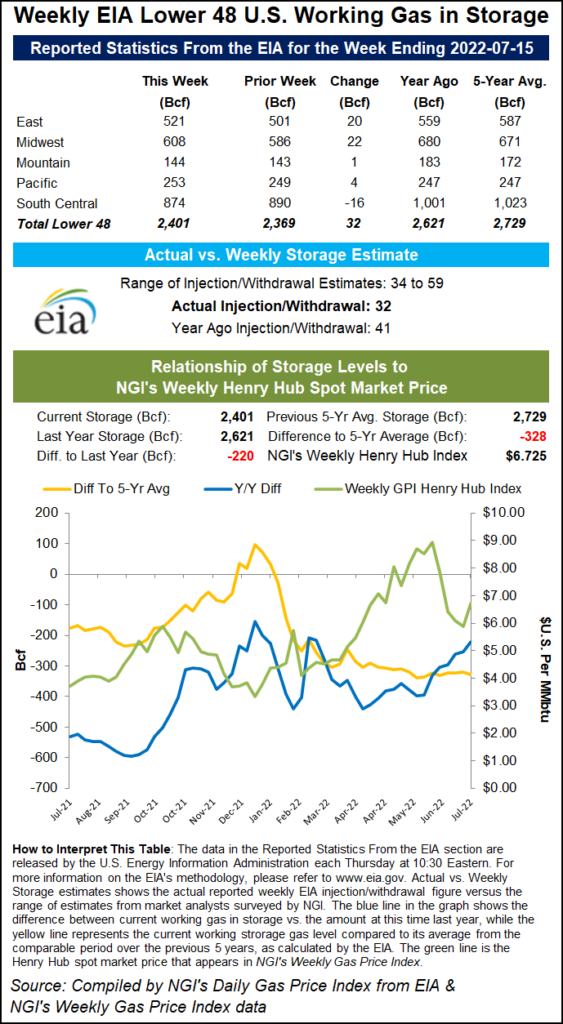 Median estimates of major surveys ahead of the print hung in the mid- to high-40s Bcf. As a result, Nymex natural gas futures advanced on the news.

The prompt month, however, jumped a few cents into the green when the EIA data was released. By 11 a.m., it was up 13.7 cents from Wednesday’s regular session close to $8.144.

Temperatures during the latest EIA report week were hotter than normal over much of the country, particularly across Texas and much of the South, while production was uneven. Amid sporadic maintenance projects, output has fallen short of sustaining the 97 Bcf level many analysts expected by mid-July.

Excessive heat in Texas and neighboring states during the week appeared to “jump power burns and hit production at the same time,” an analyst on The Desk’s online energy platform Enelyst said. It “feels like the dead of winter” in terms of storage in that part of the country.

South Central region stocks dropped 16 Bcf, with a 15 Bcf draw from salt facilities and nonsalt inventories holding flat. EIA noted that totals sometimes do not equal the sum of components because of independent rounding.

Elsewhere, the Midwest and East led with injections of 22 Bcf and 20 Bcf, respectively, according to EIA. Pacific inventories rose by 4 Bcf, while Mountain region stocks increased by 1 Bcf.

The build lifted working gas in storage to 2,401 Bcf, though stocks were 270 Bcf lower than a year earlier and 328 Bcf below the five-year average.

Prior to the EIA report, results of Bloomberg’s poll showed a median injection projection of 43 Bcf, with a low estimate of 34 Bcf and a high of 59 Bcf.

Reuters’ survey produced injection estimates that spanned 36 Bcf to 59 Bcf. It landed at a median of 48 Bcf.

A Wall Street Journal poll found an average injection expectation of 48 Bcf; it generated a range of 39 Bcf to 59 Bcf.

The actual result compared with a build of 50 Bcf during the same week last year and a five-year average injection of 41 Bcf.

Looking ahead to next week’s report, covering the period ending July 22, participants on Enelyst were looking for a build in the 20s to 30s. They cited increased production at the start of the week, but they noted exceptional heat and cooling demand is entrenched across most of the Lower 48.

Analysts also said downward revisions were likely after Thursday’s print, and one analyst said a net draw was possible, given continued robust demand.