Natural gas futures managed a rebound from the prior day’s massive sell-off, even as the persistently warm December outlook trimmed gains from early in the session. After touching a $3.829/MMBtu intraday high, the January Nymex gas futures contract settled Tuesday at $3.708, up 5.1 cents on the day. February climbed 4.9 cents to $3.674. 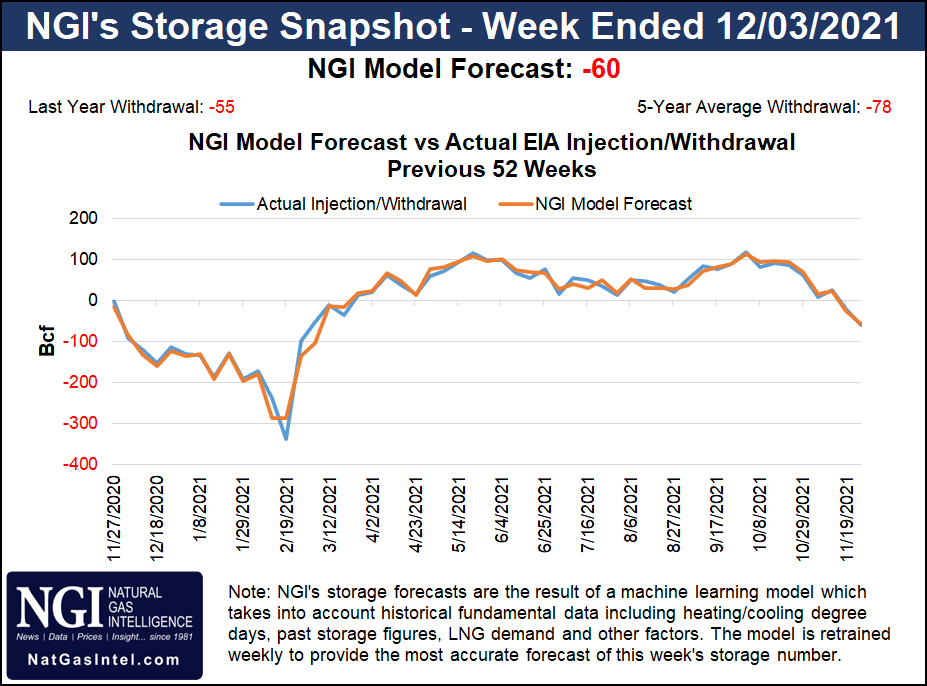 After tumbling $1.820 in only six trading days, a recovery of some magnitude was expected. Still, after trending mostly warmer in recent runs, the latest weather models shifted slightly cooler after the middle of the month and provided the jolt bulls needed.

Bespoke Weather Services said the latest forecast had done little to change the narrative over the next couple of weeks, at least. Conditions remain locked in a warm state and are still on pace to result in the second warmest December on record, behind only December 2015.

“That said, there are still some things we are watching that could bring changes toward the end of the month, starting around the holiday period,” Bespoke said.

The changes would not instantly change the pattern, according to the forecaster, but would be a key first step in at least denting the high-end warmth. “These trends will be watched very closely in the coming days to see if it gains traction, or is simply another ‘false alarm,’” Bespoke said.

Although U.S. gas prices appeared to have decoupled from global gas markets, NatGasWeather said Tuesday’s rally also may have been linked to Dutch Title Transfer Facility (TTF) prices. TTF prices spiked 6% early in their session and were strong so far this week, according to the firm.

The recent strength in the European benchmark has occurred as the continent’s first cold snap of the season arrived over the weekend, cutting into its already dismal storage stocks. Inventories in Europe by Tuesday were cut to 66.8% of capacity from 67.5%.

Maxar’s Weather Desk said widespread “below, much below and strong below anomalies’ were expected this week over large parts of Europe as an upper level trough was building across northern and central parts of the continent. Warmer weather was expected for the next six to 10 days.

However, if storage is depleted at a rate similar to the five-year average, Europe could end winter with natural gas inventories at only 21% of capacity, according to Rystad Energy.

Rampant LNG demand from Europe and Asia has helped to keep a floor under U.S. prices in recent weeks. In the Energy Information Administration’s (EIA) latest Short-Term Energy Outlook, the agency said LNG exports were expected to average 9.8 Bcf/d in 2021, a 50% increase from 2020. Exports of the super-chilled fuel are then set to rise to an 11.5 Bcf/d average in 2022, up 17% from 2021.

However, the agency said its outlook remains subject to heightened levels of uncertainty related to the ongoing recovery from the Covid-19 pandemic. “Notably, the emergence of the Omicron variant raises uncertainty about the level of energy consumption throughout the world compared with last month’s forecast,” it said.

Given the precipitous fall for U.S. gas prices in recent weeks, EIA forecast Henry Hub spot gas prices to average $4.58 from December to February and then gradually decline through 2022. The winter prediction reflected a nearly $1 decline from the prior month’s forecast, when EIA called for Henry Hub to average $5.51 for November-February. Overall, the agency expects the U.S. benchmark to average $3.98 next year amid rising domestic gas production and slowing growth in LNG exports.

Meanwhile, EIA said U.S. inventory draws this winter are likely to be similar to the five-year average. The balmy weather seen potentially lingering into early January continues to chip away at the current storage deficit. Early estimates for the upcoming EIA storage report are ranging from a draw as low as 40 Bcf to as steep as 60 Bcf. A Bloomberg survey produced a median draw of 60 Bcf. NGI also modeled a 60 Bcf pull.

For comparison, EIA recorded a 55 Bcf withdrawal in the year-ago period, and the five-year average pull is 78 Bcf.

Spot gas prices were higher across the country on Tuesday, but with moderate temperatures continuing across most of the country, gains were rather small.

AccuWeather said two weather systems are expected to bring a swath of snow over parts of the Ohio Valley and central Appalachians Tuesday night to the mid-Atlantic on Wednesday. The system then would move into New England from Wednesday afternoon to early Thursday. The storm may gather more strength as it heads farther northeast and approaches New England. The air is also to be colder with more moisture present in the atmosphere when the storm arrives.

As pipelines in the region typically run at full capacity, there is little wiggle room for securing additional gas supplies in the event of sustained cold. The tight conditions often drive up prices in the region during the winter, and this week’s event is no exception.

In a blog posted on Monday, CEO Gordon van Welie of the Independent System Operator – New England, aka ISO-NE, said oil and LNG in recent years have filled the gaps when extended periods of very cold weather have constrained natural gas pipeline supplies. Higher prices globally for these fuels, as well as pandemic-related supply chain challenges, could limit their availability in New England if needed to produce electricity this winter.

“The region would be in a precarious position if an extended cold snap were to develop and these fuels were not available,” van Welie said.

Meanwhile, Tennessee Gas Pipeline Co. on Monday declared a force majeure at Station 261, cutting about 44 MMcf/d into the Boston area as the operational capacity of Segment 261FH was decreased by 146 MMcf/d. The duration of the event was unknown.