There was no getting off the world’s scariest roller coaster on Wednesday. After blasting to a $6.466/MMBtu intraday high, November natural gas prices plummeted all the way back down to $5.663. The prompt Nymex contract ultimately settled at $5.675, off 63.7 cents from Tuesday’s close. December plunged to $5.803. 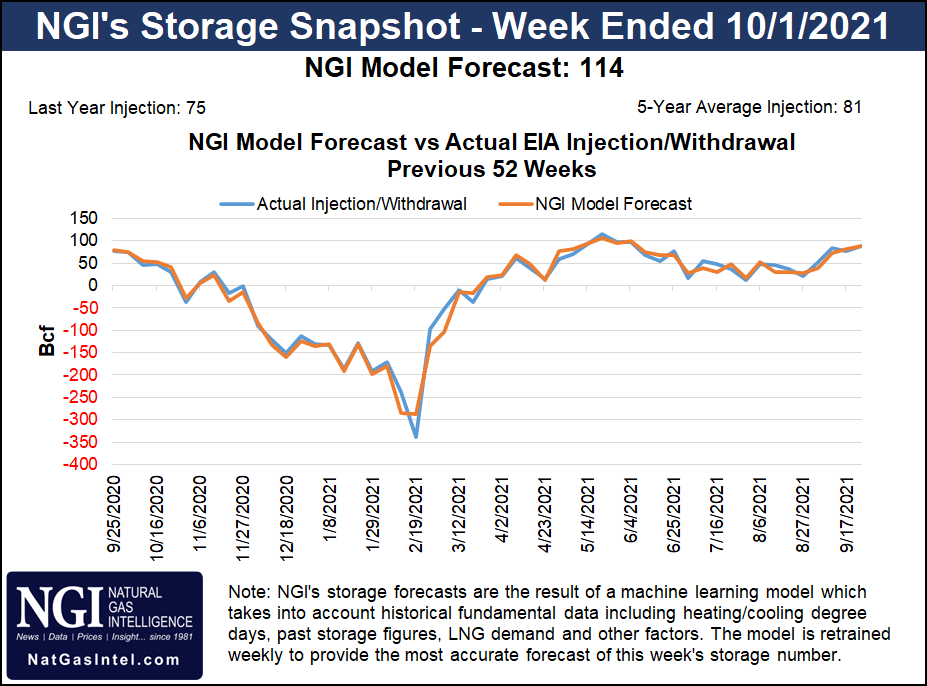 Spot gas prices also tumbled from prior day highs amid a moderate temperature forecast for much of the Lower 48. NGI’s Spot Gas National Avg. slid 25.5 cents to $5.715.

In yet another erratic day of trading for Nymex futures, it appears bearish domestic fundamentals and some technical factors got the upper hand midweek as prices were lower to kick off Wednesday’s session.

Despite the rumbling overseas about potential energy shortages this winter, U.S. supplies are on much stronger ground than they were only a month ago. Inventories as of Sept. 24 stood 575 Bcf below year-ago levels and 213 Bcf below the five-year average, but forecasts for mild weather through at least the end of October are seen leading to plump inventory builds that could quickly tighten up those deficits.

Estimates for the next government storage report point to the possibility of a triple-digit injection. A Bloomberg survey produced results ranging from a build of 101 Bcf to as high as 114 Bcf. The median of those results was a 105 Bcf injection.

A Wall Street Journal poll included injections as low as 84 Bcf, but the average still landed at a stout 102 Bcf. Reuters’ poll was wider, with high-side estimates hitting 115 Bcf and the median injection coming in at 104 Bcf. NGI modeled a 114 Bcf injection.

A storage build even at the low end of major surveys would surpass the five-year average build of 81 Bcf as well as last year’s 75 Bcf injection, according to the Energy Information Administration (EIA). Last week, the EIA reported a 88 Bcf injection into storage.

“Needed the $6.535 level breached to have confidence in an upside breakout,” LaRose said in a note to clients. “Bulls could not get the job done.”

Weather is certainly doing its part to embolden bears. There hasn’t been much change in long-range weather forecasts, with “exceptionally light” U.S. demand expected to continue.

NatGasWeather said the mild pattern includes highs over the eastern two-thirds of the U.S., mainly in the “comfortable” mid-60s to 80s and with very little coverage of highs of 50s or 90s. Cooler exceptions were expected to continue over the Northwest and Mountain West as Pacific systems bring much-needed valley rains and mountain snows.

However, “we continue to look to late October for when more impressive cold fronts will attempt to sweep across the Midwest and East,” NatGasWeather said.

Of course, that doesn’t mean price moves will only be lower from here. Instead, recent price volatility is a pure reflection of how interconnected the U.S. and global markets have become in the past five years. On Wednesday, for example, British and Dutch futures fell about $3 each day/day to settle near $37, but not before touching intraday highs of roughly $55 each.

With natural gas in tight supply, and coal usage for power generation nearly exhausted, Asia and Europe have continuously tried to outbid each other in order to attract more molecules ahead of winter. Both regions drew down storage inventories following last year’s harsh winter, and a hot summer prevented the rebuild typically seen throughout the injection season.

The dramatic escalation in prices has attracted the attention of global leaders, along with U.S. gas traders looking for any indications of just how bad the winter may get. Criterion Research LLC analyst James Bevan told NGI that though there is a limit to how much gas the United States can actually export, that figure is set to climb in the coming months with the ongoing commissioning and eventual in-service of Sabine Pass Train 6 and Calcasieu Pass liquefied natural gas (LNG) facilities. “It shouldn’t be a shock to see record-high LNG flows during the winter season, assuming Europe and Asia remain at their current crisis levels.”

Furthermore, U.S. prices would likely continue to rise if weather turns decidedly colder in the Lower 48. Even though LNG facilities may be maxed out, “a cold winter would likely try and pressure those prices up high enough to justify pivoting feed gas flows back into the power grid if need be,” Bevan said.

Will Cash Lead The Way Lower?

Losses were steepest in the Northeast, where daytime temperatures in the mid-60s to low 80s do little to either spur heating or cooling demand. Iroquois Zone 2 next-day gas plunged 39.5 cents to average $5.800 for Thursday’s gas day. Upstream in Appalachia, Millennium East Pool dropped 20.0 cents to $4.900.

Cash markets in the middle of the country also posted sharp decreases midweek. Consumers Energy was down 28.0 cents to $5.745, and Panhandle Eastern was down 37.0 cents to $5.515.

Similar declines were seen across California and the Rockies as cooler weather was set to move into those regions, along with rain. AccuWeather said many locations that saw temperatures reach the 80s on Tuesday may reach only the 60s and 70s on Wednesday. By Thursday and Friday, highs will struggle to get out of the 50s in some instances with cooler air combined with clouds and precipitation.

“A storm will begin to cool things down across the northern Rockies on Thursday and Friday, with areas from northern Nevada into Montana and Wyoming getting some rainfall,” said AccuWeather meteorologist Rob Richards.

Snow also could fall by Monday in the Cascades of Washington and Oregon and on Tuesday, a dip in the jet stream may become very pronounced across the Southwest. “Much colder air combined with a stalling storm may lead to significant snowfall in parts of the West,” according to AccuWeather.