As the market braced for potential price-moving impacts of both updated government inventory data and the prompt month contract expiration Thursday, natural gas futures advanced in early trading. The expiring June Nymex contract was up 22.6 cents to $9.197/MMBtu at around 8:50 a.m. ET. July was up 19.4 cents to $9.187. 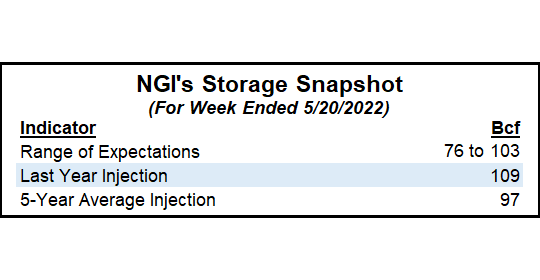 The Energy Information Administration (EIA) in its 10:30 a.m. ET storage report is expected to reveal a net injection into U.S. natural gas stocks of around 90 Bcf for the week ended May 20, surveys this week show.

A print in line with estimates would compare bullishly to the five-year average injection of 97 Bcf. The year-earlier injection was 109 Bcf, EIA data show.

Price action Thursday is likely to be “governed by” market response to the latest EIA data release and dynamics associated with the looming expiration of the June contract, EBW Analytics Group analyst Eli Rubin told clients.

“We lean toward the low end of consensus expectations for a 86-91 Bcf build, with the price impact of a storage miss likely magnified by today’s final settlement,” Rubin said. “Any potential gains later today, however, may be quickly reversed heading into the traditionally weak Memorial Day weekend.”

The longer-term view still points to a continuation of the conditions that have helped send Henry Hub prices soaring well above the $8 mark, Enverus Intelligence Research analysts said in a recent report.

Meanwhile, Maxar’s Weather Desk in its latest forecast predicted toasty temperatures for population centers in the Midwest and along the East Coast during the six- to 10-day time frame, running from Tuesday through June 4.

Further out in the 11-15 day time frame, Maxar called for the Midwest and East to experience a period of below-normal temperatures.

“Meanwhile, above-normal temperatures look to be mostly steady from the Southwest to Texas,” the forecaster said.