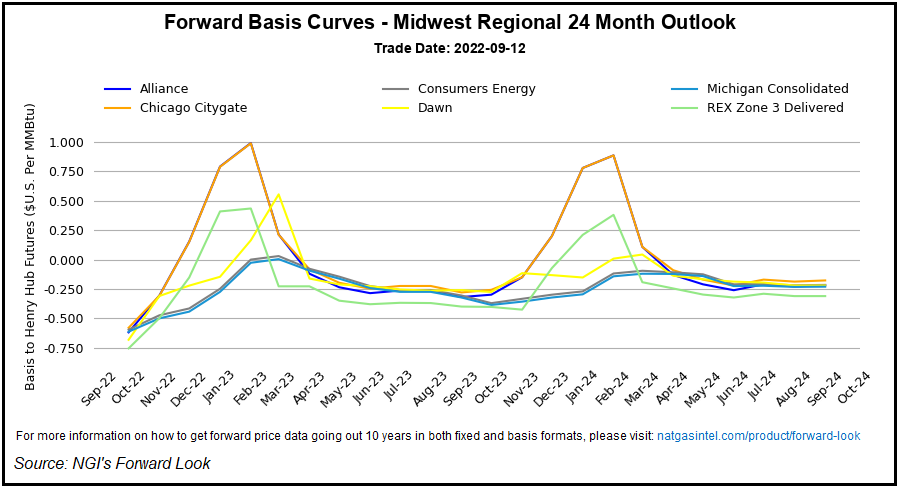 “The declines are concentrated in the Northeast, North Louisiana, Texas and the Rockies, where there are some maintenance events underway,” the Wood Mackenzie team said Tuesday. However, much of the repair work was expected to prove short-lived and “revisions are expected” this week.

On the weather front, meanwhile, EBW Analytics Group noted forecasts Tuesday showed stronger heat over the Midwest from Friday through next week (Sept. 16-22), potentially lifting highs into the 90s in Chicago.

The added 5 Bcf of cooling demand over that period is “a notable counter-seasonal warming,” said EBW’s Rubin, senior analyst. Additionally, “with coal and nuclear units entering maintenance, it may result in an elevated call on gas-fired demand.”

Should summer demand persist, it could limit utilities’ collective ability to bolster injections of gas into storage enough to ensure adequate supplies for the coming winter.

EIA reports its storage data for the week ended Sept. 9 on Thursday. Early estimates reported to Reuters showed an expected mean increase of 64 Bcf. The actual build in the comparable week of 2021 was 78 Bcf and the five-year average was 82 Bcf.

Russia’s decision earlier this month to suspend natural gas deliveries to Europe via the Nord Stream 1 (NS1) pipeline continues to weigh on the minds of traders, given the development adds upward pressure to already lofty demand on the continent for U.S. LNG.

The timing of a return of NS1 flows remains in limbo amid political fallout from Russia’s war in Ukraine and European sanctions against the Kremlin in opposition to the war, said analysts at Fitch Ratings Inc. In fact, they now assume countries within the European Union (EU) will not receive any Russian pipeline gas until the end of the year.

“Those with a high dependency on NS1 supplies and low immediate options to diversify gas sources, like Germany, have limited room for maneuver,” analysts wrote.

The development is likely to drive greater demand for U.S. liquefied natural gas.

Already, American exports of the super-chilled fuel hovered above 12 Bcf/d this week – putting U.S. facilities near capacity when excluding the offline Freeport LNG complex. Freeport is projected to return to service this fall after a June fire forced it to temporarily shutter.

“The news that Russia was suspending gas flows through the Nord Stream 1 pipeline crystallized fears that have been building since the invasion of Ukraine on Feb. 24,” Wood Mackenzie analyst Ed Crooks said.

“Europe is now essentially at the mercy of the weather,” he added. “If the continent has a mild winter, then European gas supplies should be adequate,” thanks in large part to LNG. “In an extremely cold winter, demand curtailments will be inevitable.”

Cash prices climbed Tuesday as heat persisted in the Midwest and Northern Plains, with highs in the mid-80s to lower 90s expected to last into next week, countering earlier forecasts for milder fall temperatures.

Lighter production also factored into cash market trading Tuesday. Wood Mackenzie said the overall day/day drop included a decline of around 385 MMcf/d in Texas, with the majority in the Permian Basin. There are two maintenance events this week in Texas that are expected to lift Thursday and Friday, respectively, Wood Mackenzie noted.

Additionally, output fell by 830 MMcf/d in the Northeast. Wood Mackenzie’s estimates showed lower volumes on the Transcontinental Gas Pipe Line, which this week issued an operational flow order for imbalances, noting limited flexibility for Zones 4 and 5 until further notice.

Cash prices also climbed across the Northeast Tuesday, with Algonquin Citygate helping to lead the charge. Prices at the hub near Boston rose 25.0 cents to $7.825.

Looking ahead, however, Wood Mackenzie noted that production is expected to rebound. Output has hovered near record levels at points in September as producers respond to strong prices.

On the weather front, NWS forecasts also call for moderate temperatures by late next week across the Northern Plains and the Midwest, likely resulting in a notable weakening of national cooling demand as October approaches.