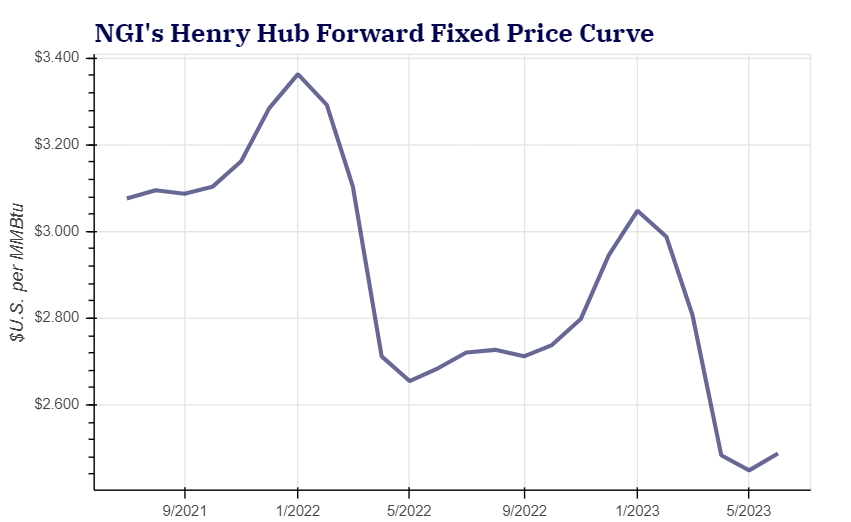 Numerous other hubs, including in Midwest and East Coast markets, expected to see the mercury rise in the days ahead and charted a leg higher in rhythm with the national benchmark.

As for Nymex futures, the July contract dropped 3.4 cents to settle at $3.041 Thursday, eroding the ground gained in an 11.8-cent rally two days earlier. The intensity of June heat, like prices, receded in the latest forecasts Thursday.

“After the big move hotter over the weekend, we now have back-to-back days where cooler changes are noted in the modeling,” Bespoke Weather Services told clients Thursday.

The risk that the “best heat” would shift “back into the Rockies and Plains toward the middle of the month, reducing heat in the population centers of the eastern U.S.” was materializing in the latest model runs, according to the firm.

“It does not bring about a cool pattern by any means, but takes overall demand closer to normal after next week,” Bespoke said. “We remain on pace for a hot June overall, but with this current forecast no longer project it to land in top three as far as hottest Junes on record” in terms of national gas-weighted degree day totals.

Given the moderating forecast and an Energy Information Administration (EIA) storage report print of 98 Bcf that ultimately did little to move the needle, bulls clearly seemed to be losing momentum after a promising start to the week.

From a technical standpoint, the bulls still have plenty to prove, according to ICAP Technical Analysis analyst Brian LaRose.

“Given the seasonal history associated with this time of year, the onus is on the bulls to prove the trend is up,” LaRose said in a research note prior to Thursday’s session. “There is only one way to do that — clear the $3.204 high. Succeed and the door will be open for a run at the $3.316 and $3.396 spot highs next. Fail to climb above $3.204 and the case for a deeper seasonal retreat will gain traction.”

Storage in the EIA South Central region ended the May 28 period at 959 Bcf, lagging the five-year average by about 5%.

U.S. pipeline exports to Mexico have been trending upward. However, this reflects the displacement of liquefied natural gas (LNG) imports and not the kind of power burn growth needed to substantially drive higher demand for cross-border flows, according to BTU Analytics analyst Connor McLean.

“One of the primary factors behind the recent increase in exports out of West Texas has been the displacement of LNG imports to the Manzanillo terminal in Colima, Mexico,” McLean said in a recent note. “While the Manzanillo terminal is ideally located to serve demand in Guadalajara…the recent completion of the La Laguna-Aguascalientes pipeline, the final leg of the Wahalajara pipeline system, allows cheap gas” out of the Permian Basin to serve that demand instead.

The displacement of LNG imports by pipeline gas to serve Mexico demand “represents low-hanging fruit that has mostly been picked,” the analyst added.

Reflecting strong access to downstream markets for associated gas out of the Permian, contracts for July delivery at West Texas hubs traded only a few pennies shy of Henry, according to Forward Look data.

The Permian saw the sharpest increase in drilling activity among U.S. producing regions over the past week, according to Enverus Rig Analytics. The firm’s latest tally showed 521 active U.S. rigs as of June 2, up eight week/week. That included an eight-rig increase in the Permian, which finished the period with 222 rigs.

“The Williston Basin added five rigs and reached a 2021 high of 19,” according to the firm. “On the downside, the Gulf Coast,” including the Eagle Ford Shale, “shed 10 rigs in the last week and now has 56 running.”

The transition to summer has seen forward prices at hubs along the West Coast trade at substantial premiums to Henry Hub. July basis at SoCal Citygate ended the May 27-June 2 period at a $2.927 premium to the benchmark, while SoCal Border Avg. basis finished at $1.093 for July, a 9.7-cent week/week increase.

PG&E Citygate basis ended the week at plus-$1.201 for July, while Malin basis climbed 6.7 cents for the period to plus-32.4 cents.

Day-ahead prices at SoCal Citygate spiked late last week (notably on the May 28 trade date) and approached the $5.000 mark on Tuesday.

Wood Mackenzie analyst Joseph Bernardi pointed to a combination of “upstream price strength at Waha, forecasts revising warmer than expected, and a maintenance event,” which limited imports into the Southern California Gas system through its Southern Zone over the holiday weekend as contributors to the premium prices in the region.