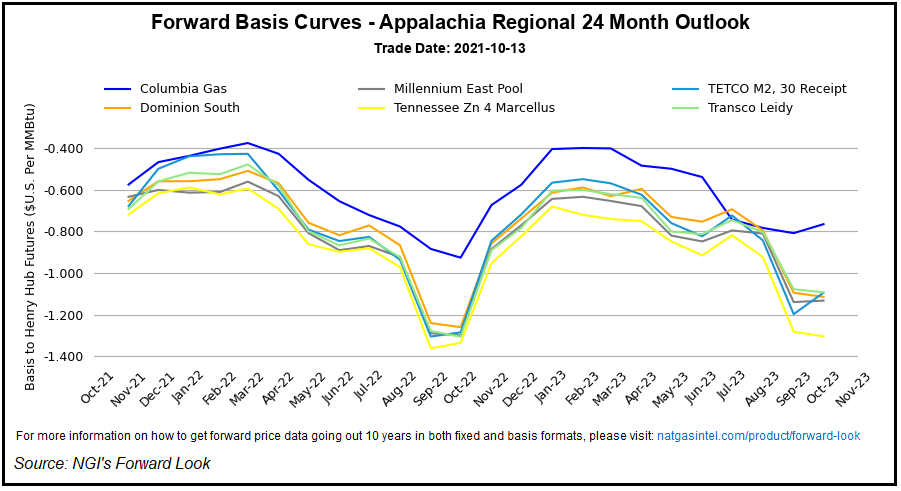 “The market continues to price Nymex natural gas within the context of discounting a potential extreme winter driving a convergence between Nymex and global pricing,” analysts at EBW Analytics Group said in a recent research note. “A simple regression analysis suggests that, since the beginning of September,” price moves for the Dutch Title Transfer Facility benchmark “could explain 72% of the movement in Nymex futures.

“At this early, pre-winter stage, the market needs to account for this tail risk of extreme winter weather driving a tight enough domestic market to ultimately need to shut in” liquefied natural gas (LNG) exports, which would force “domestic prices to converge with global levels.”

The November Nymex Henry Hub contract finished higher for a third straight session Thursday, tacking on 9.7 cents to settle at $5.687/MMBtu. The market turned in another characteristically volatile trading day that saw the prompt month push as high as $5.964. However, the bears subsequently stepped in on Friday to drive prices 27.7 cents lower, leaving the front month at $5.410 to close out the week.

Looking at the domestic supply/demand picture, a smaller-than-expected 81 Bcf injection into U.S. natural gas stocks for the week ended Oct. 8 was revealed in the latest U.S. Energy Information Administration (EIA) storage report. It broke decisively from a string of high-side surprises in the agency’s weekly data release.

The print, however, narrowly topped the prior five-year average 79 Bcf injection for the period, marking the fifth consecutive week in which stocks have narrowed the deficit versus historical norms.

With the above-average EIA builds in recent weeks perhaps serving to allay some of the market’s anxieties, the latest report’s miss to the bullish side offered up a different look to the storage situation. Still, analysts pointed to a temporary drop in wind generation as the likely driver of the leaner build, with the injection rate expected to increase for the following week’s print.

“It is definitely a much tighter number than the last several numbers, supply/demand balance-wise, though the super low wind keeps us at a neutral rating, as wind is much higher this week and likely leads to a looser number week/week in next week’s report,” Bespoke Weather Services told clients Thursday.

Energy Aspects in a recent research note placed its projected end-October carryout at 3.52 Tcf, which would represent a 380 Bcf decline year/year.

Looking in particular at the South Central region, after draws on salt stocks set a record rate for July to August, inventories have since stabilized, according to the firm.

“Even as South Central inventories recover to near their five-year average by the end of October, growing baseload demand will likely constrain the region to year/year deficits into 2022 under normal weather,” Energy Aspects said.

Gulf Coast LNG liquefaction capacity is set to expand to drive feed gas demand higher by 1.0 Bcf/d year/year in the first half of 2022, according to the firm.

“Industrial demand will also see gains in the coming months, as ExxonMobil and SABIC’s multi-plant facility in San Patricio County, TX, is commissioning before a late 4Q2021 startup that will add 0.1 Bcf/d to gas demand,” Energy Aspects said.

“Weather will remain a wildcard during the 2021-22 heating season — forecasts increasingly point to a La Niña weather pattern, which typically means a milder, dry winter in the southern U.S. — but baseload demand is likely to extend the pressure on inventories.”

The November contract on Thursday settled slightly below a key technical target identified by ICAP Technical Analysis. Bulls have work to do in order to “make the case for a bottom at $5.168,” ICAP analyst Brian LaRose said in a recent note to clients.

“Bulls need to lift natural gas back above $5.724,” LaRose said. “…See the ratio retracements associated with the $6.466 high as the next challenge if the bulls can get over $5.724. Should the bulls promptly relinquish control instead a test of $4.947-4.921 would be anticipated.”

More volatility is likely, according to the firm, which calculated an average single-session trading range of 54 cents over a recent two-and-a-half-week period.

This volatility coincides with “short-term price-inelastic supply and price-inelastic demand near current levels,” the EBW analysts said. “…While Nymex gas pricing has closely tracked global gas pricing for the past month, there would likely be only modest shifts in supply and demand if domestic prices were to collapse back to $4 or rise to gas-to-oil switching levels above $13.”

In terms of regional price trends in forwards trading during the Oct. 7-13 period, most locations saw fixed prices slide by around a nickel to 20 cents.

As for basis shifts week/week, the OGT front-month basis in the Midcontinent skidded 11.5 cents to trade 28.9 cents back of Henry Hub. Southern Star basis fell 10.2 cents to minus-34.1 cents.

Meanwhile, on the East Coast, Transco Zone 6 NY November prices closed the gap on Henry Hub by 12.0 cents for the Oct. 7-13 period.

Transcontinental Gas Pipe Line (Transco) was set to place more of its Leidy South Expansion into service starting Friday. The expansion would help to open up more capacity from northwestern Pennsylvania to the New York City area, Wood Mackenzie analysts said in a note to clients.