Natural gas traders turned a blind eye to some of the coldest weather of the winter descending upon the country, sending natural gas forward prices plummeting across the country during the trading period from Jan. 13-19, NGI’s Forward Look showed. 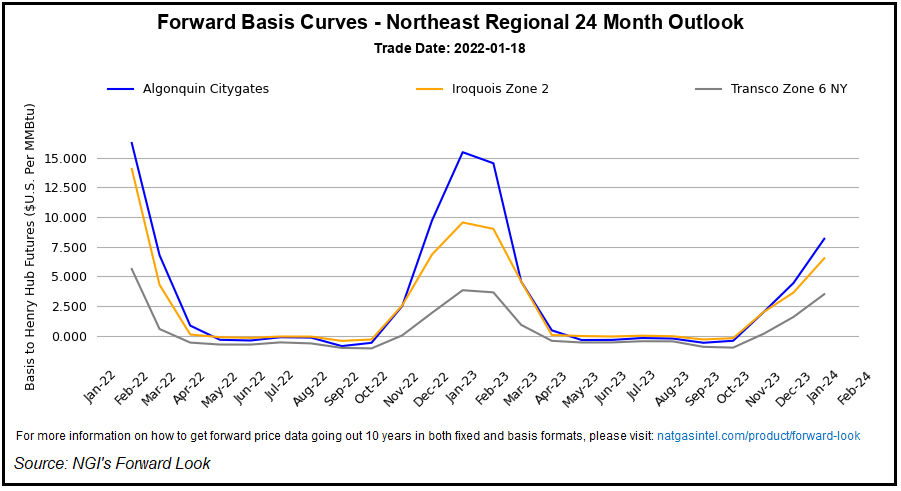 While fixed prices for the February contract came off as much as $2.610/MMBtu at a couple of New England locations, a steep sell-off in basis prices also proved noteworthy. The region is notorious for its volatility during the winter – and sometimes in summer too – and this week was no different.

Facing another blast of Arctic air, this time longer lasting, gas demand is expected to remain strong as temperatures plunged Thursday night. AccuWeather said the polar push would help fuel a snow and ice storm for parts of the South and Atlantic Coast. Through the weekend, the coldest night of the season so far was to occur for many interior areas in the Southeast. Some areas in the interior Northeast could see their coldest night in years.

By dawn on Saturday, AccuWeather said temperatures were likely to dip below zero across a large swath of the Northeast, from eastern Ohio and western Pennsylvania through much of upstate New York and into the mountains of interior New England.

“Pittsburgh is forecast to dip to near zero Friday night,” said AccuWeather meteorologist Jake Sojda. “If the temperature manages to dip a bit more, it would be the first reading below zero since Jan. 31, 2019. In Syracuse, NY, the low temperature is forecast to challenge the record for the day of 12 below zero, set back in 2005. The last time Syracuse dropped lower than 10 below zero was Jan. 14, 2018.”

Nevertheless, the bitter outlook wasn’t enough to stave off the widespread sell-off in the Northeast. At the Algonquin Citygate, February basis declined by $1.920 over the Jan. 13-19 period but remained at a stout $13.727 premium over the benchmark Henry Hub, according to Forward Look. The February fixed price settled Wednesday at $17.758; cash prices averaged above $22.00.

The weakness across U.S. markets is certainly not a reflection of the current demand picture given the biting chill across the country. Instead, it appears traders remain confident that supplies are plentiful enough to meet winter heating needs – even with a string of 200-plus Bcf withdrawals on tap amid the record cold.

Tudor, Pickering, Holt & Co. (TPH) analysts said supply remains topical amid a solid demand backdrop across the residential/commercial, power generation and liquefied natural gas (LNG) export sectors. Questions abound as to the sustainability of recent supplies in the 93 Bcf/d range – not accounting for the weather-induced decline to around 91 Bcf as of early Friday – since output was as high as around 97 Bcf/d at the end of 2021.

“Given the sustainability of supplies in the 96 Bcf/d range prior to the late-December pop, we remain skeptical of the 93 Bcf/d range as the base upon which our forecast growth in 2022 will come,” TPH analysts said. “But, we’ll be keeping a watchful eye on trends in the coming days.”

The TPH team noted a few key developments on the supply front. They said Gulf of Mexico pipeline maintenance appears to have taken around 400 MMcf/d out of the market recently, and the Northeast is down about 1 Bcf/d since late-December peaks in the 35.5 Bcf/d range. There are “other” issues that have lowered output about 3 Bcf/d since late December, according to TPH, “suggesting some noise in the data across various basins.”

The firm said Canadian net imports have proven a solid backstop for the overall supply picture, jumping more than 7.5 Bcf/d on Thursday for the highest level in recent years. The hike is also ahead of the TPH team’s forecast for January. They pointed out that imports were volatile to kick off the new year “thanks to blistering cold in western Canada that forced local demand higher and supplies lower.”

Is The Gas Market Tight?

Against the backdrop of supply uncertainty, the latest snapshot of inventories from the Energy Information Administration (EIA) showed continued tightness in the supply/demand balance. The agency reported a monstrous 206 Bcf withdrawal from storage for the week ending Jan. 14, much steeper than the market was expecting.

Ahead of the EIA report, estimates were wide ranging and as steep as 250 Bcf. NGI estimated a withdrawal of 195 Bcf.

Last year, the EIA recorded a pull of 179 Bcf for the similar week, while the five-year average is 167 Bcf.

Bespoke Weather Services said the 206 Bcf pull was “a very tight number” in terms of the supply/demand balance. Much of this is because of the production declines thanks to freeze-offs, which should be temporary. However, it points to a couple more strong numbers to come.

Indeed, early estimates point to more 200-plus Bcf withdrawals in the next two EIA reports.

Broken down by region, the South Central region led with a 69 Bcf withdrawal, including a stout 48 Bcf pull from nonsalt facilities and a 22 Bcf pull from salts, according to EIA. Midwest stocks fell by 65 Bcf, while the East dropped by 61 Bcf. The Mountain region pulled out 8 Bcf, and the Pacific delivered a modest 3 Bcf.

Is Warmer Weather Ahead?

Meanwhile, there remains some uncertainty over the duration of the current cold. January continues to be rather chilly, with bitter conditions plunging as far south as Texas.

But “things get trickier into February,” according to Bespoke.

The forecaster expects a return of the La Niña state in a more classic fashion, meaning any risk of cold shifts West and warmth can return to the East. “The middle of the nation is more of a battle. We still lean this way, though the overnight runs pushed more chill into the Midwest, something to watch.”

NatGasWeather said the midday Global Forecast System gave back a few heating degree days for Jan. 28-30 as not quite as much cold air is seen arriving in the northern United States. However, the model held solidly colder trends Jan. 31-Feb. 4 by favoring cold air to stubbornly hold across the North. This is where the pattern is back to being “relatively bullish.”

Despite being on board with the gradual warmup, Bespoke noted that production remains very low, down to 91 Bcf as of early Thursday. Furthermore, it may take until late month for production to return, as the cold’s intensity wanes after the coming week.

“All in all, we moved back to neutral, for now, given the production story, and a little more ‘shakiness’ in the last couple of model cycles,” Bespoke said. “But our gun-to-head lean is that price risks are a bit lower” over the coming week.

“The locus of below-normal forecasts in Appalachia and strong cold anomalies extending into Texas, however, suggest heightened caution,” Rubin said. “If outages return towards early-month levels, however, the market could quickly tighten by an incremental 15-20 Bcf/week.”

Ahead of the coming weekend cold snap, Kinder Morgan Inc. posted a notice Wednesday on the El Paso Natural Gas Pipeline warning that the expected weather could limit flows of gas and result in supply shortfalls and power outages in the Lone Star State.

The weather-driven spike in demand comes on the heels of record export demand. LNG feed gas deliveries have crested 13 Bcf/d on several days over the past couple of weeks. Feed gas reached an all-time high of 13.2 Bcf/d on Sunday (Jan. 16) as the sixth train at Sabine Pass continued to ramp up toward full commercial operations.

The near-term bullish backdrop means the gas market could run almost 10 Bcf/d tighter than the five-year average over the next five weeks, according to EBW. This creates the possibility of significant further gains.

“The end-of-March storage trajectory is on pace for 1,400 Bcf, implying an ample cushion and no current storage adequacy concerns,”Rubin said. “Still, tremendous near-term tightening — and price-inelastic demand generating the potential for heightened volatility — together create the risk of the Nymex February contract to push sharply higher over the next seven to 10 days.

After a roughly 23-cent decline on Thursday, the Nymex February contract bounced back on Friday to settle at $3.999, up 19 cents on the day. The March contract edged up 14 cents to $3.782.