After some bouts of unusually hot summer weather, easing demand on the East Coast prompted a sharp sell-off in natural gas forward prices in the region for the Aug. 6-12 period. 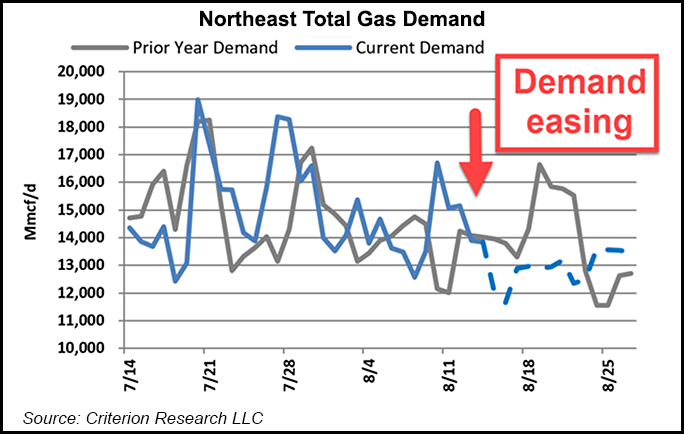 After a much hotter-than-normal July, the stage was set for an active tropical season, and August got off to a busy start. Hurricane Isaias slammed North Carolina as a Category 1 storm before heading up the East Coast, causing heavy winds, rain and widespread power outages that sapped demand. This week, though, heat and humidity returned, and power restoration efforts largely were completed, leading to a surge in demand far above year-ago levels, according to Criterion Research LLC.

The Houston-based firm reported that total Northeast demand soared close to 17,000 MMcf/d on Tuesday, sharply higher than year-ago levels of around 12,000 Bcf/d. However, with temperatures falling back to the 70s and 80s by Thursday, regional demand headed back toward 14,000 MMcf/d and was expected to slip further in the coming days to below 12,000 MMcf/d before recovering back above 13,000 MMcf/d by Aug. 25. Last year, the Northeast experienced a late-season heat wave that boosted demand to nearly 17,000 MMcf/d between Aug. 18 and 25.

A cooler outlook for the remainder of August in the East appears to have minimized the impacts of lower production. On Wednesday, Genscape Inc. reported that the region was leading the large drop in Lower 48 output seen this week, with production down 1.5 Bcf/d from maintenance on the Columbia Gas Transmission (TCO) MXP Line 100 in West Virginia. Production fell 730 MMcf/d in Ohio, 250 MMcf/d in West Virginia and 374 MMcf/d in Northeast Pennsylvania, according to Genscape. The TCO outage is scheduled to last until Sunday (Aug. 16).

The other roughly 800 MMcf/d in dropped production was mostly spread between the Gulf Coast (down 147 MMcf/d), Texas (off 282 MMcf/d), the Midcontinent (down 106 MMcf/d) and the Permian Basin in New Mexico (off 156 MMcf/d), partially because of pipeline maintenance, Genscape said.

At the same time that weather models are starting to hint at cooler patterns along the East Coast, conditions are expected to get progressively hotter out West. NatGasWeather said with the core of the hot upper ridge over the West, highs were forecast to “easily reach” the 90s and 100s across most states, with the hottest conditions over California and the Southwest.

Most other markets across the Lower 48 moved more or less in line with Nymex futures, which fluctuated a bit after last week’s massive rally.

The September contract posted some decent swings of more than a nickel on Friday (Aug. 7) and Monday, but then floundered back and forth throughout the rest of the Aug. 6-12 period. The prompt month ultimately settled Wednesday at $2.152, down about 2 cents from Aug. 6, while the balance of summer slipped a penny to $2.225. Prices through the rest of the curve were marginally higher on the week, with the Nymex winter strip climbing to $2.950 and summer 2021 moving to $2.690.

There appears to be a growing consensus the gas market is on the cusp of a major flip in sentiment as projections for lower production and stronger demand are likely to boost prices this winter. However, there could be several weeks ahead before some of those changes in the supply/demand balance take shape.

Storage inventories already are trending well above historical levels, with the latest government storage data disappointing the market with a higher-than-expected injection. The Energy Information Administration (EIA) said that inventories for the week ending Aug. 7 climbed by 58 Bcf, a figure that fell well within the 42-65 Bcf range of estimates ahead of the report, but was a few Bcf higher than consensus.

Indeed, after sinking well below 3 Bcf/d earlier this summer, LNG feed gas volumes have steadily come in well above 4 Bcf/d over the past week and barring any major new impacts related to Covid-19, analysts see demand growing in the coming months to perhaps as much as 8 Bcf/d by the end of the year.

Traders appeared to not want to move the needle much following the EIA report, as the September contract moved within a tight 6.6-cent range before ultimately settling 3.0 cents higher day/day at $2.182.

Mobius Risk Group said as is often the case, attention may quickly turn to next week’s EIA report, where early indications suggest a generally similar dynamic could play out. With early estimates in the 40 Bcf range, the firm said “a build of less than 45 Bcf could be enough to generate a better bid in the market, and a result greater than 55 Bcf would likely be large enough to meaningfully pressure the front of the curve.”

While the current state of inventories does bring some containment risk back into the market, Bespoke Weather Services chief meteorologist Brian Lovern said the bullish thesis for winter looks sound, weather dependent of course. “It’s also disconnected from what the front does, of course. As in, we could completely fill, and have containment issues, all while not killing the bullish winter thesis.”