For the second time this month, natural gas forward prices rallied sharply as the prospects of stronger export demand had market bulls salivating — and generally ignoring the coming span of moderate weather that stands to topple storage stocks ahead of winter. 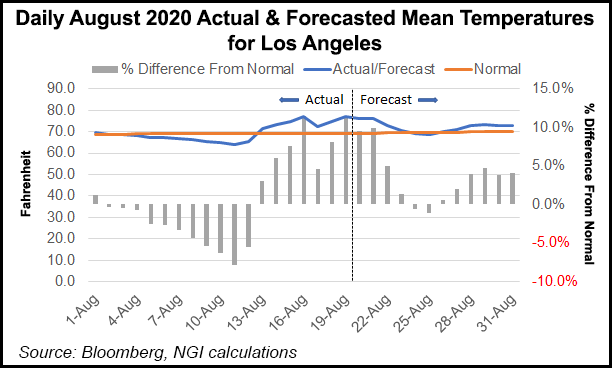 September forward prices jumped an average 21.0 cents between Aug. 13 and Aug. 19, while winter prices (November-March) shot up 14.0 cents on average, according to NGI’s Forward Look. Prices were strong further out the forward curve as well, though gains averaged less than 10.0 cents for next summer and beyond, Forward Look data showed.

The momentum in August, when prices typically reach their lowest point of the year, has been largely because of an increase in feed gas demand for U.S. liquefied natural gas (LNG) terminals. After an unexpected and unprecedented decline in global gas demand amid the Covid-19 pandemic, domestic cargo cancellations ratcheted up over the summer and feed gas volumes sank.

Volumes plunged below 3.0 Bcf/d in July, but the tides appear to be turning. Flows to Lower 48 LNG terminals moved back above 4 Bcf/d over the past couple of weeks and by Friday, edged past the 5 Bcf/d mark.

“LNG feed gas demand continues to surprise to the upside and has been a primary contributor to the Nymex rally,” said EBW Analytics Group.

The firm and other market observers may get further insight on the potential for stronger demand in the coming months. Thursday marked the deadline for Cheniere Energy Inc.’s offtakers to provide advance notification if they do not elect to load cargoes. The company did not comment on the cancellations, but traders surveyed by Bloomberg indicated that fewer than 10 U.S. cargoes would not be loaded for October.

Likewise, Tudor, Pickering, Holt & Co. (TPH) analysts were anticipating “some whisper numbers” around export demand. The TPH team is currently modeling 7.5 Bcf/d of LNG feed gas demand for October, versus capacity of around 10.5 Bcf/d. This equates to 15-20 canceled cargoes from all U.S. terminals.

“Notionally, we see this being around 1.5 Bcf/d more than the global market can absorb, but we expect several cargoes will take advantage of a floating storage arb that is wide open,” TPH said.

Analysts noted that forward prices for both the Japan Korea Marker and Title Transfer Facility support one- or two-month floating storage, for sales into November or December contracts when seasonal demand and prices pick up. For the winter, TPH’s supply/demand balances have U.S. LNG utilization picking back up to around 90%. However, analysts cautioned against extrapolating this across 2021, “as we see the need for material shut-ins re-emerging in 2Q2021.

“We are currently modeling fiscal year 2021 average feed gas demand of 8.5 Bcf/d, versus 7.1 Bcf/d this year, or roughly 80% utilization,” the TPH team said.

Even with growing demand overseas, RBN Energy LLC analyst Sheetal Nasta said U.S. LNG export demand, and the resulting domestic feed gas requirements, would likely remain susceptible to the economic twists and turns of the market, influenced both by domestic factors as well as changes to fundamentals abroad.

However, the analyst pointed out that a liquefaction train is not a system that can respond in real time to daily, or even weekly, market volatility. Instead, it takes facilities time to ramp production units up and down.

“It’s not a process that can be turned on and off daily; and, in fact, it takes planning and coordination between the offtaker and LNG producer weeks and even months ahead of when cargoes are scheduled to be lifted.”

Beyond the time constraints of the start-up and shutdown processes as well as the scheduling cycle, though, liquefaction trains technically have a considerable amount of operational flexibility, Nasta said. “They can — and do — run at partial capacity.”

Undoubtedly, U.S. LNG producers have gotten creative when it comes to optimizing their operations and squeezing out revenue/margins, a reality that “injects many more variables into the U.S. LNG export demand outlook moving forward,” according to the analyst. Cheniere has proven to be successful amid the downturn. The LNG export pioneer earned $708 million in fixed fees from those opting out of lifting scheduled cargoes during the second quarter.

Though winter should bring about increased gas demand in the Lower 48 and abroad, the potential for Covid-19 cases to resume climbing could stop the recovery dead in its tracks if more shut-downs are ordered to tame the spread.

As of Friday, Johns Hopkins University’s Coronavirus Resource Center said the number of confirmed U.S. cases stood at around 5.58 million, with about 174,300 deaths. Most states were reporting a decline in cases.

While that is good news for the domestic economy, the latest jobs numbers weren’t so positive. The U.S. Bureau of Labor Statistics on Thursday reported that about 1.1 million people applied for unemployment insurance last week, up from 970,000 the week before, a sign that new job losses continue to weigh heavily on the economy five months into the pandemic.

Meanwhile, widespread July heat failed to maintain its grip in August, with only temporary spans of extreme heat in core demand regions of the country. Over the past week, much of that scorching weather has been relegated to the West Coast, which does little to move the needle on a national scale.

However, Bespoke Weather Services said the Global Forecast System continued to get hotter and showed more cooling demand than the European model for the next couple of weeks. Both ensembles still suggested a “hot-dominated” pattern, especially the coming week, where a couple of days can challenge daily records for national gas-weighted degree days.

“The main divergence we see in the modeling comes in early September,” where the European model shows a cooler trough diving into the Midwest, while the American model “is not seeing this at all, keeping a stronger hotter ridge over the eastern half of the nation,” Bespoke said.

The forecaster said the American data “does make sense” given the La Niña state, though it has seen occasional variability. Meanwhile, the Gulf Coast may be impacted by two named tropical systems in the coming days, one toward Louisiana/eastern Texas, and the other in Florida. Both demand and production impacts may occur, Bespoke said.

As of Friday afternoon, the National Hurricane Center (NHC) said Tropical Storm Laura could move near or over Puerto Rico Saturday morning, and be close to the northern coast of Hispaniola by early Sunday. Tropical Depression 14, which was to be named Marco once it strengthened, as expected, was tracking toward the east coast of the Yucatan Peninsula of Mexico and could be threatening the central Gulf of Mexico as soon as Monday.

Gains in LNG may help offset the impact of weakening power burn arising from the storms and the end of the summer season, according to EBW. A projected 1.5 Bcf/d decline in dry gas production by the start of winter could incentivize traders to push prices higher to ensure winter supply adequacy. However, the drop-off in weather-driven demand in the coming weeks may still challenge the recent surge in Nymex futures.

Storage inventories are unusually bloated for this time of year, and any unexpected cooler turn in weather could significantly alter the trajectory for the final two months of the injection season. On Thursday, the U.S. Energy Information Administration (EIA) reported a 43 Bcf injection into storage inventories for the week ending Aug. 14, lifting stocks to 3,375 Bcf. Storage is 595 Bcf higher than year-ago levels and 442 Bcf above the five-year average of 2,933 Bcf.

Bespoke, which had projected a 42 Bcf build, said the EIA stat reflected a “notable” loosening in supply/demand balances in its model. Although the 43 Bcf injection was in line with most market estimates, the firm said it may not reflect future balances, given the recent rise in LNG.

“It seems clear to us that higher prices are playing a role in impacting the balance,” Bespoke said, “which is something to consider if LNG does not rip higher” or weather moves away from being bullish.

Broken down by region, the Midwest added 24 Bcf into inventories, which was a bit higher than analysts had projected. Market observers on The Desk’s online energy platform Enelyst said gas is losing out to coal in the region now that prices have climbed, which may have contributed to the large build.

The September Nymex gas contract went on to settle Thursday about 7 cents lower, but then recouped that loss on Friday to close out the week at $2.448.

With temperatures soaring into the 90s and 100s across California and the Desert Southwest the past week, prices in both the cash and forward markets skyrocketed as demand soared. The California Independent System Operator (CAISO) reported peak loads near 47,000 MW on Tuesday (Aug. 18), which fell well short of the all-time peak of 50,270 MW set in July 2006. By Thursday, peak loads were projected to fall to around 46,000 MW, a level expected again on Friday.

With the threat of rotating blackouts on the table, power conservation efforts from the public and further assistance from natural gas suppliers and distributors helped the grid operator avoid the shutoffs. During a briefing on Wednesday, CAISO CEO Steve Berberich thanked industrial operators including Chevron Corp., Tesla Inc. and California Resources Corp., for curtailing operations to conserve power and by selling excess supplies to the grid.

“Monday and Tuesday, conservation was the reason, and probably the only reason, we were able to get through those days,” he said.

As for prices, gains were most pronounced at the SoCal Citygate, where spot gas prices reached as high as $14.00 midweek before sliding back to around $5.00 on Thursday.

Along the forward curve, gains were most pronounced at the front of the curve. SoCal Citygate’s September contract leapt a whopping 84.0 cents between Aug. 13 and 16 to reach $4.07, a more than $1.60 premium over the benchmark Henry Hub. Gains further out the curve were stout, but more in line with the rest of the Lower 48.

In the Rockies production region, Northwest S. of Green River prices for September climbed 19.0 cents on the week to $2.267, while in the Permian Basin, Waha rose 22.0 cents to $1.580, Forward Look data showed.