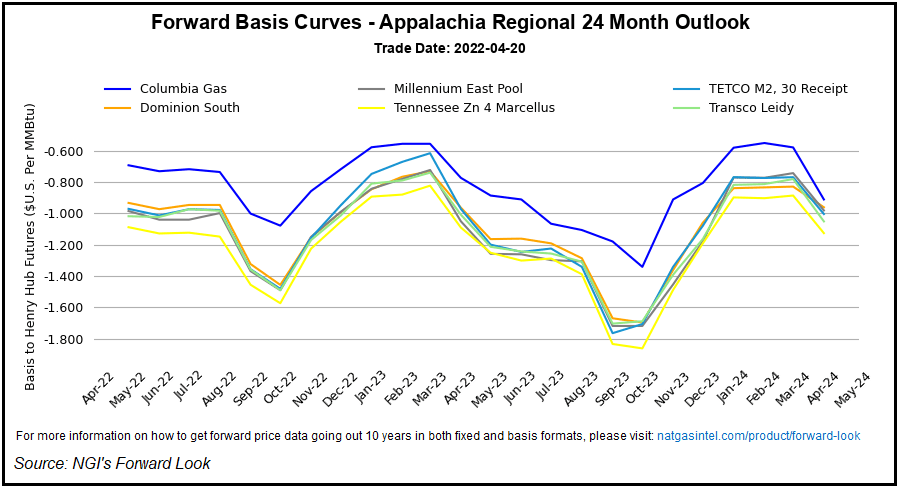 Fixed prices for May delivery at benchmark Henry Hub eased 6.0 cents lower to end the period a hair below $7 at $6.938/MMBtu. In turn, fixed price discounts of around a nickel to a dime were the norm at most locations, though pipeline maintenance appeared to drive steeper declines at a number of Appalachian natural gas hubs.

Meanwhile, Nymex futures had appeared poised to reach beyond the $8.00 threshold, but after setting a high of $8.065 in Monday’s session, the May contract retreated from there. Following a bearish storage miss from the latest Energy Information Administration (EIA) report Thursday, the prompt month eked out a 2.0-cent gain to settle at $6.957. June climbed 3.1 cents to $7.096.

Entering Thursday’s session, it was a technically significant question whether bears could push prices “decisively” below the $7 mark for the June contract, ICAP Technical Analysis analyst Brian LaRose told clients.

“With the June contract just holding above this level, a surge to $8.570-8.606 still can not be ruled out,” LaRose said. “However, for that to happen, the bulls will have to stage an immediate intervention. Should the bulls fail to step in the door will be open for a ‘mean reversion’ and a visit to the 22-day moving averages.”

The latest inventory report offered little incentive for bulls to stage such an intervention and reclaim the momentum Thursday.

Bespoke Weather Services observed that the latest EIA number could represent something of a “make-up” following a bullish miss in the data from a week earlier. “Either way, we have definitely loosened, just based on these last couple of weeks.”

The latest balances would put inventories on a trajectory for end-of-season storage above 3.6 Tcf, according to the firm’s modeling.

“Keep in mind, this is solely extrapolating forward based on the last two weeks, so is prone to large errors,” Bespoke said. “That means we are not in the clear, but this probably limits near-term upside risk.”

As recent price action showed the market making a clear call on supplies, the latest numbers from Enverus point to a modest sequential decline in rig activity. Still, upstream operators have increased development substantially over the past year.

Enverus recorded a three-rig increase in the U.S. count for the week ended April 20, raising the total number of active domestic rigs to 770.

“Activity levels are down less than a percent in the last month and up 49% year/year,” according to Enverus. “The count was as high as 781 in the last week, which is up 12 compared to the prior week’s peak.”

The Permian Basin saw the largest week/week increase, according to the firm, picking up five rigs. Gulf Coast activity, which includes the Eagle Ford Shale, also was climbing in the period.

Meanwhile, the Marcellus/Utica shales dropped three rigs in the latest Enverus count. Two exited the Williston Basin, while the Denver Julesburg Basin saw a one-rig decline for the period, according to the firm.

Eastern Gas South front month basis dropped 17.3 cents to end the period at minus-93.4 cents, while Transco Leidy dropped 20.3 cents to finish $1.019 back of Henry Hub. Millennium East Pool skidded 17.2 cents to minus-98.6 cents. Downstream on the East Coast, Transco Zone 6 NY May forwards tumbled 17.0 cents to minus-83.1 cents.

According to Wood Mackenzie, Millennium Pipeline started maintenance at its Corning compressor station Tuesday (April 19). The work is expected to restrict up to 164 MMcf/d of deliveries into upstate New York via an interconnect with the Empire Pipeline.

Over the prior 30 days, deliveries at the interconnect averaged 139 MMcf/d and maxed out at 190 MMcf/d, Wood Mackenzie analyst Young Liu told clients in a recent note.

“Flows from Millennium onto Empire pipelines at Corning on average account for approximately 25% of all receipts on Empire and will impact Empire’s ability to deliver gas into Upstate New York,” the analyst said.