With natural gas production remaining stout – even amid temporary shut-ins ahead of Hurricane Ian – and cooler weather leaving its mark on storage inventories, natural gas forward prices continued to fall during the Sept. 22-28 week, according to NGI’s Forward Look. 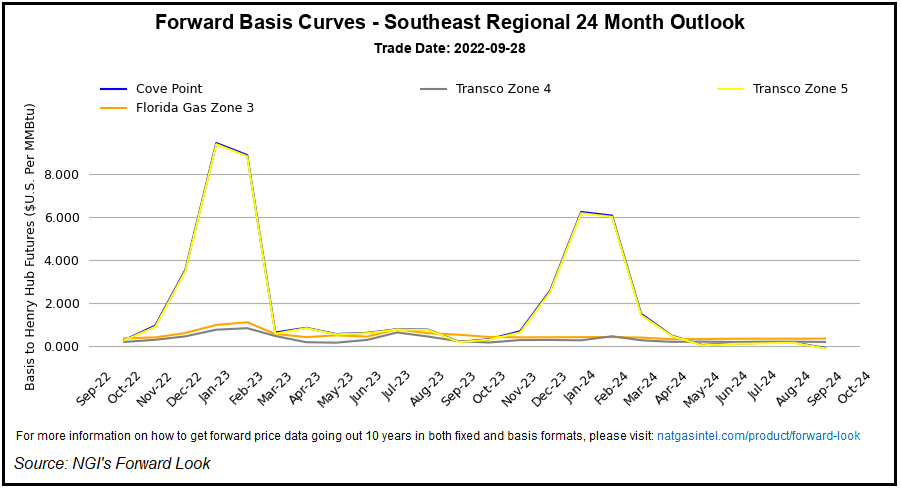 In the latter part of the period, all attention was on Florida, where Ian packed maximum sustained winds around 150 mph when it made landfall on the southwest coast near Cayo Costa Wednesday afternoon.

The system was downgraded to a tropical storm on Thursday but regained hurricane status by early Friday. Ian made a second landfall as a category 1 hurricane near Georgetown, SC, Friday afternoon.

About one million Florida utility customers remained without power as of Friday afternoon, with more outages likely along Ian’s path. The storm killed more than 20, and the death toll was expected to climb substantially. Thousands of residents were unaccounted for Friday, according to the Florida governor’s office.

The governors of North and South Carolina, Virginia and Georgia declared states of emergency in their respective states.

Chevron Corp. and BP plc shut in offshore platforms ahead of Ian, but had begun redeploying offshore personnel and restarted production by Thursday. On Friday, early data pointed to output that was back near recent highs.

October forward prices at Florida Gas Zone 3 – which includes transactions east of Compressor Station 8 in East Baton Rouge Parish, LA, through the end of Zone 3 in Santa Rosa County, FL – came off 43.0 cents to average $7.214/MMBtu for the period through Wednesday, according to Forward Look. This compared with a 22.0-cent decline at the Henry Hub, thereby tightening Zone 3’s premium over the benchmark to 33.5 cents, compared to 60.8 cents a week earlier.

A similar basis contraction was seen for the winter strip (November-March), where Zone 3’s premium tumbled to 37.6 cents from 84.2 cents last week. The five-month package settled Wednesday at $7.657. Basis pricing for next summer (April-October) was stable at 51.0 cents, with fixed prices for the strip averaging $5.400.

Weakening in basis pricing also was seen at Transco Zone 5, which begins at the South Carolina/Georgia border and ends at the Maryland/Virginia border just northeast of Station 185. October prices as of Wednesday stood at $4.500, a roughly $2.38 discount to Henry Hub, Forward Look data showed. A week ago, that discount was $1.855. Notably, the winter strip was down by more than 50 cents on the week but still averaged a plump $10.182. The summer 2023 strip averaged only $3.890.

There is risk for more downside ahead given Ian’s devastating impact and the potentially long recovery ahead.

Florida Power & Light Co. (FPL), the largest electric utility in the state, had restored power to more than one million – or just over 50% – of its customers by Friday morning. As FPL begins assessing the far-reaching damage, the company expects some customers to face prolonged outages because portions of the electric system in Southwest Florida need to be rebuilt rather than repaired.

“Hurricane Ian has forever altered the lives of so many of our fellow Floridians and we recognize the road to recovery will be long and challenging,” said CEO Eric Silagy. “We understand how difficult it is to be without power, and our dedicated men and women will continue to work around the clock until every customer’s electricity is back on. That said, the catastrophic nature of this storm means that we may need to rebuild parts of our system in Southwest Florida, which will take time.”

Duke Energy Florida also had made headway into its restoration efforts, with 650,000 customers restored by Friday afternoon. About 430,000 customers were still without power.

EBW Analytics Group said any delayed restoration of the electric grid in Florida could lead to protracted gas demand destruction lasting multiple weeks, although volumes may be increasingly small. By contrast, near-term demand destruction is set to rise this weekend as Ian’s second landfall extends the cumulative destructive toll.

Het Shah of Analytics.AI agreed the impact to gas demand may be not as significant had the storm landed at the peak of summer. He noted that Florida natural gas consumption in September is between 4.5-5.0 Bcf/d on average, with power burns making up roughly 90% of the gas consumption.

“We also need to remember that this number is front loaded with more cooling degree days at the beginning of the month. So for the last few days of the month, power burn should be roughly 3.8 Bcf/d with normal temperatures,” Shah said. “Assuming 24% of customers are out of power as of Thursday, that equates to 0.9 Bcf/d at the peak.”

Demand should start to recover as power is restored across Florida, according to Shah. “The question still remains on how long it takes to restore power, so some unknowns remain.”

Beyond storm activity, October is expected to be warmer than normal, offering a catalyst for prices to move lower. Independent forecaster DTN’s outlook favors extensive warming across the central United States, leading to a most-likely forecast of only 223 gas-heating degree days (gHDD), which is 25 gHDDs below 10-year normals.

The bearish near-term outlook enables injections to potentially reach into the 120s Bcf per week, according to EBW. Still, the late-October forecast is subject to extensive variability.

“While it is too early in the season to generate substantial heating demand, weather models have cooled in the Northeast” over the past couple of days, EBW senior analyst Eli Rubin said. “If cold builds and November cracks resistance near $7.14/MMBtu, a notable near-term upswing is favored.”

For now, the projected warmth should continue to chip away at the lingering storage deficit. Recent inventory data suggest production growth and declining demand already have had an impact on stocks.

Adding to the bearish picture, Cove Point LNG is scheduled to go offline over the weekend for planned maintenance. The three-week turnaround would trim 800,000 Mcf/d off demand, and potentially shift this gas into storage.

Storage crunch fears for the upcoming winter are dissipating, with recent storage data showing some improvement in inventories.

The Energy Information Administration (EIA) on Thursday reported the second consecutive triple-digit injection into underground storage. The 103 Bcf build matched the prior week’s build and trimmed the deficit to the five-year average by 26 Bcf week/week.

The latest inventory stat surprised the market once again, with consensus ahead of the EIA report in the low to mid-90s Bcf.

Broken down by region, the Midwest led with a 35 Bcf increase to stocks, while the East added 31 Bcf, according to EIA. South Central inventories rose by 23 Bcf, which included an 18 Bcf injection into nonsalt facilities and a 5 Bcf build in salts.

Looking ahead to the agency’s next report, for the week ending Sept. 30, Shah said he’s modeling “a really small impact” because of only two days of hurricane impact. This would equate to roughly 2-3 Bcf of demand destruction.

Despite the larger storage builds of late, deficits have proven to be rather sticky, and the forward curve shape reflects an appropriate concern of insufficient winter supply, according to Mobius Risk Group.

The October contract, fell by more than $2 in less than two weeks’ time, held a roughly 74-cent premium to the March contract when it rolled off the board. October also expired at a $1.91 premium to the October 2023 contract.

“With such a dramatic decline in a brief period of time, it is rational to consider what fundamental changes may be prompting the change in flat price,” said Mobius gas analyst Zane Curry. “However, curve shape is often a better indicator of fundamental conditions.”

He noted that the February contract remained almost $1.00 over March, which held a $1.23 premium to April. “Fall demand weakness is a factor, but not necessarily a reason to believe explosive winter upside is off the table.”

Harping down on recent volatility, Curry noted that the winter strip has been under intense pressure of late. As of Wednesday’s close, the strip priced at around $6.940.

“Over the past month the upcoming winter withdrawal season peaked at $9.34, and the round trip since just after the Fourth of July has been prolific,” he said. “…We have seen this tenor travel more than $6.00 in less than three months.”