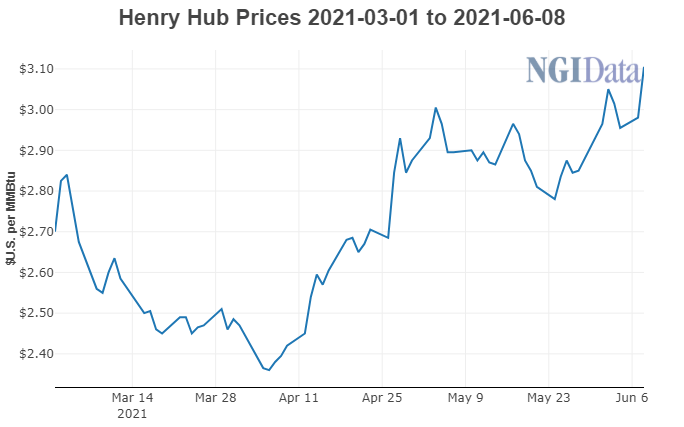 LNG feed gas volumes dipped below 9 Bcf in recent days because of limits largely caused by temporary maintenance work at U.S. export facilities. For much of this spring, however, 11 Bcf or higher – near record levels — has proven common for Lower 48 exports. LNG will likely rebound after maintenance work culminates and continue to prove strong through the summer cooling season, Fowler said.

Demand is steady because European gas storage was depleted over a freezing winter and an usually cool May, fueling the need for U.S. LNG and boosting prices. A rapid economic recovery from the pandemic in China and other parts of Asia is also fueling energy needs across that continent, he noted. Competition among countries in Europe and Asia for U.S. LNG is “phenomenal” and a “very good sign” for near-term prices, Fowler said.

Economic growth across North America along with expectations for another hot summer – following several near-record years of heat over the past decade – likely will drive consistent cooling demand over the next few months, bolstering demand and prices. This is bound to include Mexican demand for U.S. gas delivered by pipeline, he said.

At the same, Andrus said, U.S. production has only inched ahead so far this year. It has hung near 91 Bcf/d so far in 2021. That is a tick above its average from last year, when output declined from 2019 because of the pandemic.

“You’ve got some huge wind at your back as far as the economy goes,” Andrus said. “What we’re seeing is surging demand” and “slight growth in supply.”

He said natural gas prices could average $3.00/MMBtu this summer. Henry Hub natural gas futures have traded above that level in early June.

The assessments at the LDC event followed the latest forecast by the U.S. Energy Information Administration (EIA). It has raised the expected average 2021 Henry Hub price to $3.07, more than $1 above the $2.03 average recorded in 2020.

In the June edition of its Short-Term Energy Outlook issued Tuesday, the agency said its forecast for 2021 prices overall comes in slightly higher than the $3.05 average Henry Hub price it forecast a month ago.

NatGasHub.com CEO Jay Bhatty said at the LDC conference that cash markets are likely to prove strong over the course of the summer in Texas and California, in particular. LNG demand and heat should support Texas prices, while drought and lower hydro generation would require utilities in California to buy more natural gas to avoid blackouts.

Though California lawmakers are championing the use of renewable fuels, Bhatty said utilities are under pressure from consumers to ensure steady energy supply this summer. “Reliability first — and then greenness,” he said.

Senior meteorologist Dan Leonard of The Weather Company said climate change has and almost certainly will continue to drive intense summer heat for years to come, this year included. “There’s really no debate about it,” he said.

The 2021 Farmers’ Almanac forecast called for above-average heat across two-thirds of the Lower 48 this summer, with lofty temperatures extending into September.

Leonard said it was too soon to make reliable forecasts for the next winter. He said as Earth warms, winter temperatures on average are likely to climb. However, he said, a warmer planet also creates more energy that fuels extreme weather events like Winter Storm Uri, the Arctic blast that pummeled Texas earlier this year. Gas prices spiked in mid-February amid Uri, which brought freezing conditions as far south as the Texas border with Mexico.