The losses continued for natural gas forward prices during the Sept. 10-16 period, with cooling weather and increasing storage concerns pouring salt in the wound left by the lingering shutdown of the Cameron liquefied natural gas (LNG) export terminal in the wake of Hurricane Laura. 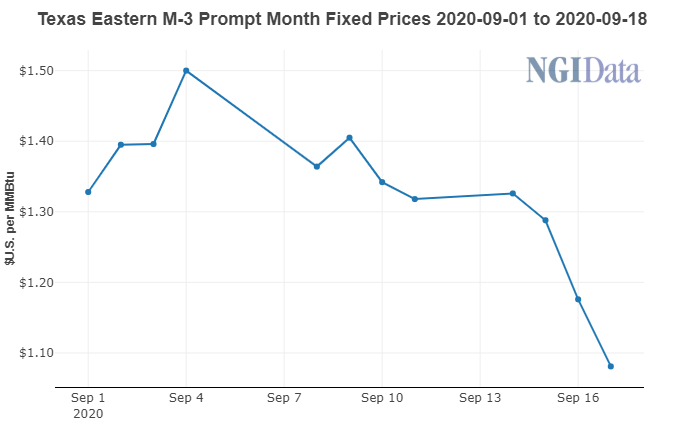 October natural gas fell an average 7.0 cents over the six-day period, while November tumbled a more substantial 14.0 cents on average, according to NGI’s Forward Look. Prices for the full winter strip (November-March) were down 8.0 cents, and a smaller decline of only 2.0 cents on average was seen for summer 2021.

However, prices plummeted to fresh lows Thursday after the latest government storage data provided a dose of reality to traders who had propped up October prices a bit too much in recent weeks given supply/demand balances.

With LNG exports still hampered by Cameron’s shutdown and a very moderate weather outlook for September and early October, fundamentals were clearly bearish for the prompt month and yet prices had soared above $2.60 even after Laura made landfall.

“Bulls in the natty market gave it their all, but market reality is setting in,” said analysts at The Schork Report. “At this point, it is but a foregone conclusion that we will enter winter with Lower 48 underground storage of natural well in excess of 4.0 Tcf.”

The Energy Information Administration (EIA) on Thursday reported that inventories during the week ending Sept. 11 jumped by a whopping 89 Bcf, lifting total working gas in storage to 3,614 Bcf. This is 535 Bcf than year-ago storage levels and 421 Bcf above the five-year average.

“We are three-quarters of the way through refills, and the market has replaced more than 90% of the gas that was delivered last winter,” said The Schork Report.

Analysts were anticipating a high-side storage build, with estimates in major polls ranging from a 68 Bcf build to an 85 Bcf injection. NGI’s model predicted an 84 Bcf injection. However, participants on The Desk’s online energy platform Enelyst were stunned when the EIA figure hit the screen.

“This is the classic problem of natural gas: prices affect balance,” said NatGasWeather analyst Andrea Paltrinieri. “We needed LNG to avoid the catastrophe.”

The restart timing of the Cameron LNG facility remains unclear since power first must be restored to the terminal following Laura. Unlike most U.S. export facilities, Cameron relies on an outside utility for its power needs, rather than having on-site electric generation.

Entergy Corp. has worked feverishly to get electricity back up and running to the hundreds of thousands of customers that had their power knocked out as the Category 4 storm crashed ashore Lake Charles, LA, on Aug. 27. The utility said power has been made available to nearly 90% of the essential customers in southwest Louisiana that can safely accept it, including most hospitals and water and waste treatment plants. Once essential services are restored, Entergy then would prioritize work to restore the greatest number of customers at one time.

As of 7 p.m. Sept. 17, about 31,300 outages remained in the Calcasieu and Cameron parishes, down from a peak of around 93,000 outages. Over the course of the storm and restoration, the company has restored more than 417,000 individual outages in Louisiana.

At a minimum, expectations are for the Cameron export facility to remain down through October, which would keep U.S. LNG capacity utilization around current levels, according to Tudor, Pickering, Holt & Co. (TPH) analysts. The TPH team pegs current U.S. LNG utilization at around 90%, averaging 7.4 Bcf/d over the past week, without any contribution from the roughly 2 Bcf/d Cameron facility.

“However, despite the extended Cameron outage, current feed gas demand is still exceeding our expectations for September, and current volumes are in line with our October forecast of 7.5 Bcf/d,” TPH analysts said. “Therefore, from a macro perspective, the extended outage has little impact on end-of-season storage balances, with potential bullish upside if Cameron resumes operations in early October.”

That said, there are some storage concerns at the regional level, especially in the South Central, where a massive 33 Bcf was injected during the reference week, according to EIA. Nonsalts added 19 Bcf into storage, while salts added 14 Bcf.

Analysts also noted the storms currently churning in the Gulf of Mexico. Though most are not expected to impact the U.S. onshore, the cooler temperatures resulting from the weather systems were seen lowering demand. In population-dense Houston, morning temperatures in the coming days were forecast to start out in the mid- to upper 60s, levels typically not seen for a few more weeks.

“There is nowhere to take gas with LNG off so much,” said one Enelyst participant.

Enelyst Managing Director Het Shah agreed that it would be difficult to continue injecting into South Central facilities with inventories sitting so high already. “Cash is going to get smoked in so many places.”

However, Genscape Inc. senior natural gas analyst Eric Fell said he believes that salt injections would continue since spreads between the October Nymex contract and winter months are so wide. “They will inject until they get closer to 90%.”

TPH analysts said with Sabine Pass ramping back up and Cameron expected to return in the next two to three weeks, “we think storage will be able to sneak by.”

Elsewhere across the Lower 48, Midwest inventories rose by 30 Bcf, according to the EIA, while East stocks grew by 20 Bcf. The Mountain region added 5 Bcf, and the Pacific added 2 Bcf.

As it stands now, weather models are showing a generally warm pattern in the northern half of the nation heading into the final third of the month, while the South is largely void of any heat relative to normal, according to Bespoke Weather Services. At this point in the year, this becomes a “very low demand regime” by way of reduced early-season heating degrees days in the north and a lack of material cooling degree days in the South.

“This is still the type of pattern we expect to hold into October as well, keeping demand rather low as we head into the fall season,” Bespoke chief meteorologist Brian Lovern said.

Meanwhile, the tropics are especially active. Though two named storms in the Atlantic Basin are not seen impacting the U.S. onshore, tropical depression 22 in the Gulf of Mexico was being closely monitored. The National Hurricane Center expected the storm to reach close to hurricane strength by Sunday as it moved slowly toward southeast Texas.

The storm could prompt offshore evacuations and production declines as seen with Laura and Sally, but it could also cause major disruptions to LNG, industrial and power demand, according to Genscape Inc.

“The path, strength and timing of the storm are critical for determining these impacts, but there’s too much uncertainty to draw any concrete conclusions at this point,” said Genscape analyst Dan Spangler. “However, the Corpus Christi LNG export facility is a potentially high-impact risk in the vicinity.”

As for demand, EBW Analytics Group sees cooling degree days falling to only 28 in the week ahead, but said rising early-season heating demand could narrow demand losses to only 2.0 Bcf/d week/week. However, in the Northeast, the low-demand outlook could lead to more shut-in production, the firm said, adding to the 1.0-plus Bcf/d of publicly announced shut-ins by EQT Corp. and CNX Resources Corp.

“While the near-term weather may be priced into the market, the potential for additional shut-ins is not,” EBW analysts said. “Instead, should production appear to be falling, it could help lift Nymex futures contracts.”

TPH analysts agreed. With the deep dive in Nymex Henry Hub futures, Northeast basis points are widening and outright prices at major Northeast hubs now are under $1.00 “which, if sustained, we think will drive further curtailments and tighten the market,” the TPH team said.

“On the flip side, if the market gets comfortable that storage will be able to sneak by, we expect material price appreciation in the front end of the curve…”

Over the next month and a half, a more bullish sentiment should return to the market, according to EBW, with a strong likelihood of rising LNG demand, falling production and the market refocusing on the supportive winter storage trajectory. Cooler weather could further amplify any rally, “but there is a risk of low spot prices and persistent 2020 storage containment fears further deferring likely gains,” it said.

Bespoke’s Lovern agreed the bullish case for winter is still there, but said it’s finally clear to the market that it was “silly to allow the front to participate in the rally.”

However, the analyst warned that “just as the market loved to react too strongly to the upside previously, there is the risk that it is correcting too much to the downside now, at least in the winter and Calendar 21 part of the curve.”

The bullish case “still exists there, whether we have containment or not,” Lovern said.

The October Nymex gas futures contract, which was at $2.323 on Sept. 10, plummeted to $2.042 on Thursday. On Friday, bulls were trying desperately to keep the prompt month above water, with prices sinking to a $1.926 intraday low before going on to settle at $2.048.

Northeast forward markets barely batted an eyelash at EQT’s newest round of supply cuts in Appalachia, with prices across the region and in downstream markets plunging in response to the mild fall outlook and weak cash market.

Similar price patterns were seen on other pipelines across Appalachia.

During EQT’s second quarter earnings call in July, management noted that it had returned to sales the 1.4 Bcfe/d it took offline in May in response to the oil market downturn and Covid-19 pandemic. However, additional curtailments were possible, they said, though minimum volume commitments (MVC) it has on pipelines needed to be considered.

Based on Wood Mackenzie’s model, it seems that the MVC level, which would act as a “production floor,” is likely close to 3.1-3.2 Bcfe/d given that EQT’s production levels have never breached this threshold during the past two curtailment events.

“Dipping below that level, assuming it is their MVC, would spur additional costs and penalties, which is the opposite of EQT’s cost reduction mantra and would eat into some of the arbitrage” that management noted on the call, said Wood Mackenzie analyst Brandon Lee.

There doesn’t appear to be much improvement for in-basin pricing for October based on Tetco M3 forwards either, so it would make logical sense for EQT to bring these volumes back sometime in early November, Lee said, as Tetco M3 prices at that time are currently around $2.40.

“In the near term, EQT will likely need to revise their 2020 fiscal year production guidance lower during 3Q2020 earnings, but the strategy makes fiscal sense as they are able to reduce costs, specifically production/workover costs, in the weaker-priced shoulder season while increasing their molecules’ exposure to the more premium winter pricing,” Lee said.