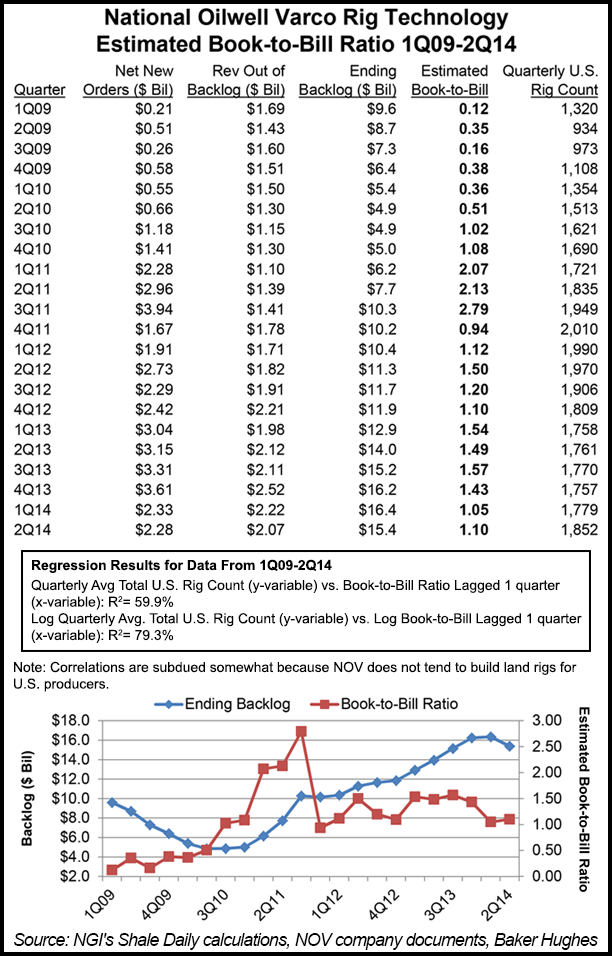 CEO Clay Williams presided over a conference call on Tuesday to discuss the results.

“We are seeing the major North American shale plays growing, domestic E&P [exploration and production] wellhead cash flows are rising with increasing production and strong commodity prices, and producers are choosing to plow back more their cash into new shale drilling,” Williams said.

“Our activity gains were partly offset by seasonal breakup in Canada, our outlook for Canada is strengthening for the second half. Activity is leading to rising demand for fracture equipment, coiled tubing units and for newbuild land rigs required to maximize shale drilling efficiency, adding to continued strong land rig demand overseas, particularly in Latin America and Middle East.”

The second quarter “was a historic quarter,” Williams said. “In addition to posting strong operating results, and securing $3.4 billion in new capital equipment orders, we…created additional shareholder value by both successfully completing the spin-off of our distribution business, and increasing our regular dividend by over 75%.”

At the end of May NOV completed a spinoff of NOW Inc., its distribution business, which created two separately traded companies (see Shale Daily, May 2). The latest results marked the first quarterly report for NOV based on four reporting segments: rig systems, rig aftermarket, wellbore technologies, and completion and production (C&P) solutions.

“As we move through the second half of 2014, we look forward to continued demand for our drilling, completion and production equipment, and continued strong results from our four new segments,” Williams said.

Orders for technology equipment continue to rise, he said.

Backlog in the rig systems segment climbed 20% in 2Q2014 from a year ago to $15.39 billion and was up 1% sequentially. The new orders in the quarter were offset by revenues out of backlog of $2.1 billion, resulting in a book-to-bill of 1.1 times, up slightly from the 1.05 ratio the previous quarter.

The book-to-bill ratio represents the amount of additions to the backlog, divided by the amount of revenue that was booked from backlog in that same period. The ratio doesn’t explain 100% of the backlog changes from period to period, because it doesn’t incorporate, among other things, turns business (orders taken and filled in the same period), cancellations and order push-outs. Book-to-bill ratios above 1.00 generally indicate that backlog grew during the measurement period.

The backlog for capital equipment orders in the completion and production (C&P) solutions segment was $2.14 billion, up 32% sequentially and 44% more than 2Q2013. New orders totaled $1.12 billion.

Between January and March, the backlog for capital equipment orders within NOV’s rig technology segment had scored an all-time high of $16.35 billion (see Shale Daily, April 28).

“Again, our backlog should help sustain results for the former for the next several quarters, while rising demand should strengthen the latter for the next several quarter,” said Williams. “During the second quarter, the rig system segment won orders totaling $2.3 billion, up 8% from the first quarter and its book-to-bill was 110%, lifting backlog to a record level of $15.4 billion for the segment. Backlog for rig systems is up 2% since year end 2013 and up 41% since year end 2012.”

Orders for the C&P segment “were extraordinarily strong, $1.1 billion for the second quarter, more than double first quarter orders and representing a book-to-bill of 186%. Growth was across the board.”