Natural gas, which surpassed coal’s share of domestic power generation for the first time ever last spring, is likely to make 2016 the first year that gas-fired generation exceeds coal generation in the United States on an annual basis, according to the Energy Information Administration (EIA). 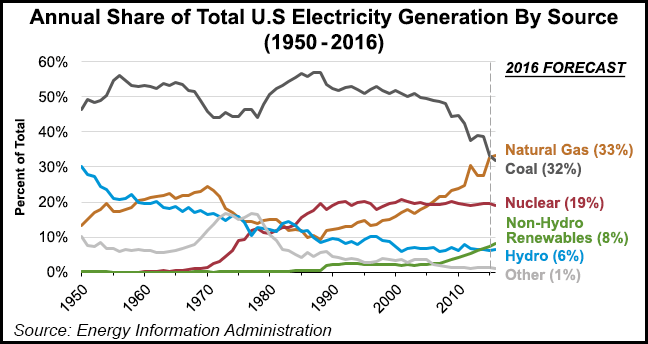 “Looking forward, environmental regulations may play a larger role in conjunction with market forces. Owners of some coal plants will face decisions to either retire units or reduce their utilization rate to comply with requirements to reduce carbon dioxide emissions from existing fossil fuel-fired power plants under the Clean Power Plan, which is scheduled to take effect in 2022 but has recently been stayed by the Supreme Court pending the outcome of ongoing litigation” (see Daily GPI, Feb. 10).

Despite the uncertainty created by the Supreme Court’s decision to temporarily block the Clean Power Plan, some of the nation’s largest electric utilities predict their industry would not be dissuaded from retiring coal for power generation and would continue to embrace natural gas and renewables (see Daily GPI, Feb. 11).